Washington: Senator Lamar Alexander said President Donald Trump lost the 2020 presidential election and needs to "put the country first," calling on him to formally concede to President-elect Joe Biden during an interview Sunday on NBC News' Meet the Press.

Alexander noted "the courts have resolved the disputes" Trump and his allies levied at states where he narrowly lost to Biden. Alexander also said he hoped Trump would congratulate Biden on his victory and then "helps him get off to a good start."

On Friday, the Supreme Court rejected a lawsuit from Texas Attorney General Ken Paxton, which was supported by 18 other Republican attorneys general, seeking to block the electors from four battleground states from voting for Biden when the Electoral College meets on Monday. 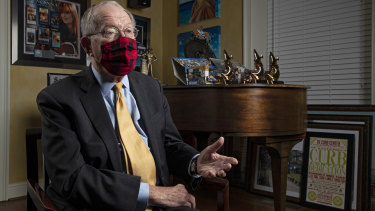 The court's decision was widely seen as the final nail in the coffin for the Republican efforts to overturn the election results.

Alexander's comments come as Republican officials and rank-and-file voters across the country grapple with Trump's defeat. The Tennessee Republican is now among a small but growing number of GOP lawmakers calling on the president to end his battles and allow for an orderly transition of power.

"People can make their own judgment about whether the president's acting appropriately or not," Alexander told NBC News, but also noted that "to threaten election officials is a deplorable thing to do."

Alexander also argued that "the president's conduct, his behaviour, plus the difficulty of governing the country during a pandemic, are the two reasons that he will have lost on Monday if the electors vote for Biden."

While some high-profile Republicans like Alexander have criticised the president's behaviour since losing the election, many have stood by the president, including more than 60 per cent of House Republicans who supported Trump's most recent failed effort at the Supreme Court.

House Minority Whip Steve Scalise was criticised on Fox News Sunday for his support for the lawsuit, with host Chris Wallace arguing that the Republican members were "talking about disenfranchising the 10 million Biden voters" in four battleground states Biden won.

Scalise replied that "Joe Biden has been going through a transition with President Trump supporting him," adding, "Let's let this legal process play itself out."

Scalise did not mention that the Trump administration remained obstinate in its refusal to work with Biden's transition team until three weeks after the presidential election.

Alexander said Sunday, "I think the most important thing for our country, as George Washington said when it was founded, is not the first election, but the second election, the orderly transfer of power. I think anything that detracts from that is not good for our democracy."

He urged Trump to "take pride in his accomplishments" while in office, including the Republican 2017 tax law, widespread deregulation and a historic number of conservative judges to the federal judiciary.

Of a potential Trump run in 2024, the senator observed that "he'll be a force in our party and in our country for as long as he wants to be."

Alexander, who did not seek re-election in 2020, has opined about the nation's high political polarisation, saying in 2018 he "still think it's possible to get a lot done. I just wish it were easier."

He will be succeeded by former ambassador and private equity executive Bill Hagerty in the incoming Congress.