Home » Revealed: The plot to hijack Prince Philip during visit to New Zealand 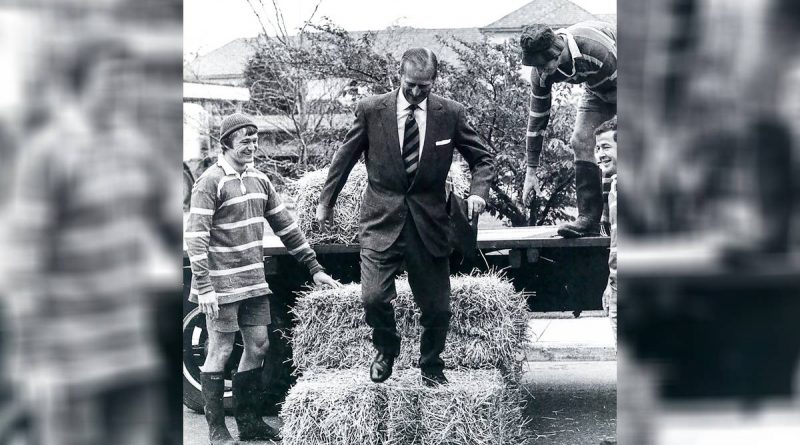 Prince Philip was “hijacked” from his Rolls Royce on his way to Lincoln College during a visit to New Zealand.

But, not only were police and his own security team aware of the plot – they helped facilitate it.

It was 1973 and the Queen’s husband was about to visit the university when his motorcade was intercepted by a group of students and he was put onto a tractor and trailer that had hay bales and pitchforks on it.

It was a prank dreamed up by some of the students – and one Prince Philip was happy toplay along with.

“The Duke was coming to visit Lincoln College because he had quite a strong interest in agriculture,” former student Alastair Mackintosh told the Herald.

“A few of us got together and thought it would be very nice if we hijacked him with a tractor and trailer and bales of hay, and take him in to Lincoln.”

The journey was only about 500m, but getting it ticked off by officials was no easy task.

After a few meetings with the police chief, they were eventually given the green light.

“We met the Duke on the main road into Lincoln and he came aboard our trailer with the bales of hay … when the Prince got out of his Rolls Royce his briefcase fell out onto the road, I said, ‘I hope your lunch isn’t there.’

“We drove him in to Lincoln and he chatted away to us like the lovely man that he was.”

The others on board included Roy Day, the late “Blue” Hughes, Hugh Gardyne and Wayne Carlton.

However, Mackintosh said it wasn’t the tractor ride that shocked the dignitaries, rather his mate, the late Bernie Davidson, who dressed up in pink long johns and suit jacket, pretending to be the Prince.

Davidson’s son, James, today shared the group’s hijinks on social media, complete with a few photos from the university’s collection.

Their plan was set in motion to intercept the Prince’s motorcade which would see him loaded onto a tractor and trailer and taken down to where a group of delegates waited.

Mackintosh was one of the mates on the trailer, which they’d littered with hay bales, also using them as steps for the Prince to get off and on.

“I was talking about that this morning, actually,” Mackintosh said when he was approached by the Herald this afternoon to elaborate on the story.

But there was another mate – Davidson – getting up to more mischief.

Dressed in a top hat, dinner jacket and tie, and pink long johns, Davidson was driven in an Austin with the words “Britannia Wagon”, ahead of the Duke’s vehicle, with it pulling up in front of awaiting officials.

“Bernie, he was a great big tall guy with red hair and so they got this old Austin and had a driver and they come squealing in … and Bernie gets out and he’s got this umbrella, a top hat, a dinner jacket and a tie.

“They couldn’t do anything about it, really … he shook hands with them all, said something, then he walked back down the carpet and they sped off.

“Bernie was such a character, he was so dry.”

It was then that the Duke of Edinburgh was brought in on the tractor. The only condition from his security team was that he was to sit on a blanket – so he wouldn’t be getting hay on his trousers.

He said those involved in the prank, apart from the late Davidson and Hughes, still talked about it at their five-yearly reunion, a topic which would no doubt pop up again when it’s time to reunite in two years’ time.

“He was such a nice guy, honestly. He was great, he really was, he thought it was a nice prank, a nice touch.”