‘No one there, no music, nowhere to buy a cold beer’: Revellers rage as £60 reggae festival is total washout with dismal turnout… as organisers admit ‘it didn’t go to plan’

Revellers have slammed a reggae festival after claiming more fans turned up than musicians.

Hundreds of people were expected to attend the first ever Love, Peace and Reggae Festival in Dover last weekend but customers said crowds ‘peaked’ at around 50.

The weekend event, which cost £55 to attend both Saturday and Sunday, also saw one band play to just four people.

Other acts had to wait for people to turn up before blasting out tracks on two stages at the festival.

Complaints about the festival at the 500-capacity Chilli Farm in Dover included lengthy delays in entertainment and a lack of food and alcohol. 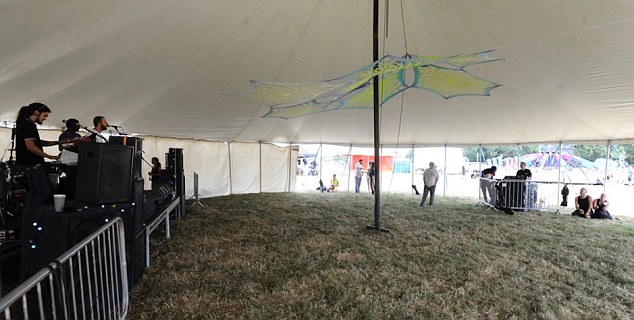 Revellers at Love, Peace and Reggae Festival in Dover have complained about delays in entertainment and a lack of food and drink amid claims crowds reached peak sizes of just 50 and bands played to empty tents, pictured

Among the acts on show included headliners General Levy and Talisman, along with other acts Kingsley Salmon, Royal Sounds and Mr Rude – as well as Reggae DJs.

Although festival bosses wouldn’t confirm the exact number of revellers who attended the festival, some revellers said it was ‘lucky’ if more than 50 people were there at ‘peak time’.

Christene Bosch said she turned up after paying £32 online for a single day ticket, but found there was ‘nothing happening’.

Writing on the festival’s Facebook page, she said: ‘Was honestly very disappointed. I first paid £32 for a ticket online, clicked on the map link which took me to Lenham [40 miles from the festival] to some farm in the middle of nowhere.

‘I eventually made it to the event after midday. It said that it was open at 10am, there was no one there, no music, nowhere to buy a cold beer.

‘The guys behind the food stand were friendly and great but after an hour of nothingness and being stung by a wasp, I left.’

She added: ‘I am not from Kent so I wouldn’t have known any different about the wrong address you provided on the Facebook site.

‘It cost me £20 in petrol just riding around for two hours. There was little to no information about the going ons of the event, just who was playing. 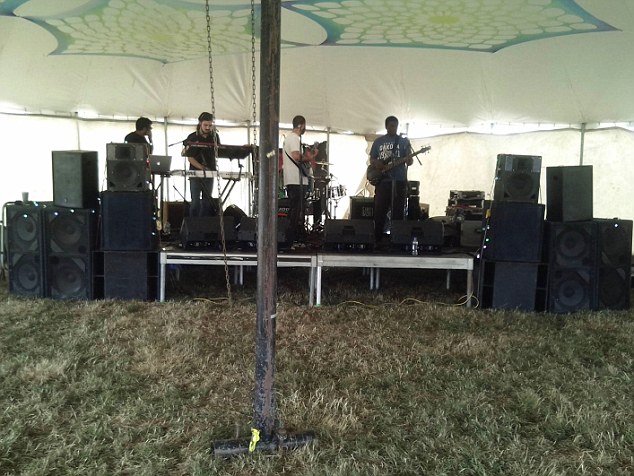 One act performed in front of just four people, according to disgruntled customers

‘Really sad at how much I spent for nothing.’

A spokesman for the festival wrote back to the reveller apologising, stating: ‘I am so sorry you had a bad experience at our first event, I have taken note of some of your concerns and will try an address them seriously.

Heather Roberts wrote: ‘Unfortunately this event was not organised nor advertised as well as it could have been

‘Music was good when the bands finally started at 5pm – bear in mind the event opened at 10am.

‘Massive gaps in music and I had no idea who was playing nor when – I waited till 8 thinking it would improve – it did not.

Another festival-goer, Craig Taylor said: ‘There were more musicians at the festival than people who had bought tickets.

‘Some groups had to wait for ages before anyone turned up to watch them, and then it was only a handful of people. I feel sorry for the organisers, but it really was pretty disappointing.’ 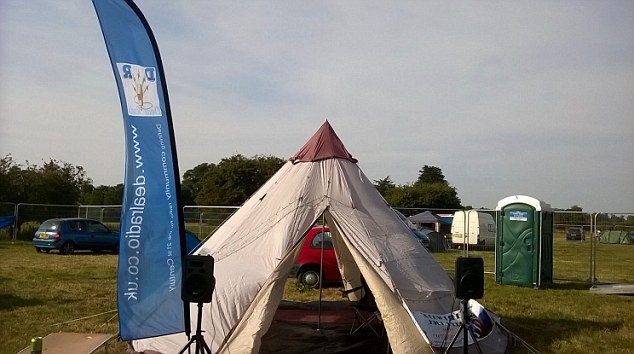 Organisers of the festival said they would learn lessons ahead of the next event and apologised to upset customers. Pictured is a tent at the evenet

Valentine Smith wrote: ‘I came with my wife on Saturday and had a brilliant time! The bands were fantastic and we enjoyed the Caribbean food.

‘It’s a shame that there wasn’t a bigger turn out for you.’

A spokesman for the Love, Peace and Reggae event said: ‘We were very disappointed with the low turnout, despite the fact we reached over 20,000 people through social media.

‘I am sure you will appreciate this is our first year and with all our best intentions, problems will arise and it is sad the festival didn’t go as we planned.

‘It’s been an amazing journey, at times challenging.

‘There are so many lessons to be learned and we are eager to resolve them for future events and hope people will give us a chance.

‘We hope the community will stick by us and help us to accomplish our mission to bring quality reggae on our door step.’