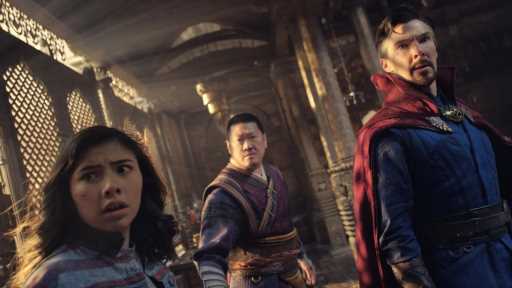 With a name like “Dr. Strange in the Multiverse of Madness,” arguably the pulpiest in the Marvel Cinematic Universe, there’d better be ample strangeness. And yet this roller coaster of sorcery and witchcraft isn’t so much strange as colorful, like a bunch of balloons with scary masks.

The MCU’s first-act contrivances and dialogue dumps are still there, as are the unpredictable cameos (cool but less thrilling than expected). But when it rises above — or, at times, below — all that, it smacks of its legendary director, Sam Raimi, and his fun-loving tastes. He’s of “Evil Dead” and early 2000s “Spider-Man” fame, and his devotion to gore and cheap scares gets solid play here.

It’s also an intense PG-13 for an MCU movie, particularly in a scene where a sorcerer burns to ashes and the camera never waivers. Intense, but no less friendly to younger viewers than the violent, macho, military industrial complex-mythmaking of the first few “Iron Man” movies. This is horror-lite spookiness, not technological bluster.

The story picks up not long after Dr. Strange (Benedict Cumberbatch) knitted realities back together in December’s “Spider-Man: No Way Home,” having indulged Peter Parker’s (Tom Holland’s) scheme to save his friends. Silly me — I thought the previews of “Multiverse” showed Strange being punished for that.

Nope. This movie starts with a completely unrelated narrative featuring a variant of Strange (Defender Strange) and America Chavez (Miss America in the comics), played with wide-eyed quietude by MCU newcomer Xochitl Gomez. They’re tumbling through a purple space between universes to grab the Book of Vishanti, a collection of all-powerful spells.

We’re led to believe this opening sequence was a disorienting dream as Strange awakes, using his powers to dress himself up for a wedding. And yet those powers, whether reality-changing or conveniently restrained, still couldn’t save him from losing a relationship with the love of his life, Dr. Christine Palmer (Rachel McAdams, reprising her role from 2016’s “Dr. Strange.”). He swings by her wedding but has to jet to — what else? — save New York City from a slobbering CGI monster.

That one-eyed octopus beast is after our new character, America Chavez. In a sign of things to come, Raimi takes their battle to a pulpier place than most MCU films, save for maybe Taiki Watiti’s “Thor: Ragnarok,” with a giant, punctured eyeball and lots of hacked limbs. Chavez tells Strange she’s a multiversal traveler, despite looking like your average 2022 Earth teenager, and that she can’t control her power, which manifests as a glowing, star-shaped portal into other universes.

Strange didn’t dream her the night before. Dreams, she says, are actually windows into the lives of our multiversal variants. It’s all really happening, somewhere. After long stretches of dialogue and serious expressions, Strange and Wong (Benedict Wong), who’s now the Sorcerer Supreme at Kamar-Taj, discover that the eyeball monster was summoned with witchcraft, not magic. Where is this all leading?

To the Avengers’ Wanda Maximoff, a.k.a. the Scarlet Witch, who’s apparently resting after the events of “WandaVision.” That’s the Disney+ series in which the character, portrayed with quiet power by Elizabeth Olsen, brainwashed an entire town into loving her and her fake family.

Her journey in “Multiverse” is teased in “WandaVision’s” final episode, and one could argue she’s the main character of this film. Yes, that’s homework, or at least streaming-FOMO for people who didn’t see the TV series. (Same with the “Loki” series, whose timeline-scrambling story feels like it should be related to this film, but doesn’t seem to be. Yet?)

Conflicts hinge on ephemera that’s suddenly thrust into starring roles: the Darkhold (evil spells that make the caster evil), the aforementioned Book of Vishanti, protection runes, ancient thrones and dreamwalking. Wanda is starting to think that her children, which “WandaVision” depicted as a projection but which are now revealed to actually exist in other universes, need her.

Raimi, with an overwrought score from old buddy Danny Elfman, tries to soft pedal the wreck of the script in favor of red-eyed monsters, a minotaur, a zombie, and evil twins. It’s delicious melodrama at times, cut alternately by straight humor and gravitas. As messy as it looks on paper, it’s never less than visually stunning. But it also could have been titled “Close Up Magic,” “Everything’s Red All the Time” or “Soul Suckers Sucking Souls,” as that’s how pretty much every scene plays out.