Home » World News » Reviving a Crop and an African-American Culture, Stalk by Stalk 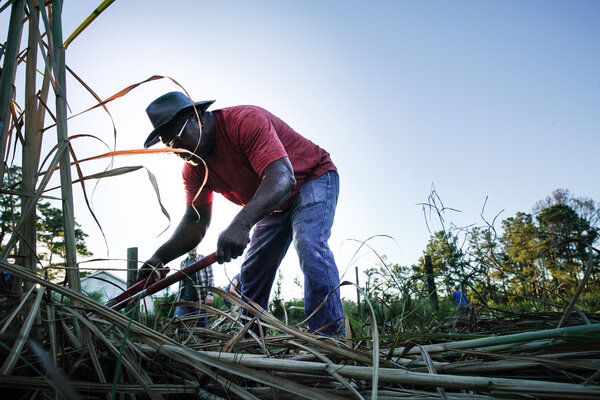 On the Georgia coast, Maurice Bailey is making sugar cane syrup as a way to preserve a tradition, and the community, of his enslaved ancestors.

SAPELO ISLAND, Ga. — Fall is cane syrup season in pockets of the Deep South, where people still gather to grind sugar cane and boil its juice into dark, sweet syrup in iron kettles big enough to bathe in.

Homemade cane syrup used to be the only sweetener that some families in rural communities could afford. Not many of those sugar shacks remain, so a jar of well-made local syrup, with its sweet, grassy notes and molasses backbeat, is as prized as the first pressing of an estate olive oil.

This autumn, no cane syrup has been more significant than the batches Maurice Bailey and his friends made from the first purple ribbon sugar cane grown here on Sapelo Island since the 1800s.

The 11-mile-long barrier island is home to the Salt Water Geechees, who can trace an unbroken line back to about 400 West Africans who were enslaved and put to work growing a type of sugar cane that their descendants are now trying to revive. Almost all of the island’s 16,500 acres are in public hands, save the land in and around the community of Hog Hammock, where fewer than 50 people still live.

Members of the Sapelo Island Cultural and Revitalization Society hope that selling cane syrup will preserve Salt Water Geechee culture and protect the precious remaining pieces of property that haven’t been lost to developers or to pay tax bills. The 100 bottles they put up in November are part of a plan to build a boutique agricultural business that will produce Geechee red peas, indigo, sour oranges and a variety of island garlic that is used for cooking and medicine.

Growing enough cane to make syrup hasn’t been easy. The effort to bring purple ribbon cane back to Sapelo Island started in 2014, when David Shields, a professor at the University of South Carolina and culinary historian, met with Cornelia Walker Bailey, the author and unofficial historian for the island, who died in 2017. It was her idea to create an agricultural business.

Armed with a new mission, Dr. Shields worked with Clemson University plant geneticists to develop a close match to the original purple ribbon cane that was first brought to Georgia from the West Indies in 1814. The cane was recently added to the Ark of Taste, a catalog of distinctive foods facing extinction maintained by the international organization Slow Food.

Before she died, Ms. Bailey passed the agricultural project to Maurice, one of her six children. “My mother always said do your part, so I’m just trying to do my part,” he said.

The cane project is essentially a one-man operation, with a lot of sweat and support from Nik Heynen, a geography professor at the University of Georgia, and a rotating band of volunteers. Growing the cane, cutting it and figuring out how to make cane syrup has made the two men as close as brothers. Dr. Heynen is so devoted to the project that he had an image of one of the island’s wild bulls tattooed on his arm after he saw one while driving across the island with Ms. Bailey.

The first planting was a stand of cane only 125 feet long. Each year they’ve grown a little more. In 2017, just as they were getting the hang of things, Hurricane Irma nearly destroyed the crop. Last month, they harvested almost five acres, of both purple and white cane.

The purple cane is the real prize. Some say its flavor is more intense and complex, and done right the syrup has a lovely magenta tint. A small company with family connections to the island already sells something it calls Sapelo Purple Ribbon Sugar Cane Syrup ($95 for about 24 ounces). The company worked with Maurice’s mother to get the project off the ground, but Mr. Bailey says its product is not true Sapelo Island syrup because the cane was grown off the island. It’s a sore spot for him.

Mr. Bailey had hoped to make syrup on the island this year, but the pandemic made it difficult to finish the sugar shack. So the two men piled the cane into a dumpster, put it on the ferry and headed to a relative’s farm on the mainland.

The family hadn’t made syrup for a few years, and were happy to clean the equipment and give Mr. Bailey and Dr. Heynen a lesson in grinding cane and making syrup. By the end of the weekend, they had filled about 70 25-ounce bottles, which they plan to sell for $89 apiece.

Making syrup is a long, slow process. Ten gallons of starchy cane juice will boil down into about a gallon of syrup. The men strained the juice into a big plastic garbage can, then poured it into the kettle and heated it to a simmer. For hours, everyone took turns skimming scum from the surface. When the syrup was close to being finished, they dumped in baking soda to make it “jump,” or boil up over the rim and purge the last impurities.

In the old days, syrup makers would pour some onto a dinner plate and watch the way it dripped to determine whether it was done. (Just a few minutes too long, and it can turn into sticky candy.) Dr. Heynen used a hydrometer, which is more reliable. “The real test,” Mr. Bailey said, “is when you pull that biscuit or that cornbread through it. It’s got to stick to the bread, but not break the bread.”