Richard Bacon reveals he ‘nearly died’ of mystery ‘double chest infection’ as former Blue Peter host, 42, breaks his silence after waking from a coma to joke he ‘overslept for six days’

Richard Bacon has broken his silence this morning after waking from a medically induced coma to reveal he ‘nearly died’ from a mystery lung condition.

The stricken posted a message on social media from his hospital bed where he said he thought ‘this is it’ when he was rushed into intensive care with a ‘needle jammed in my chest.’

He revealed he is suffering from a ‘yet unidentified double chest infection’ and told how he was in a coma for six days, and has spent the last four days recovering.

The former Blue Peter host also paid tribute to the health service saying: ‘I didn’t die because I’m on the NHS.’ 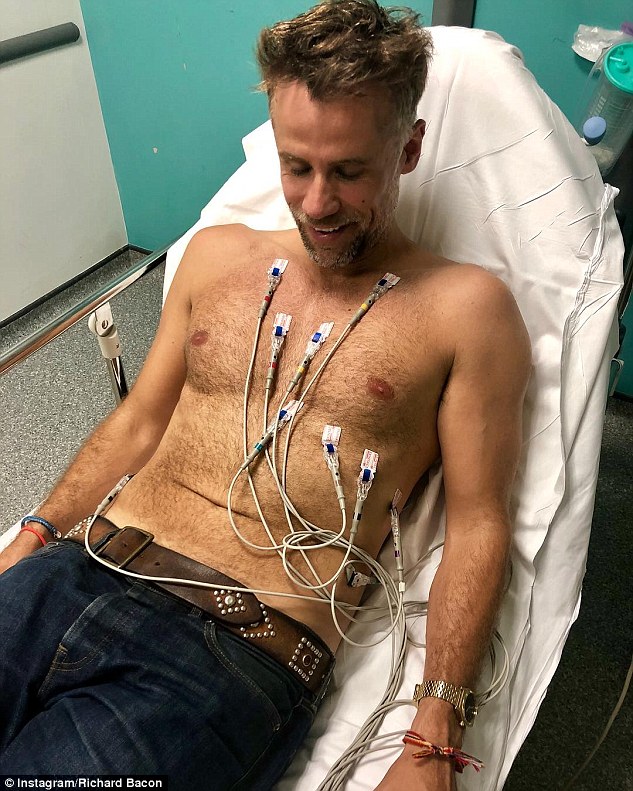 Mr Bacon, who posted this image when he was first admitted to hospital, has now come out of his medically induced coma and posted a message on twitter this morning

Mr Bacon also shared a quote with his fans where he talked about the ‘meaning of love’ as he was inundated with messages of support.

Match of the Day host Gary Lineker also asked him if he had ‘overslept’ and the former Blue Peter presenter replied: ‘Yes, for six days straight.’

Mr Bacon posted on Twitter this morning: ‘So I did 6 days straight in a coma. Been here another 4 since.

‘It’s an yet unidentified double chest infection. I nearly died. 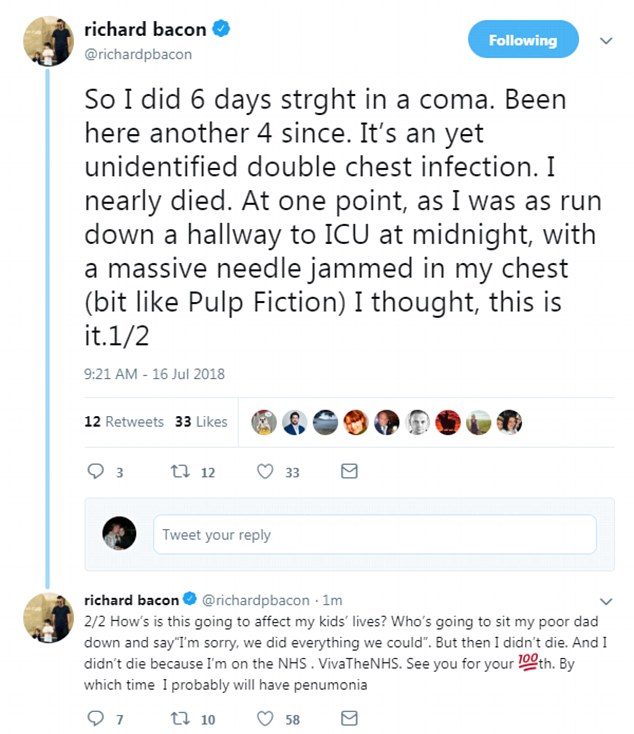 ‘At one point, as I was as run down a hallway to ICU at midnight, with a massive needle jammed in my chest (bit like Pulp Fiction) I thought, this is it.’

He added: ‘How’s is this going to affect my kids’ lives? Who’s going to sit my poor dad down and say’I’m sorry, we did everything we could’. But then I didn’t die.

‘And I didn’t die because I’m on the NHS. VivaTheNHS. See you for your 100th. By which time I probably will have penumonia.’

He later posted: ‘This is how good Lewisham Hospital is. I walked in off the street simply complaining of being short of breath. 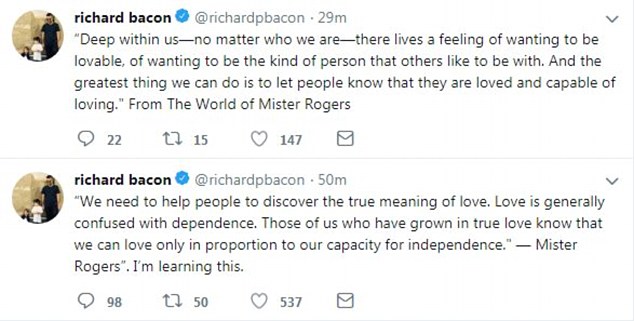 ‘With 90 minutes they had placed me into a life saving six day coma.’

Earlier he posted a quote from US TV star Fred Rogers, which said: ‘We need to help people to discover the true meaning of love. Love is generally confused with dependence.

‘Those of us who have grown in true love know that we can love only in proportion to our capacity for independence.’

He added: ‘I’m learning this.’ 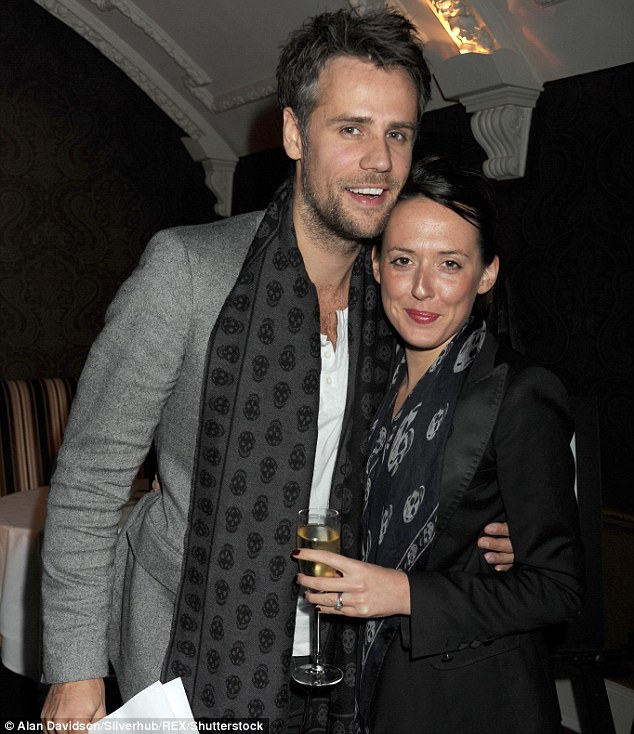 ‘And the greatest thing we can do is to let people know that they are loved and capable of loving.’ From The World of Mister Rogers’

Another said: ‘I’ve never been so glad to see someone’s name on my timeline as I have yours. So good to see you! Take it easy and do as you are told to get fully recovered xx’ 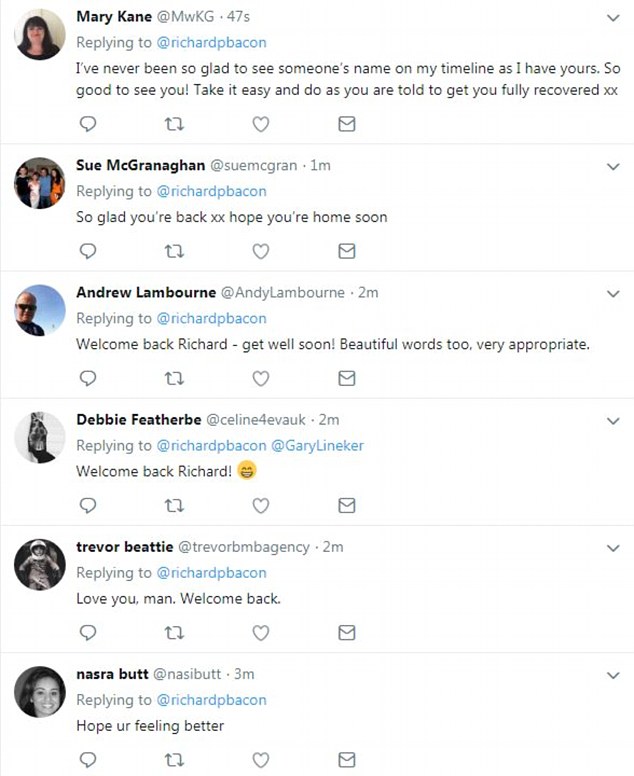 Mr Bacon became unwell on a flight from the US, where he now lives, back to the UK on July 5 and was rushed to Lewisham A&E in south east London.

The 42-year-old TV star, was diagnosed with pneumonia on both lungs, a potentially dangerous inflammation which can be caused by a virus or bacteria.

He became so unwell he was put into a medically induced coma, and finally woke on Friday.

His mother Christine told the Mansfield Chad: ‘He was having a lot of oxygen ventilation, a lot more than a normal person would need, through a pipe, as well as lot of antibiotics. 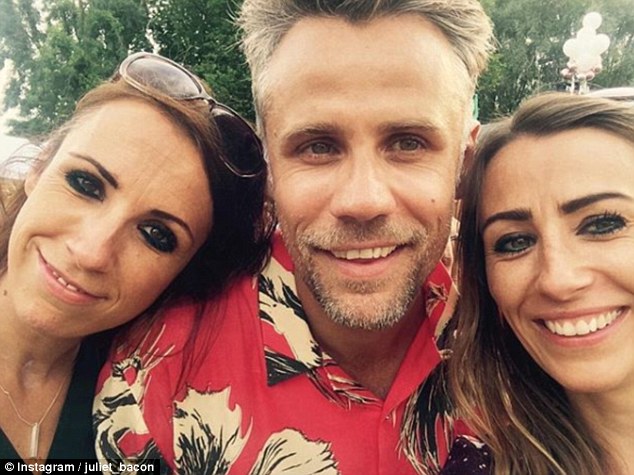 ‘They kept him like that for a week and we hadn’t left his side, at one point we really felt we might lose him.

‘It was such a relief when he opened his eyes, although he’s not responding to us very well yet we can see that he is getting better.’

She also tweeted thanking people for their support, saying: ‘As many people know, my son Richard Bacon has been in a medically induced coma in intensive care for a week but he’s young, he’s fit and the NHS have been brilliant, and I’m sure he’ll come through this.

‘Been very worrying. We’ve received so many lovely messages.’ 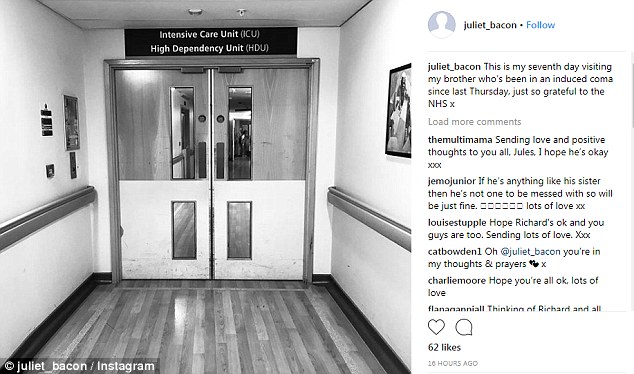 Juliet Bacon wrote on Thursday: ‘This is my seventh day visiting my brother who’s been in an induced coma since last Thursday, just so grateful to the NHS x’ 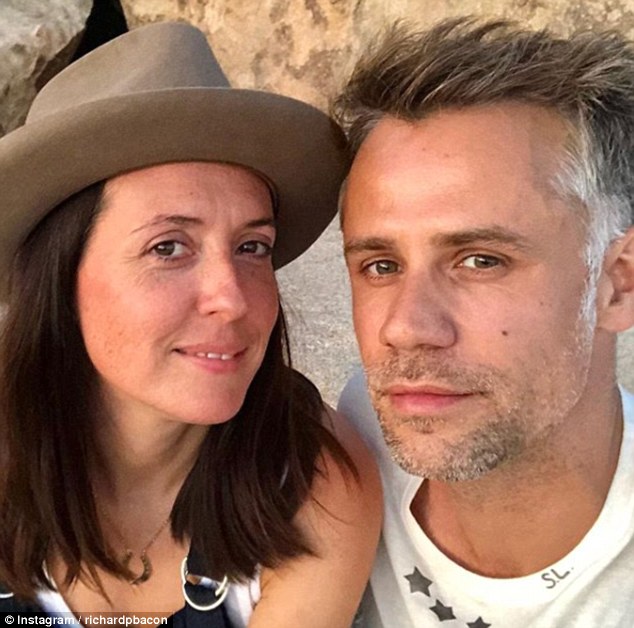 Mr Bacon has been married to Rebecca McFarlane since 2008, and the couple have a son Arthur, six and daughter Ivy, three

Speaking to MailOnline, Bacon’s father Paul said last week: ‘We are all at his bedside daily and we have all been very worried about him. He’s a strong young man and we expect him to come through this.

‘We are incredibly grateful for the concern people have shown. We have had messages of support from all over the world and we appreciate the hospital staff who are doing their very best for him.

‘The messages, emails and texts we have received have been an incredible support.’

Richard Bacon’s sister Juliet last week revealed that the TV presenter had been in a medically induced coma for a week. 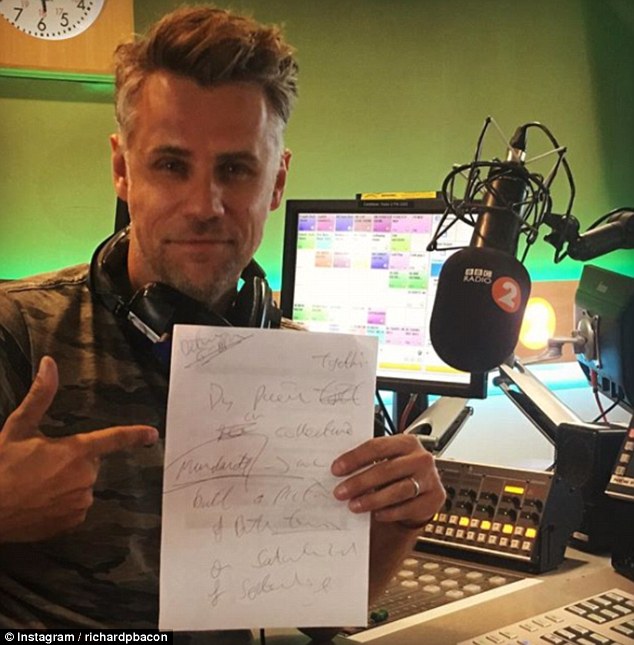 Mr Bacon wrote on Twitter last week: ‘Thank God I got ill in Britain (actually on the way to Britain, was taken off the plane in a wheelchair)

Juliet Bacon wrote on Instagram on Thursday: ‘This is my seventh day visiting my brother who’s been in an induced coma since last Thursday, just so grateful to the NHS x’

It comes as it emerged Mr Bacon reportedly quit his job in the US after wanting his young family to be near their relatives in the UK.

He is believed to have secretly walked away from his hosting duties at Fox in LA, after moving to America with his wife Rebecca McFarlane and their children three years ago.

Bacon, who has Arthur, six, and Ivy, four, with his wife, had job offers in the UK and was planning to go in for talks before he was rushed to hospital, The Sun reports. 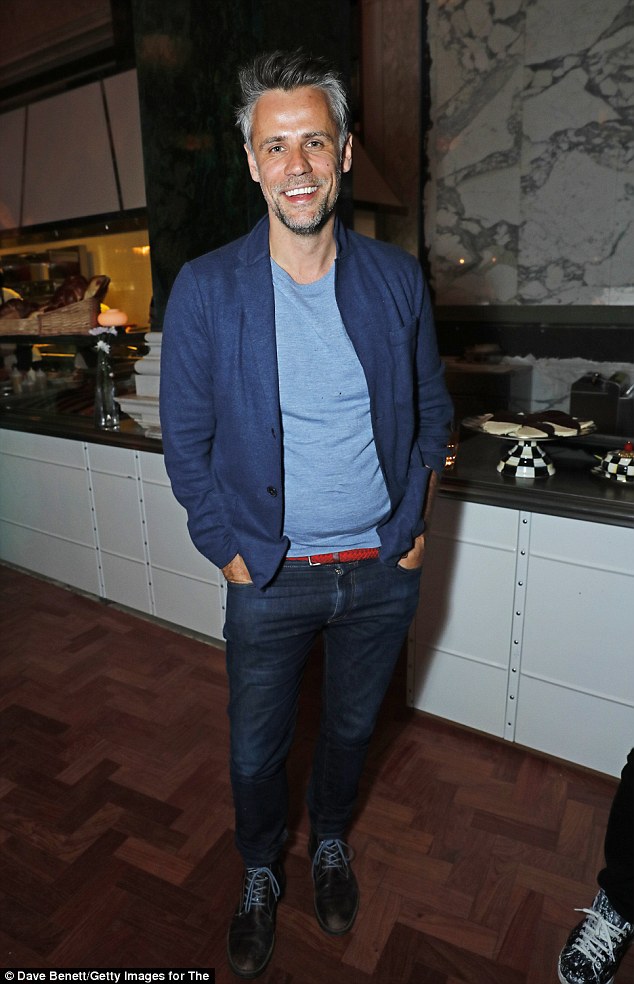 The former Blue Peter presenter  (pictured in London, April 2017) is now recovering in hospital after his ordeal

A source told the Sun: ‘Richard was excited about returning so his kids could see their grandparents more often and be less isolated.

‘He’s in demand, with a variety of job offers on the table. There were also meetings set up about radio and TV work in London.’

Celebrities took to Twitter to pen their support for the star, including Keith Lemon, presenter Toby Antis and comedy act Dick and Dom when it emerged he was in a coma.

Jeremy Vine wrote: ‘Thinking of my friend Richard Bacon and his family at this frightening time.’

Also sending his support was Lineker, who wrote on Richard’s last Instagram – where he was lying on a hospital bed – ‘hope you’re ok fella.’ 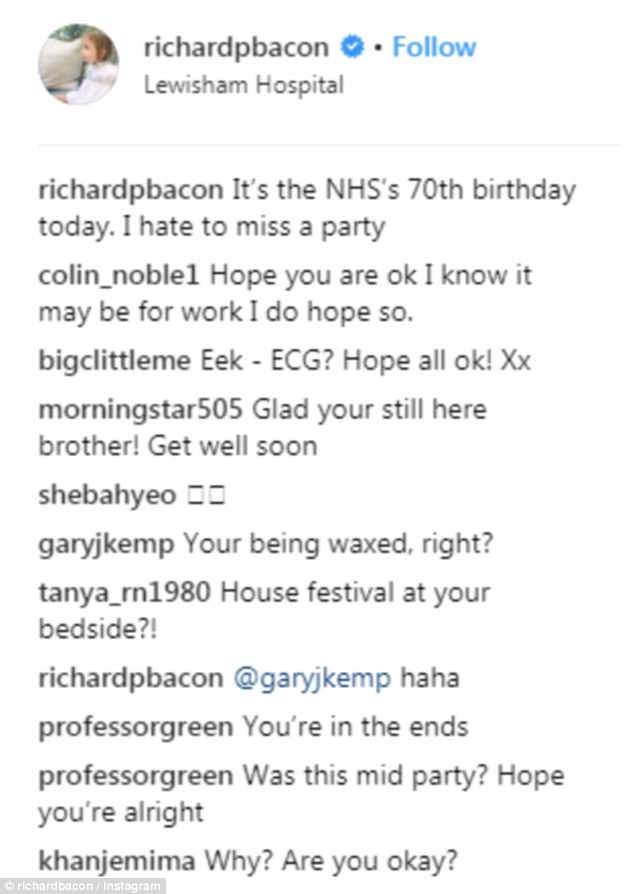 Jemima Khan was one of a number of celebrity friend to show concern after he posted on image on Instragram, showing him in hospital with wires attached to his chest

The ex-presenter was last seen in the picture posted nearly two weeks ago with nine wires strapped to his chest as he lay in bed at Lewisham Hospital in south-east London.

He wrote on Instagram: ‘It’s the NHS’s 70th birthday today. I hate to miss a party’.

Jemima Khan also enquired as to his well-being, saying ‘Why are you okay?’, while Professor Green penned ‘was this mid party? Hope you’re alright’.

Actor Will Kemp also joked: ‘Your being waxed, right?’, to which Richard replied ‘haha’.

Richard informed his fans at the time: ‘Looks like l’ve got pneumonia. Although I thought that was for people in their 80s.’

The radio personality tried to make light when he joked he was glad he got ill in the UK where he can be cared for by the NHS.

He wrote on Twitter: ‘Thank God I got ill in Britain (actually on the way to Britain, was taken off the plane in a wheelchair).

But later it emerged he has been placed in a medically induced coma as his condition quickly deteriorated.

Earlier this year Bacon revealed how he was diagnosed with Attention Deficit Hyperactivity Disorder (ADHD) at age 42.

In a candid interview with The Sun, the Fox presenter admitted his behaviour had spun out of control in the run-up to his diagnosis, saying he had been going out late drinking too much, as well as losing his credit cards ‘twice a week’, and other personal items.

The father-of-two, who said it was a ‘relief’ to be finally be diagnosed, admitted he was causing ‘pain and chaos’ to his family, and was tired all the time.

Concerned by his behaviour, the star saw a specialist, and after a brain scan, found out he had two types of ADHD and was put on medication.

He said the treatment has allowed him to sleep and cut down his drinking to twice a week and in significantly lesser amounts.

Richard, who has been married to Rebecca McFarlane since 2008, said now he feels he can finally change and be a ‘good husband and father.’