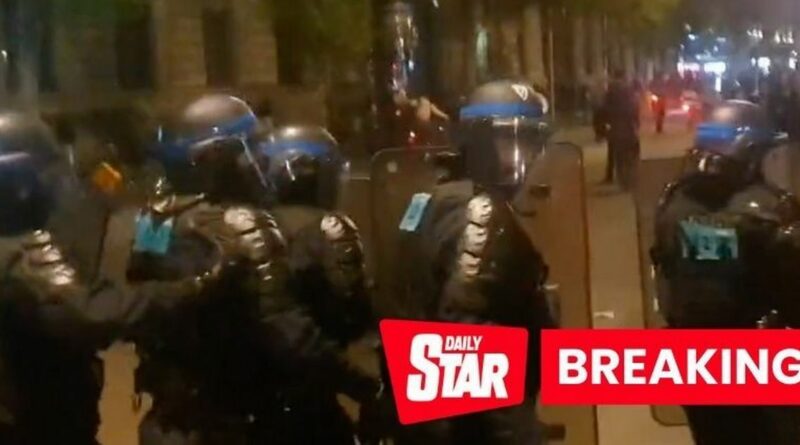 A video appears to show police dramatically charging at protestors as riots break out in response to the Macron election in Paris.

Dozens of campaigners can be seen running away from the scene as police respond to the aftermath of the results of the 2022 French presidential election at Place de la Republique.

It comes after it was announced that Emmanuel Macron defeated his far right challenger Marine Le Pen and won a second term as French president.

French journalist Simon Louvet uploaded the video on Twitter and said there was "strong tensions" between the police and campaigners.

He said: "Police charge, several demonstrators on the ground. The group is driven back to the middle of the Place de la République, locked on all sides. No strategy on the protest side."

The journalist added that some protestors are trying to evade the police by moving the demonstration elsewhere.

Simon added: "Some protesters are trying to launch a metro departure to make a wild demonstration elsewhere and avoid the police force of the Place de la République. Some say it's useless. Floating again."

In the shocking video online, police can be seen in riot gear as they take on protestors this evening ( Saturday, April 24 ).

Hundreds of people can be seen holding plaques about the election results which said "disgust with Macron."

Boris Johnson earlier congratulated Macron for his win and said on Twitter: “Congratulations to Emmanuel Macron on your re-election as president of France.

“France is one of our closest and most important allies.

“I look forward to continuing to work together on the issues which matter most to our two countries and to the world.”

This is a breaking news story and is being constantly updated. Please refresh the page regularly with the latest news, pictures and videos.

You can also get email updates on the day’s biggest stories straight to your inbox by signing up for our newsletters .

Get all the very best headlines, pictures, opinion and video on the stories that matter to you by following Daily Star every time you see our name.

Keep up-to-date with your must-see news, features, videos and pictures throughout the day by following us on Facebook at facebook.com/thedailystar