Home » Rise of the tradies: Record numbers sign up as apprentices 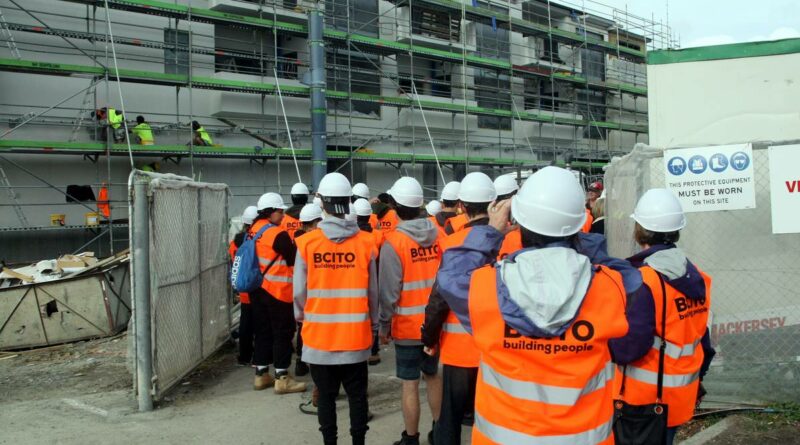 More school leavers are training to become builders, electricians and plumbers:apprenticeships in traditional trades have nearly doubled in the past year.

Data from the Ministry of Education shows the number of new apprentices under the age of 18 jumped from 460 in the six months from August 2019 to 810 for the same period in 2020.

Some students are also leaving earlier in Year 12, rather than the final year of school, to train on the job in their chosen field.

The increase is a step in the right direction according to training institutes BCITO and The Skills Organisation. Demand for skills tradespeople is high and a skills shortage expected in the coming years.

Burnside High School in Christchurch saw a jump in the number of Year 13 students pursuing apprenticeships from one student in 2019 to 14 in 2020.

Principal Phil Holstein said eight school leavers went on to apprenticeships in building or electrical and six went on to study building and construction Ara Institute of Canterbury.

There was also a spike in the number of Year 12 students who left to pursue the trades in 2020. Ten left school for the trades with two going into apprenticeships and eight leaving school to study building and construction at Ara.

Holstein said there was a growing acceptance of an apprenticeship pathway as a choice for education, employment, and future opportunities.

When he joined the school five years ago a student leaving in Year 12 to become an apprentice was considered “dropping out”. Those leaving for an apprenticeship in Year 13 were seen as “having a gap year”.

“Now, students are proud to announce that they have work, or they have an apprenticeship.”

The school offered a Dual Enrolment programme which allowed senior students to split their time between school and a trade-specific tertiary provider.

These students typically sign up for an apprenticeship on completion of their DE.

At St Peter’s College in Auckland, the number of Year 12 boys leaving school to go into skilled trades has doubled from four to eight since 2019.

Government incentives such as Apprenticeship Boost, which gave financial assistance to employers, had helped boost numbers.

“Apprentice Boost has opened the door and also parents are eager for their sons and daughters to have stability in their career path.”

“They want them to take the opportunity now because in 12 months’ time it might not be there.”

Bentley said ideally students would stay until the end of Year 13 because of the added academic and social benefits to finishing school.

“We like to teach the students about giving back to the school community which they do in their final year but that being said we don’t want to stand in the way if someone is presented with a fantastic opportunity.”

“If there is a great option with an apprenticeship in the trades then we say go for it.”

“For some of these young men and women, they end up fully qualified at 20-21 years of age with no student debt.

“They have the rest of their working lives ahead of them which puts them in a pretty amazing position.”

Schools nationwide reported the same pattern with most seeing at least a doubling in the number leaving for apprenticeships.

Mt Albert Grammar principal Patrick Drumm said there had been a steady increase in school leavers pursuing a trade. Last year there were 31, up from 12 three years earlier.

“We encourage them to stay until the end of year 13 but if a door opens for them and it is the right opportunity then they are encouraged,” Drumm said.

The school works closely with parents and any future employer to ensure the circumstances are beneficial.

The school also offers the Trades Academy programme, working with nearby Unitec.

“It gives the students a taste of the industry while still having the security of school and being in a uniform a few days a week.”

Data from the Ministry of Education shows a significant increase in apprentices of all ages from 2019 to 2020.

Building was the biggest growth industry with 2790 new apprenticeships between August 2019 and February 2020, and 7,315 for the same period after the introduction of Apprenticeship Boost.

Katrina Sutich from the Ministry of Education said the total number of apprentices who started training after the introduction of Apprenticeship Boost in August was 16,510 – up from 7,980 before the programme kicked in.

“The main goal of Apprenticeship Boost is to keep existing first and second-year apprentices in their jobs and in training,” she said.

Minister of Education Chris Hipkins said the Government’s Apprenticeship Boost was paying off.

“The Government has backed the trades with more than $320 million invested in free trades training (TTAF), and nearly $100 million going to support employers retain apprentices and take on new ones through Apprenticeship Boost,” Hipkins said.

“That investment has paid off with double-digit growth in apprentice numbers during 2020, despite the impacts of Covid-19.”

Large training institutes such as BCITO and The Skills Organisation said the growth had been staggering.

The Skills Organisation has seen a leap in the number of apprenticeships with a 149 percent increase.

Garry Fissenden of Skills said despite the increase in the number of school leavers seeking apprenticeships the training institute had seen a lift in the average age of students.

“What we are seeing is actually a slight increase in the average age of people entering trade apprenticeships,” Fissenden said.

“We’d put this down to the Covid effect – where people have needed to find a new career and, thanks to the Government’s Apprentice Boost and TTAF funds, taken up an apprenticeship.”

Fissenden said Apprenticeship Boost meant firms that hadn’t hired before or hadn’t taken on an apprentice for a long time were suddenly able to.

“That has both lifted the number of apprentices overall and, at the same time, lifted the average age of those taking up a trade.”

BCITO Chief Executive, Toby Beaglehole said there was a variety of factors in the growth of apprenticeships.

The organisation had a record 18,000 apprentices in training with an average age of 27.5 years.

“Public perceptions are changing and trade careers are gaining in popularity for career seekers and career changers alike,” he said.

“The combination of more work being available, and the Government’s support for apprenticeship costs, have directly driven more people into the trades and are encouraging more employers to train.”

Despite the record number of people in building apprenticeships, Beaglehole said more was needed to meet the skills demand in years to come.

“Although we are seeing a positive shift, there is still more work to be done. Many more people are needed to start formal training now if we are to match New Zealand’s demand.”