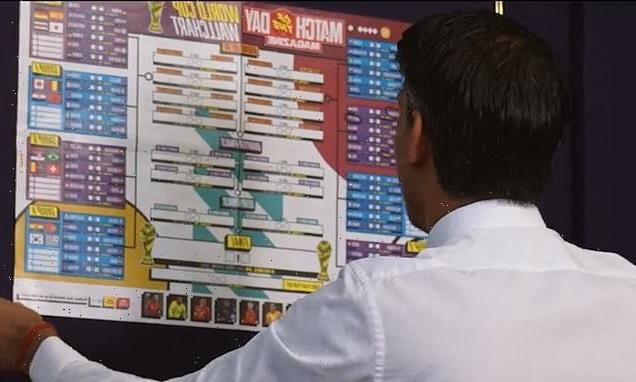 ‘Why is he drawing circles?’ Rishi Sunak is mocked after posting ‘cringe-worthy’ video of him putting up World Cup wallchart on his office wall with caption ‘do us proud’

Rishi Sunak has been mocked over a ‘cringeworthy’ video in which he has urged England and Wales to ‘do us proud’ while sticking a World Cup wallchart on the wall of his office.

The Prime Minister is seen opening a red box before circling key dates with a black marker – including those of England and Wales games.

With an admiring look on his face, Mr Sunak then sticks the poster on the back of his office door.

The video finishes with a simple message to the players: ‘Good luck England and Wales.’

The two countries have been drawn in the same group and will play each other on November 29.

But Mr Sunak has been mocked by social media users over the video, with some claiming he has ‘never filled in a World Cup wallchart before’.

One said’: How have you managed to do a World Cup wallchart wrong? What are you circling?’

Another added: ‘This man has never filled in a World Cup wallchart or collected Panini stickers in his life. Ever.’

A third said: ‘Please stop trying to be an ordinary ‘man of the people’ – you’re fooling no one with your cringeworthy cosplaying efforts.’

Qatar, meanwhile, have opened the tournament with a match against Ecuador today.

Rishi Sunak circles key dates on his World Cup wallchart, including the date of the England v Wales match

With a content look on his face, Mr Sunak then sticks the poster on the back of his office door

It comes after the opening ceremony was fronted by Hollywood actor Morgan Freeman.

Freeman narrated the opening segment of the ceremony, titled ‘The Calling’, telling viewers: ‘We all gather here in one big tribe’.

Empty seats could be seen within the Al Bayt Stadium during the ceremony, which featured scenes including ‘Leta’Arafo (To Know One Another)’, followed by ‘Chants of Nations’, a World Cup Medley, a showcase of the official mascots and Jung Kook of South Korean boy band BTS.

It comes as Qatar’s $200billion World Cup stadiums are eerily quiet, lacking in atmosphere and have been battered by sandstorms.

The eight stadiums have been plonked in stark surroundings with acres of desert around them which officials have tried to conceal with purple boarding carrying World Cup motifs.

But as sandstorms blew around the grounds today into the faces of migrant workers as they provided finishing touches, there was little sign of the usual fanfare of other World Cups when fans gather noisily in central locations or visit stadiums to take pictures.

Mr Sunak has urged England and Wales to ‘do us proud’ in the new video, which was posted om his Twitter account

Outside the Khalifa stadium, where England open their World Cup campaign against Iran tomorrow, the only people visible were security guards and migrant workers doing some last minute preparations.

At the Education Stadium a fierce wind ripped through a long empty road surrounding as a handful of security staff milled around.

A lone cleaner was picking up rubbish outside the 974 Stadium as some security staff looked on.

Things were equally quiet in central Doha and on the city’s metro with little sign of the estimated one million football fans who are believed to be visiting the country for the tournament.

Fans have said they believe Qatar has deliberately given the grounds an eerie feel so as not to attract visitors on non-match days.

Meanwhile, it was revealed earlier this month that Mr Sunak is planning a show of solidarity with gay England fans travelling to the World Cup by sending the Government’s most senior gay minister to Qatar as part of the official party.

While the precise details of the Government delegation were still being finalised, Stuart Andrew is set to attend the tournament in his dual ministerial role as Sports Minister and Minister for Equalities.

He is likely to take a different approach to Qatar’s ban on homosexuality — with sanctions ranging from seven years in prison to the death penalty for Muslims who are prosecuted under Sharia law — to James Cleverly, who was strongly criticised last month for urging gay fans to show a ‘little bit of flex and compromise’ and to ‘respect the culture of your host nation’