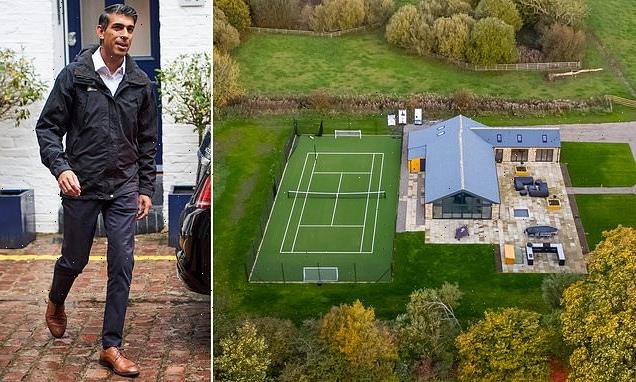 Riding a wave of support, Rishi? Ex-Chancellor’s swimming pool complex is almost complete at his manor house in Yorkshire as he leads way to be next Tory leader

Rishi Sunak’s lavish private swimming pool complex at his North Yorkshire manor house has been pictured nearing completion as he leads the race to become the next Prime Minister.

The former Chancellor of the Exchequer, who is facing competition from former Prime Minister Boris Johnson and Leader of the House of Commons Penny Mordaunt for the top job, has spent £400,000 on the new pool.

He has also built a gym and tennis courts at his £2million Georgian manor near Northallerton, with reports from earlier this year estimating he would have to pay £13,000-a-year to keep the new pool warm.

However, this figure may have risen dramatically over the last few months as energy prices have continued to surge, putting millions of people in the UK at risk of not being able to pay their bills.

That could soon be put to the test, with aerial photos showing the outside of the plush private complex has been completed, with a tennis court that appears to double up as a football pitch, with nets at either end, in place.

The photos were taken the same day that Sunak ploughed into the lead amid the race to replace outgoing Prime Minister Liz Truss, with 128 MPs giving him their backing in just a couple of days.

Mr Sunak, who fell at the final hurdle during the Conservative leadership contest in August and September, where he lost out to Ms Truss, will be looking to avoid another repeat.

However, peace talks between him and Mr Johnson failed to conclude in a deal between the pair, raising the prospect that the former Chancellor comes up against the former Prime Minister in the final round. 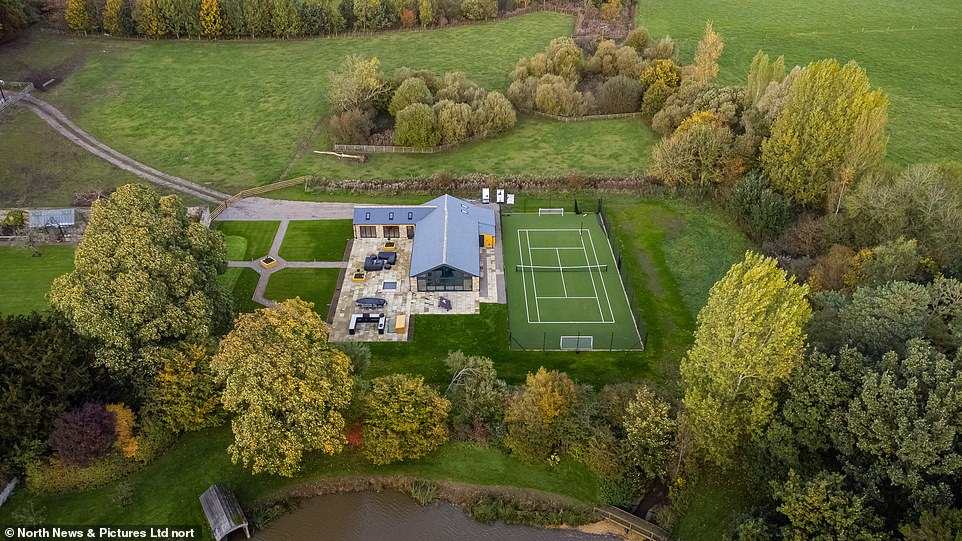 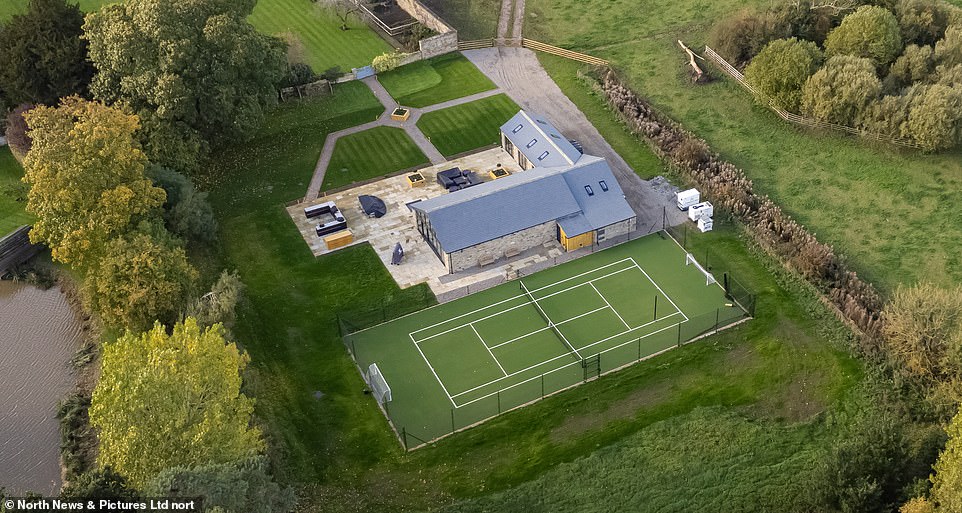 The complex, which has an indoor swimming pool and gym, as well as a tennis court that doubles up as a football pitch, has been under construction for months 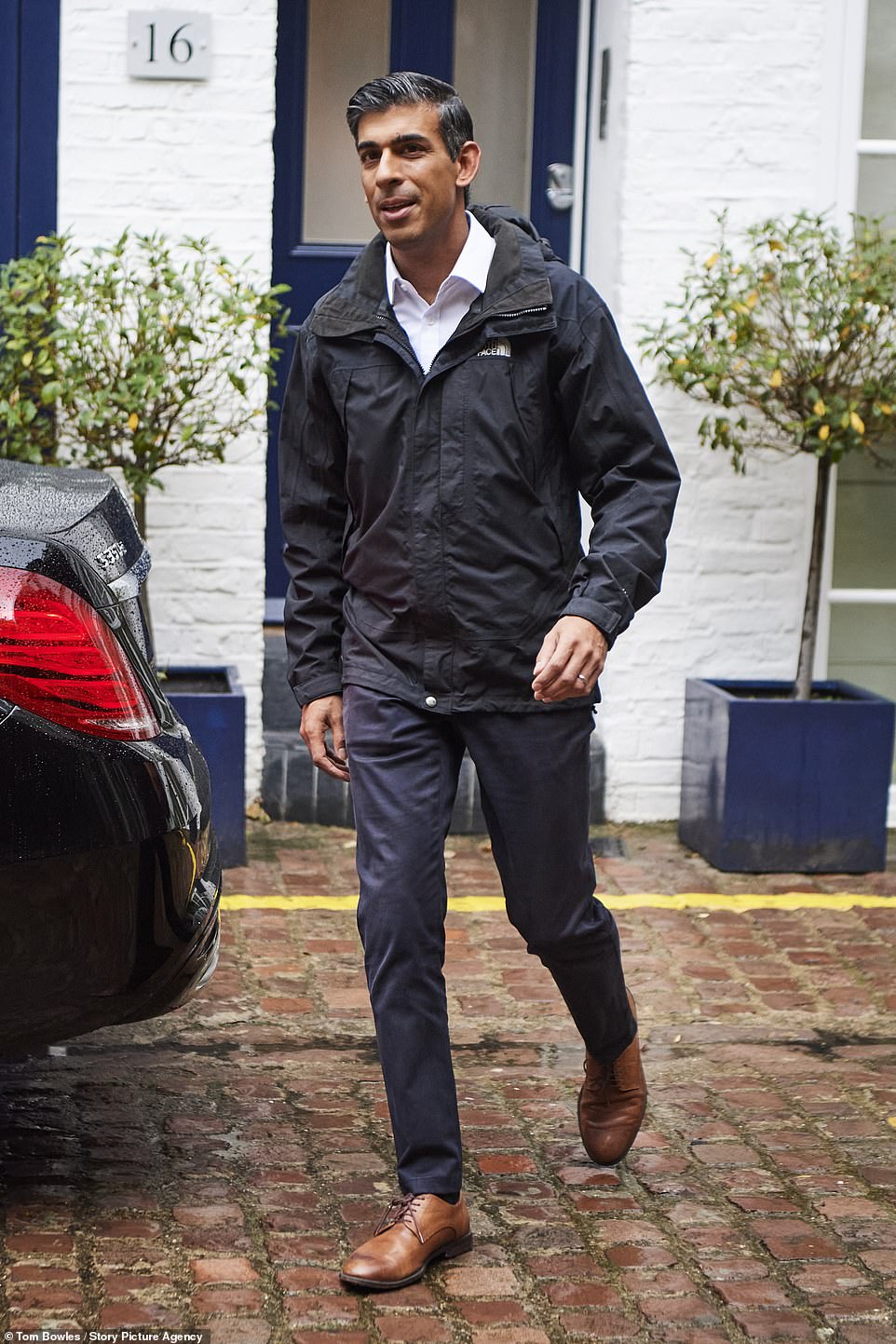 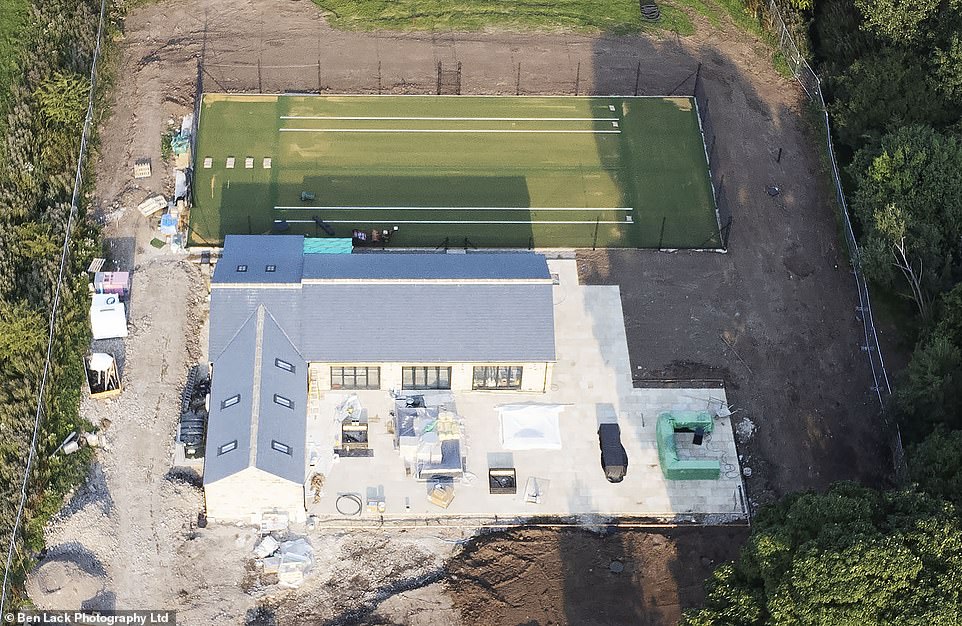 No tax payer money is thought to have been used in building the complex (pictured here in August) , and there were no objections from people living nearby before it was approved by the local council last year 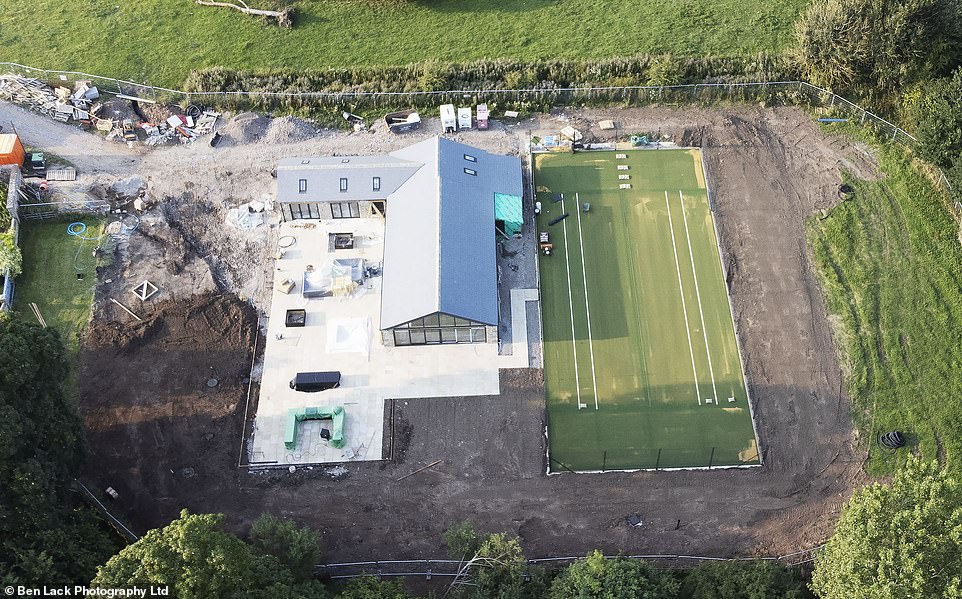 A gym, tennis court and swimming pool complex at Rishi Sunak’s North Yorkshire manor house has taken shape after months of construction. Here the complex is pictured in August

The swimming pool at his Grade-II listed manor house, where he typically spends his weekends with his wife and two daughters, has been under construction for several months.

The 42-year-old applied to the local council to build an L-shaped pool house, which will include a hot tub, utility and changing area and plant room, in June last year.

These plans, which included a 12-metre by five-metre swimming pool, were later approved by the council.

No tax payer money is thought to have been used in building the complex, and there were no objections from people living nearby.

Reports it would cost £13,000-a-year to heat did not go down well among members of his constituency, especially after the sharp rise in energy bills.

He has previously come under fire for the construction of the leisure centre at a time of financial hardship for his constituents –  public leisure facilities in Sunak’s constituency of Richmond are struggling with crippling energy bills amid the cost of living crisis.

Richmondshire Leisure Trust has announced it will end its management of Colburn Leisuire Centre as its utility bills are set to rise from £15K last year to around £72K this year.

Richmond Swimming Pool, which serves 2000 people a week, was also under threat, but the council have pledged support and funding to keep it open.

The former chancellor owns the Grade II manor house with his wife Akshata Murthy – the pair were included on The Sunday Times Rich List earlier this year which stated that the couple had a net worth of around £730m.

They also own a £5.5 million home in Santa Monica in California, where Mr Sunak has been tipped to live if he decides to quit politics in the UK.

Mr Sunak, who worked as an investment banker for firms California, India and Britain, including Goldman Sachs, is known to use the Yorkshire property when Parliament is not in session and he doesn’t need to be in London. 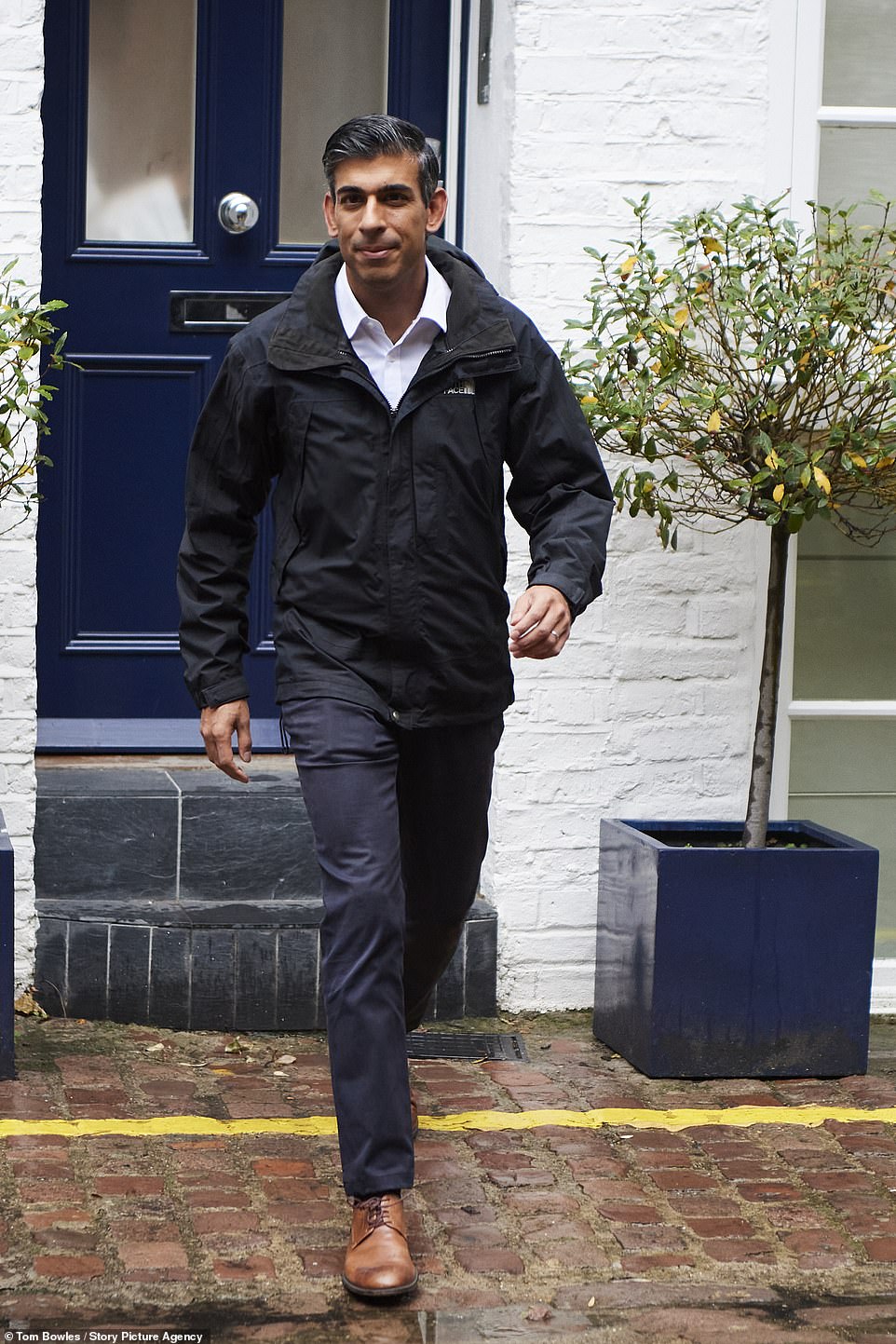 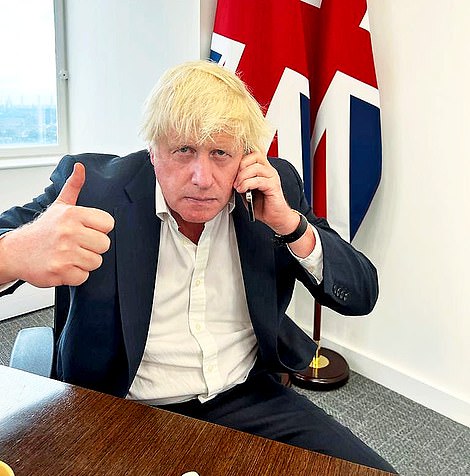 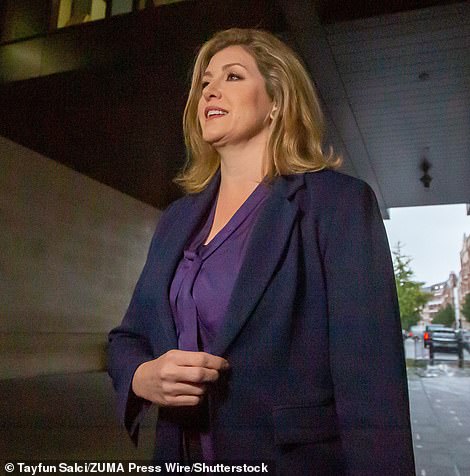 Earlier today Mr Sunak officially launched his campaign to replace Liz Truss as Prime Minister, less than two months after losing to her in the previous Tory leadership election.

The former chancellor held late-night talks with rival Boris Johnson were claimed to have ended without a power-sharing pact being struck.

He formally confirmed his candidacy for the Tory leadership as he vowed to ‘work day in and day out to get the job done’ as Britain faces a ‘profound economic crisis’.

He promised to lead a Government with ‘integrity, professionalism and accountability’ if he enters No10.

Mr Johnson and Mr Sunak met at 8pm last night where the ex-PM was said to have told his former Chancellor that – if he re-entered No10 with Mr Sunak in a senior role – it would avoid a divisive battle.

But it was claimed this morning that no agreement was struck between the pair in their three-hour negotiations.

It sets up another 24 hours of frantic phone calls and messaging between leadership contenders and Tory MPs ahead of tomorrow’s 2pm deadline for them to secure the backing of 100 supporters.

Penny Mordaunt, who officially declared her leadership bid on Friday, this morning denied ‘completely false’ claims she had offered to back Mr Johnson in return for a job.