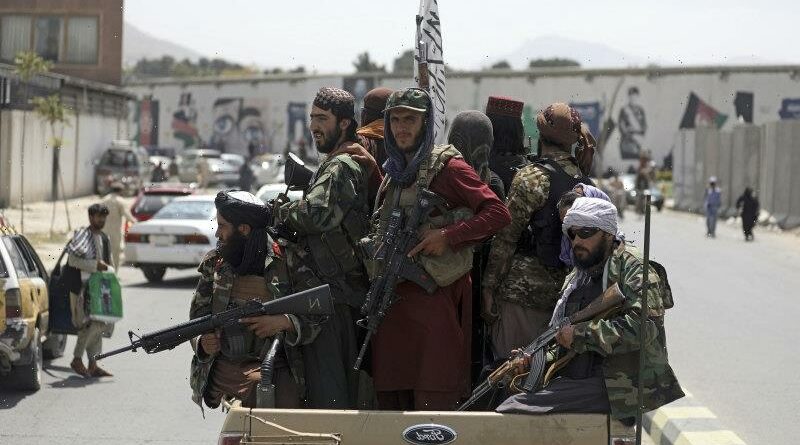 Beijing: In the US departure from Afghanistan, China has seen the realisation of long-held hopes for a reduction of the influence of a geopolitical rival in what it considers its backyard.

Yet, it is also deeply concerned that the very withdrawal could bring risk and instability to that backyard — Central Asia — and possibly even spill over their narrow, remote border into China itself and the heavily Muslim northwestern region of Xinjiang. 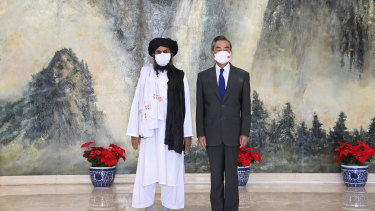 The Taliban’s takeover could certainly present political and economic opportunities for China, including developing Afghanistan’s vast mineral riches, and Beijing has said it is ready to help rebuild the impoverished nation. But stability will be required to reap most of those benefits, and the immediate result of the American withdrawal has been more instability, not less.

“I think Beijing will play up the narrative of American fecklessness and decline of Empire, painting this as evidence of why Beijing will be a better steward for the Eurasian heartland,” said Raffaello Pantucci, an expert on the region at the Royal United Services Institute in London.

“But in reality, I am not clear that I see that many huge upsides for Beijing at the moment.”

Like many nations, China is concerned about the risk of terrorism from a Taliban-led Afghanistan. Beijing has repeatedly told the Taliban that the country cannot become a breeding ground for militants to launch attacks in Xinjiang, much as Osama bin Laden used it as a base to prepare his September 11, 2001 attacks on the US. 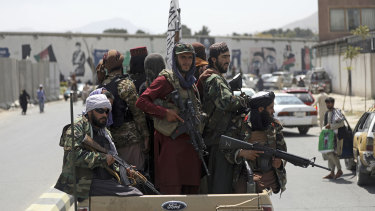 A more proximate threat may be the spillover of militancy into Pakistan and Central Asia, where China has invested heavily and sought to build alliances.

“The Afghan Taliban have promised that they will break from international terrorist forces, but we still haven’t seen how they will do this because they are not officially in power,” said Li Wei, an international security expert retired from the China Institute of Contemporary International Relations.

The Taliban could be an incongruent partner for China since their religion-based philosophy is diametrically opposed to Beijing’s vision of atheist rule under the Communist Party that puts social stability and economic development above all. That, however, has not prevented China’s ultimately pragmatic leaders from reaching out to them.

Chinese officials and state media have been critical of what they call America’s “hasty” retreat from Afghanistan. “Taliban’s rapid victory embarrasses US, smashes image, arrogance,” read a headline in the state-owned Global Times newspaper. 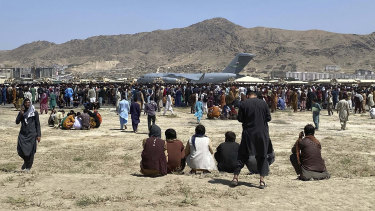 Hundreds of people gather near a US Air Force C-17 transport plane along the perimeter at the international airport in Kabul, Afghanistan. Credit:AP

Despite the rhetoric, Wang told US Secretary of State Antony Blinken that China was willing to work with the US to promote the “soft landing” of the Afghan issue.

However, he added that “the US cannot, on the one hand, deliberately curb and suppress China to damage China’s legitimate rights and interests, and on the other hand, count on China to offer support and coordination”.

President Joe Biden has said leaving Afghanistan will prepare America to deal with bigger potential threats, including from China.

“Our true strategic competitors — China and Russia — would love nothing more than the United States to continue to funnel billions of dollars and resources and attention into stabilising Afghanistan indefinitely,” he said this week.

Yin Gang, a researcher in Middle Eastern Studies at the Chinese Academy of Social Sciences, said the two countries share a common interest in a stable Afghanistan.

“If Afghanistan achieves stability, it will make the US look good and China will be invited to participate in reconstruction,” Yin said.

China has chased commercial ventures in Afghanistan, but the prospects of such projects reaching fruition appear no closer now than they were over the past 20 years of the US presence.

A consortium led by China Metallurgical Group Corporation bid $US3 billion ($4.2 billion) to develop what is one of the world’s largest copper deposits at Mes Aynak, promising also to build a power plant, railway and other infrastructure. Years later, work has yet to start, largely because of insurgent activity in surrounding Logar province. 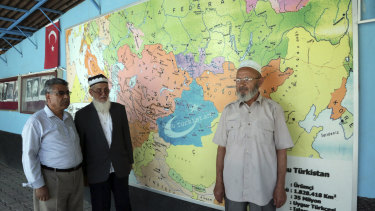 Uighur Muslim men stand in front of map showing the area claimed by Uighur separatists as “East Turkistan” marked in blue at a resettlement community in Kayseri in central Turkey. Credit:AP

China’s state-owned National Petroleum Corporation suspended oil drilling in the Amu Darya basin because of a delay in the signing of a transit agreement with Uzbekistan to allow crude oil to be trucked to China. The Afghan government later voided the drilling agreement.

China has invested heavily in Pakistan, which borders Afghanistan, in hopes of extending its Belt and Road Initiative to broaden China’s overseas reach by improving trade routes, but Afghanistan appears far from ready to serve as a link in that chain.

China’s extensive economic interests in Pakistan and Central Asia could clearly be impacted by any terrorist resurgence in Afghanistan, said Henry Storey, a political risk analyst based in Melbourne, Australia,

“At the same time, China is loath to get involved with any boots on the ground presence, as it does not want to repeat the mistakes of the US — or be distracted from more pressing issues like Taiwan,” Storey said, referring to the island China claims as its own and threatens to invade.

Chinese scholars echoed the government line that China will not insert itself into Afghanistan’s domestic affairs, regardless of how the situation develops. At a briefing this week, Foreign Ministry spokesperson Zhao Lijian said China would provide assistance to Afghanistan within its means.

While “hawkish” Chinese state media have portrayed events in Afghanistan as a win for Beijing and loss for Washington, that reflects “a false sense of confidence,” said Meia Nouwens, a China expert with the International Institute for Strategic Studies

China might not be as interested in exploiting the US withdrawal as an opportunity to engage economically with Afghanistan as some have suggested, she said, noting that Beijing has been slowing its foreign infrastructure investment.

The question of how to safeguard security of Chinese investment and personnel also looms large.

“For the moment … Beijing will do the same as most other countries,” she said. “Wait and see how things develop in Afghanistan.”