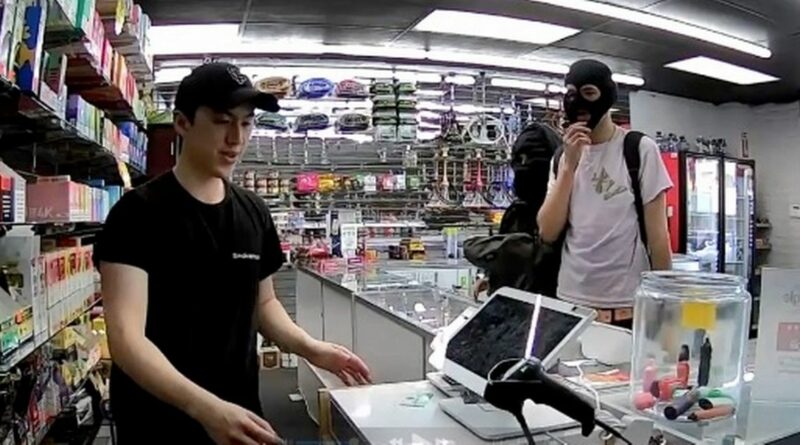 Video footage shows the moment owner of a vape shop was seen repeatedly stabbing a would-be robber who tried to steal a tip jar.

Johnny Nguyen, owner of Smokestrom Smoke Shop, Las Vegas was startled by two brazen thieves who attempted to rob his store in broad daylight on Wednesday (August 3) at around 3.25pm.

The 23-year-old said that he "feared for his life" when the two men wearing black ski masks entered his shop and attempted to take the tip jar.

READ MORE: Bloke caught stealing £60k worth of Pokemon cards as he tried to sell 'em all

He claims he asked the men nicely to leave before resorting to defending himself by grabbing a knife that was kept near the register and stabbing the unidentified assailant at least seven times.

Speaking to the New York Post, Nguyen said: "I was scared for my life. When they came in, one of them had a bag in front of him like he had a firearm or something.

“I asked them first nicely to leave but the guy took my tip jar, which was fine. When they came back and tried to take some more, that’s when it escalated.

"I didn’t have much time to think. I grabbed my knife right next to the register.”

Surveillance footage showed one of the suspects jumping over the counter and trying to grab some products off the shelf before the fearful shop owner grabbed the three-inch blade and stabbed him.

Nguyen added. “He said he was sorry. By that point, he took off his mask himself. I was trying to get on the phone with the police when he was trying to talk to me.

"I just ran and wanted to make sure the police and ambulance would get here on time.”

Nguyen, who is still in 'shock' over the incident, said police told him the robber was 17 years old. His condition was not clear.