Roberta Williams has pleaded not guilty to allegations she imprisoned, threatened and choked a video producer with an electrical cord.

The former wife of gangland killer Carl Williams was on Thursday committed to stand trial on charges of extortion, making threats to kill and unlawfully imprisoning Ryan Naumenko, a producer she was working with to create a reality television show about her life. 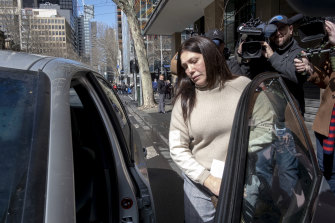 Police allege that on July 9 last year, Ms Williams and four men in their 20s told Mr Naumenko to meet them in Collingwood, where they locked the doors, repeatedly punched and kicked him and demanded money.

Mr Naumenko claims that Ms Williams yelled: "I'm the f—ing godmother, you f—wit" at one point during the alleged incident. 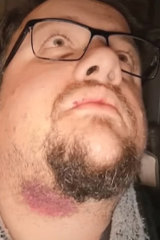 At the end of the second day of a three-day committal hearing in the Melbourne Magistrates Court, Ms Williams' lawyer, John Desmond, on Thursday applied to have his client committed to stand trial.

Magistrate Andrew McKenna said the evidence was of sufficient weight to support a conviction and committed her to stand trial in the County Court.

The trial is expected to go for a month.

Ms Williams, who appeared via video link in a pink top with her hair in a bun, was asked whether she was guilty or not guilty.

"Not guilty, your honour," she said.

Her bail was extended. As her bail conditions were discussed, Ms Williams became emotional as she pleaded with the magistrate not to state her address.

"I have a son with a disability, I do not want the media surrounding my house as they do on a daily basis, terrorising my daughter and children and myself. I'm unwell at the moment … I have a lot of medical issues, please."

The magistrate assured her that there were orders in place to prevent the media from publishing her address. She will next face court on December 10.

Under cross-examination on Thursday, Mr Naumenko said that to this day he continued to try to "block out" the incident, which he said increased his mental health problems, anxiety and stress.

He said he had wanted to make the television show with Ms Williams to advance his career, but that had gone "pear-shaped".

He said that after the alleged assault on July 9, he had messaged his cousin, Matthew Guy, the former leader of the Victorian Liberal Party, on Instagram.

Mr Naumenko said he recounted the alleged assault to Mr Guy, who told him to go to the authorities.

"He said, 'It's out of control' and advised me to go to the police," Mr Naumenko told the court.