Boris Johnson is today urged to sack Matt Hancock for presiding over a ‘shambolic’ corona-virus strategy which is destroying jobs but failing to stop the disease.

Sir Rocco Forte demands that the Health Secretary should pay with his job for championing misguided lockdown policies now driving the hospitality sector into bankruptcy.

In a scathing article for The Mail on Sunday, the hotel tycoon declares: ‘I believe it’s time to remove the figurehead [Mr Hancock] for the current shambolic handling of the crisis, with policies marked by indecision, U-turns and blindness to the devastating impact of its actions.’

He laments how the Government’s virus response is turning the UK into ‘a totalitarian state’, with Ministers encouraging people to spy on neighbours while pubs and restaurateurs are required to employ ‘Gestapo-like tactics’ with customers over curfew and virus rules.

And to illustrate the plight of the sector, Sir Rocco reveals how his own business will have to make redundant 80 of its 450 UK staff when the furlough scheme ends. 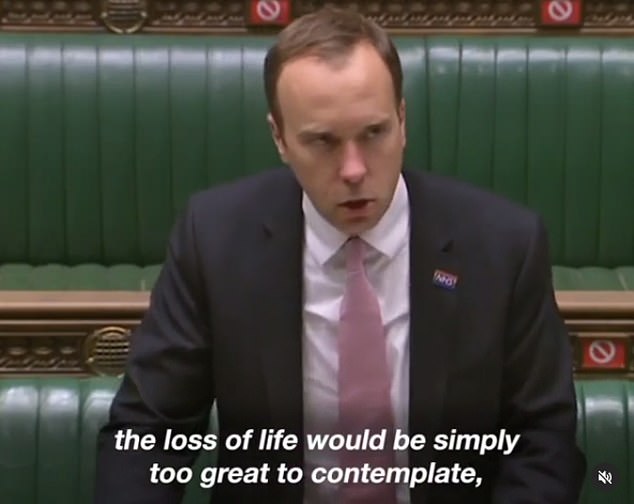 In a scathing article for The Mail on Sunday, the hotel tycoon declares: ‘I believe it’s time to remove the figurehead [Mr Hancock] for the current shambolic handling of the crisis’

The hotelier also takes aim at the Health Secretary for failing to respond to The Mail on Sunday’s repeated questions about whether he returned to the Commons Smoking Room bar where MPs breached the 10pm drinks curfew one evening earlier this month.

He writes: ‘The story has reinforced the infuriating impression that it’s one rule for them and one rule for the rest of us. It is time for Mr Hancock to go and for the Government to change tack and move to an approach that allows the economy to return to normal.’

His remarks come as a Deltapoll survey for The Mail on Sunday reveals that nearly half the country (49 per cent) believes the Health Secretary did breach the drinks curfew – with only nine per cent thinking he did not.

However, when ‘Don’t knows’ are excluded, the public verdict is even more damning, with 84 per cent believing he was drinking past 10pm, and only 16 per cent saying he was not.

Mr Hancock has refused 30 times to answer this paper’s question as to whether he returned to the Smoking Room after a 9.40pm vote on October 5 – despite a senior Tory MP insisting he saw him there drinking after the curfew. 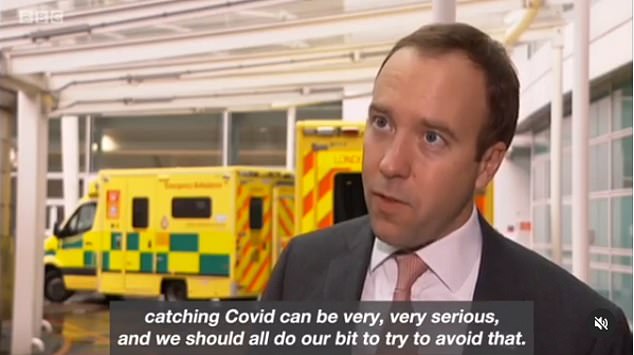 For over a week the Health Secretary stuck to a carefully worded statement that said ‘no rules have been broken’, adding that although he was in the bar that night, he had ‘departed the parliamentary estate to go home’ after the vote.

In the Commons last week, Mr Hancock appeared to go further, saying: ‘People are generally following the rules and, as I did, going home at 10pm.’ That sparked mockery from Speaker Sir Lindsay Hoyle, who quipped: ‘Can you tell The Mail on Sunday then?’

Quizzed on the subject again yesterday, the Health Secretary’s spokesman referred only to Mr Hancock’s original statement and his Commons remarks.

In response to Sir Rocco’s wider criticisms, the spokesman said: ‘The Health Secretary is focused on protecting lives and livelihoods. There would be greater, longer-lasting economic damage if we failed to take action to get this virus under control.’

Despite dealing with the pandemic, Mr Hancock has still found time to post a series of images of himself on Instagram.

The Deltapoll survey puts the Tories on 42 per cent, like last month, with Labour up a point to 39 per cent.

Co-founder Joe Twyman said the poll showed strong support for measures to tackle the second wave of the virus, but added: ‘There is deep concern about the impact these changes will have on the economy.’

We are gradually becoming a totalitarian state. Ministers are encouraging people to spy on their neighbours, the police are urged to abandon their normal duties to disturb us in the privacy of our homes, and pub and restaurant owners are required to use Gestapo-like tactics with their customers.

Millions are again prevented from meeting friends and family, banned from leading normal lives. Swathes of jobs are also being destroyed and Government debt is piling up to dizzying levels.

Yet it seems there is no logic behind any of this. 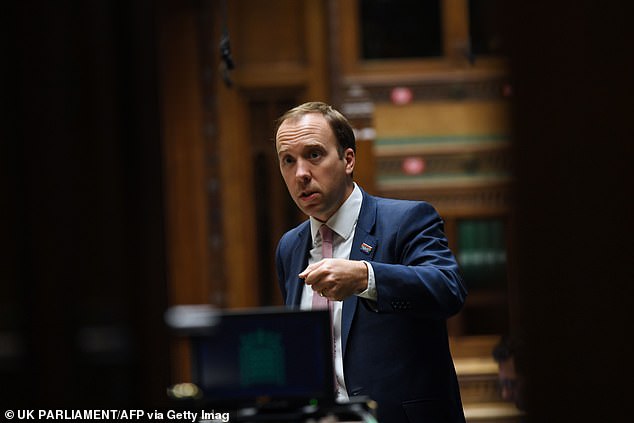 A handout photograph released by the UK Parliament shows Britain’s Health Secretary Matt Hancock attending a debate on the novel coronavirus COVID-19, in the House of Commons in London on October 22, 2020

We have reached a farcical situation where it appears to be perfectly acceptable to die of anything so long as it is not Covid.

About 1,500 people are dying every day, but all we hear about are the 100 or so who die after testing positive for Covid-19 in the previous 28 days.

Official figures show that last month coronavirus was only the 19th-biggest cause of death in England.

Deaths from cancer, heart attacks, strokes, pneumonia and influenza are all at high levels because people have been discouraged from seeking NHS treatment, or it has not been available.

This is a hidden scandal, involving thousands of deaths that could have been prevented. But the Government pays scant heed to any of this because its focus is purely on Covid.

I believe the reality is this: the virus is not the devastating killer it was thought to be at the outset. According to some of the latest research, the likelihood of dying if you catch Covid is as low as 0.25 per cent, while the deaths that sadly do occur are concentrated among over-75s and those with underlying health problems.

In the 2017-18 flu epidemic period there were 50,000 excess deaths – a similar number to Covid deaths since March – yet we did not shut Britain down. The current panic, therefore, is hugely misplaced.

In April, only those ill enough to have been hospitalised were being tested. Now a much wider spectrum is being screened, many of whom are asymptomatic or have very mild forms of the disease, meaning many more cases are being picked up. 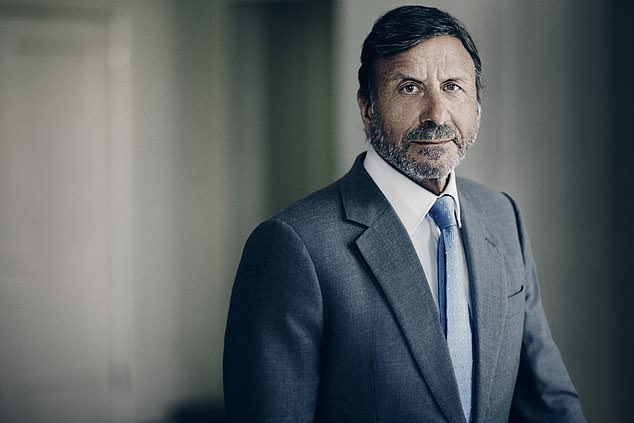 The latest evidence is that current infections are mainly in care homes (45 per cent of the total) than in the education sector (21 per cent). Food outlets and restaurants account for just five per cent of infections. So why is this industry being driven on to the rocks of bankruptcy again?

Business for restaurants and bars has been reduced to a trickle since the imposition of Tier 3 restrictions across the North and Tier 2 regulations in London, although it must be said that Chancellor Rishi Sunak’s announcement last week of further support is welcome.

It is quite clear from all of the evidence around the world that lockdowns do not stop the disease and only prolong its duration.

The World Health Organisation no longer recommends them as a way of dealing with the disease. Why, then, do Ministers persist with this flawed and divisive approach?

The duty of government should be to protect the old and the vulnerable – those most at risk of dying of Covid-19 – with a particular focus on care and health settings.

Lockdowns will succeed only in wrecking the economy and blighting the lives of many, and the young in particular.

Little or no thought has been given to the devastation all around us: the businesses that are failing, the jobs being destroyed and the suffering this will cause.

Opinion polls show that the public largely supports Government policy, an echo of Ministers’ own doom-laden propaganda. If current policies do not change, they will find the mood changing very rapidly. But by then it will be too late.

My industry is suffering with 25,000 restaurant pub and hotel premises forced to close. Half a million seasonal workers were unable to take up their jobs this summer and 162,000 people have already been made redundant.

Now we approach the end of the Government’s furlough scheme to support wages, after which the real bulk of redundancies will occur. A recent poll indicated that 37 per cent of UK hospitality business owners are considering closure. 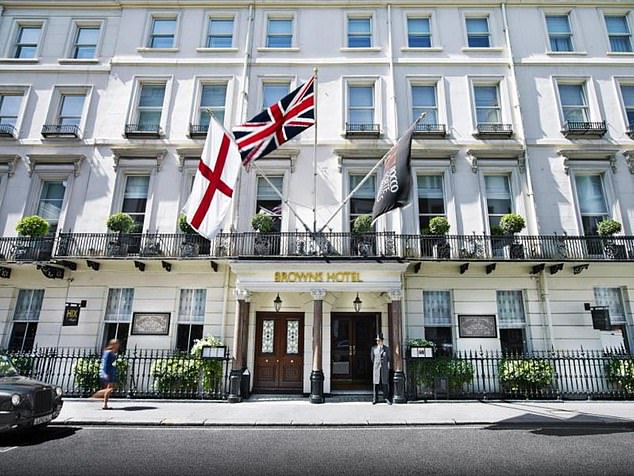 My own business will be forced to make 80 people redundant out of a total staff in the UK of 450 when furlough ends. Pictured: Browns Hotel, one of Rocco Forte’s city centre hotels

My two city-centre hotels in this country are languishing on occupancy rates of 20 per cent and this is unlikely to change until international travel returns to something approaching normal.

This is a disastrous and unnecessary state of affairs.

The fact is that I believe it’s time to remove the figurehead for the current shambolic handling of the crisis, with policies marked by indecision, U-turns and blindness to the devastating impact of its actions.

I exclude from any blame NHS frontline staff, who have been heroes – but heroes, unfortunately, led by donkeys.

Incidentally, Mr Hancock has repeatedly refused to answer questions from this newspaper over whether he returned to a Commons bar where MPs were drinking beyond the 10pm curfew.

It is time for Mr Hancock to go and for the Government to change tack and move to an approach that allows the economy to return to normal.