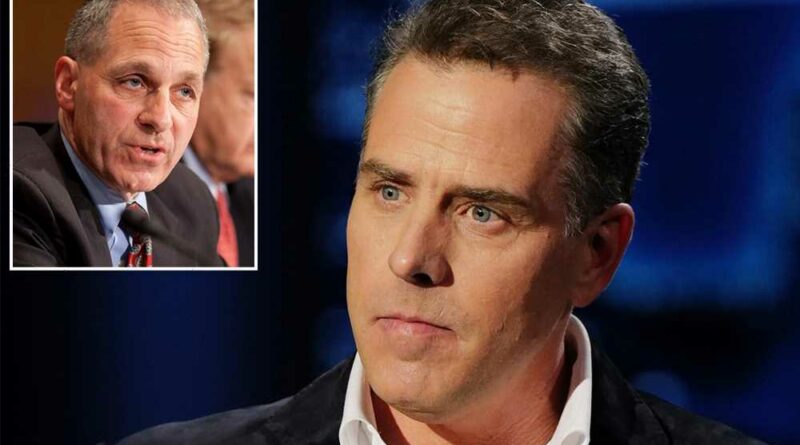 Hunter Biden’s ex-stripper baby mama was on his payroll while pregnant: texts

Hunter Biden and his colleagues at a high-powered law firm tried to leverage their government connections in the final months of the Obama administration in a failed bid to help a Romanian real estate tycoon avoid a conviction on bribery charges.

Emails obtained from Hunter’s abandoned laptop show the younger Biden — then working as a counsel at Boies Schiller Flexner LLP — reached out to former FBI Director Louis Freeh in June 2016 about the case of Gabriel Popoviciu, who was accused of acquiring land to build a Bucharest mall at a below-market price, the Daily Mail reported.

In a June 18, 2016, email, Hunter Biden told Freeh — then a partner at the Delaware-based law firm Freeh, Sporkin & Sullivan — that he believed Popoviciu was “a good man that’s being very badly treated by a suspect Romanian justice system … Time is of the essence and my client has never balked at bringing whatever team it takes together at whatever cost to obtain justice.”

While Freeh’s initial response, which began “Thanks for your note and for thinking of me,” was noncommittal, he was soon fully invested in Popoviciu’s case.

“I will see my good friend Ron Noble (former SecGen INTERPOL), in NY on Thursday,” Freeh wrote Hunter three days after the initial email, “and most likely he knows this DNA [Romanian National Anti-Corruption Directorate] prosecutor, Laura Codruta Kobesi, very well. Let me talk to him and see what the possibilities may be to meet with her and to initiate a dialogue which would remediate the situation.”

In a subsequent email, the former FBI head suggested Popoviciu had value to American law enforcement.

“FYI,” Freeh wrote in a July 8 email to Hunter Biden obtained by The Post, “I have had conversations with the head of the FBI’s Criminal Division and there is a sincere Bureau interest in meeting and debriefing Gabriel on other matters he may be willing to discuss.” Freeh did not elaborate on what those “other matters” were.

Later in the email, Freeh told Hunter Biden he would “like to make a small payment to you for this referral-and for your continuing work on this matter. This is a standard practice … We would just need your bank information in order to make a
remittance.”

“Thank you Judge Freeh … So honored that you agreed to take this on,” Hunter answered.

“Thank you Hunter and I would be delighted to do future work with you,” Freeh responded. “I also spoke to Dad [Joe Biden] a few weeks ago and would like to explore with him some future work options. I believe that working together on these (and other legal) matters would be of value, fun and rewarding.”

On May 17, 2016, one month before Hunter Biden contacted Freeh, Boies Schiller colleague Michael Gottlieb revealed in an email that he had reached out to then-US envoy to Romania Hans Klemm in an effort to help broker a meeting with Romanian prosecutors.

“I have reached out to Klemm and asked him to help us broker the meeting,” Gottlieb wrote. At that point, Hunter Biden suggested to Gottlieb it was “time to assemble a more high profile team that can speak to the injustice here … Mike I was going to reach out to Judge Freeh and if you can think of others of that stature I think now is the time to read them into the situation and see if they are willing to help.”

None of this maneuvering paid off. Popoviciu was sentenced by a Romanian court in 2017 to seven years in prison. In a statement at the time, Freeh described how he was retained to conduct an “independent review” of the case “with the assistance of a team of experienced former federal prosecutors and former FBI Special Agents, one of whom speaks Romanian fluently.”

“This sentence and conviction are not supported by either the facts or the law,” said Freeh.

Last month, The Post reported that Freeh gave $100,000 to a trust for two of President Biden’s grandchildren as he was attempting to woo the then-vice president to do work connected with his law firm.