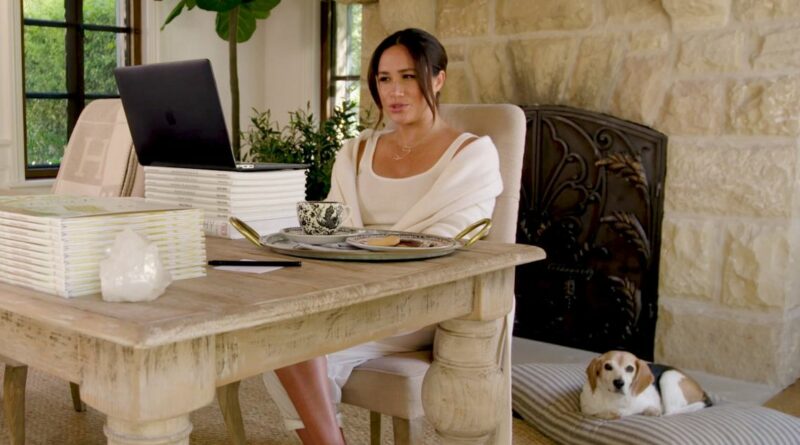 Eagle-eyed royal fans have been left in awe at Prince Harry and Meghan Markle’s home office, complete with plush chairs that face into the room “like thrones” and a stunning open fireplace behind them.

The Duke and Duchess of Sussex’s explosive Netflix documentary exposed several royal revelations on top members of the Royal Family – but some viewers have instead been left focusing on the pair’s interior decor.

Whilst most scenes throughout the bombshell six-part series were filmed in a rented mansion nearby, fans were treated to a few glimpses inside their gorgeous property.

Interviewer Allison P. Davis, who was handpicked by Harry and Meghan to write a feature on the pair, has seen their working from home set-up in person.

Writing in The Cut magazine, she revealed: "The two run Archewell from their shared home office, specifically from two plush club chairs placed side by side behind a single desk, facing into the room like thrones.”

Alongside the chairs – that cost a whopping £340 – the Sussexes have a white crystal and golden vase to store flowers and a floral tray with a cute teacup and plate.

A rustic wooden desk also sits in the room, with one video released also showing an eye-wateringly expensive Hermes blanket.

Although the first trailer for the Netflix documentary showed the £2,000 piece of fabric on an armchair with Meghan crying on the phone in front of it, the blanket was previously spotted on one of the chairs in their home office.

The revealing show quickly became one of the most popular series of 2022, with the first three episodes being watching an impressive 81.5m times – making it the most watched show in the whole of the UK and second most popular in the US.

But it didn’t translate into good ratings for the Sussexes, who were hit with poor reviews.

On Rotten Tomatoes, the docuseries has a score of 48% from critics and 12% from viewers, with IMDb giving it a score of 4.3 out of 10.