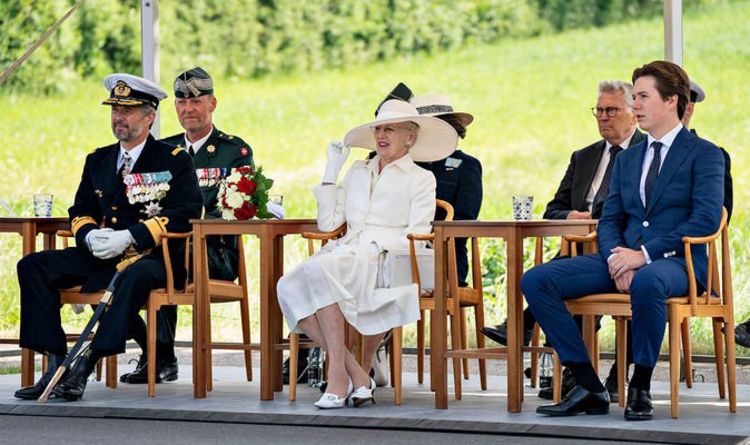 Queen Margrethe could 'stand down in April' claims expert

Queen Margrethe of Denmark has been enjoying her holiday in Chateau de Cayx, near the French village of Cahors. She was joined there by her younger son and his two children that he shares with his second wife, Princess Marie. Last weekend, the Danish Royal Family posted a photo on their social media accounts that showed Queen Margrethe, Prince Joachim, Prince Henrik and Princess Athena.

The caption underneath the picture included summer greetings from the Queen and stated that she would make her way back to Copenhagen on Monday, which was the last day of her summer break.

However, Princess Marie was absent from the picture and was not credited as the person who took the snap.

The Royal House credits every picture if it was taken by a member of the Royal Family.

Responding to the initial post, social media users were quick to express their worries about Princess Marie’s mysterious absence and try to find out her whereabouts.

One user wrote: “Where is Princess Marie?”

Another added: “Lovely! But where is Marie?”

A third person said: “Where is the princess?”

Another asked: “Lovely picture, but where is beautiful Marie?”

It has now been revealed that Princess Marie chose not to accompany her husband and children on their visit to France due to her engagements in Denmark.

On August 13, Princess Marie attended the opening concert of the Schackenborg Music Festival, and today she will open the Copenhagen Cooking Festival in her role as patron.

Her absence particularly stands out as she is of French descent and has strong ties with the country.

Princess Marie shared her love for France with the late Prince Consort Henrik.

Chateau de Cayx or Cayx Castle is an active vineyard and has been a staple in the Danish Royal Family’s holiday plans since it was bought more than 40 years ago.

Despite Prince Henrik’s passing in 2018, the tradition of spending a few days in his home country during the holidays has been maintained by the Queen.

The news comes a month after the members of the Danish Royal Family were accused of “sneaking around the rules” ahead of their attendance at the Euro 2020 semi-finals in London.

Crown Princess Mary, Crown Prince Frederik and their son Prince Christian were at Wembley Stadium to cheer on Denmark against England on July 7.

But the move was criticised by one of Denmark’s biggest newspapers, Ekstra Bladet, which ran a story titled: “It looks a little unfortunate”.

The article questioned how the future King and his family “managed to sneak around the rules” to watch the match in person without undergoing quarantine.

It read: “UEFA should have moved the last European Championship matches so that not only royals and VIPs have access to the coveted and decisive showdowns.”

The newspaper said thousands of Danes dreamt “of being able to watch Denmark’s semi-final” against England.

However, it added, this was not a possibility available to most fans “unless you have blue blood in your veins”.

Christian Kokholm Rothmann, chairman of Danish Football Fans, told the publication the royal attendance “looked a little unfortunate when the rest of us couldn’t get into England”.

However, he put the blame on UEFA rather than the royals.

He said: “The ones you have to be really mad at are UEFA.

“They should have moved the match from where the fans cannot access.”

Responding to the criticism raised, the Danish palace said Mary, Frederik and Christian were invited to cheer for Denmark at Wembley by The Danish Football Union (known as the DBU).

The Royal Family’s communications manager Lene Balleby said in July: “The Crown Prince Couple and Prince Christian have agreed to this, and they look forward to being there and backing up the Danish national team.

“It is only natural that the royal family represents Denmark”.