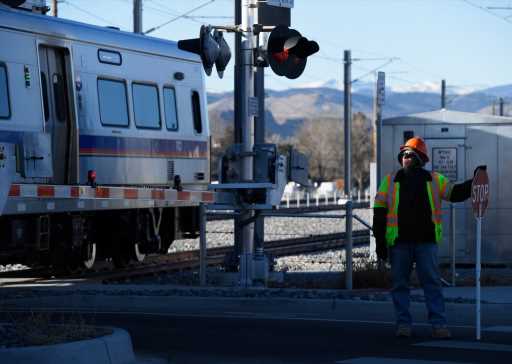 A quiet milestone passed this week: The Regional Transportation District has now waited two years — and counting — to learn whether it will have to pony up more than $100 million.

Lawyers for RTD and Denver Transit Partners spent nearly four weeks in a Denver courtroom in the fall of 2020, in the early days of the pandemic, presenting evidence and arguing over whether RTD should be responsible for covering major costs stemming from crossing-gate problems on three new commuter-rail lines. DTP, which shouldered those costs and sued for reimbursement, is a consortium of contractors that built the A, B and G lines and now operates them under a long-term public-private partnership deal.

Since then, Denver District Court Judge Andrew P. McCallin has worked behind closed doors on the ruling that will serve as the trial’s verdict, since there was no jury. He’s given no public indication of when it will come out. The parties’ final post-trial pleadings were filed in December 2020.

Two years is unusually long for a trial’s verdict to hang in the balance, a legal expert said.

“That doesn’t mean there aren’t good reasons for the length of time, particularly in cases where there are a lot of legal issues in play and there’s a lot of money and controversy,” said Christopher Jackson, a Denver appellate and litigation attorney who isn’t involved in the case. “But two years is on the longer side for the amount of time that you would wait for a verdict in a bench trial.”

The Denver Post reached out to the Colorado Judicial Department this month to check on the ruling’s status. Spokesman Rob McCallum said regular judicial reassignments at Denver District Court had resulted in the case being transferred to the docket of another judge — Mark Thomas Bailey, who joined the bench this month after being appointed by the governor to fill a vacancy.

But McCallum confirmed that McCallin still would handle the ruling, since he presided over the trial.

“I can tell you he’s actively working on finishing that order,” McCallum said. “It is still on his docket.”

In a civil bench trial, the verdict typically takes the form of a lengthy written document in which the judge issues factual findings and legal conclusions.

As of the trial, the contractors were seeking $111 million from RTD. The transit agency, in turn, disputed that it was responsible and counter-sued for $27 million in damages, citing missed deadlines and DTP’s failures to meet project requirements. Ultimately, any damages awarded in the court’s verdict could be adjusted to add interest.

If the contractors’ side wins, DTP likely will pass the money it’s awarded to the consortium’s design and construction contractors, since they paid for the extra project costs, according to a November 2021 ratings report by Fitch Ratings for debt issued on the project. But any ruling also would be open for either side to appeal.

Denver Transit Partners filed its lawsuit against RTD in 2018, following a series of setbacks on the commuter-rail projects.

The contractors struggled to get new wireless crossing-gate technology to work properly at road crossings. During testing, gates that were supposed to close 30 seconds before a train came instead would activate minutes in advance or, in some instances, cut it way too close.

Flaggers stood by at train crossings for more than two years on the A-Line to Denver International Airport and the B-Line to Westminster. The opening of the G-Line to Wheat Ridge and Arvada was delayed from late 2016 to April 2019, largely because of the crossing issues. All three lines originate at Union Station.

Regulatory approvals also played a role in the delays. During the trial, the arguments centered in part on those regulatory decisions and whether they triggered contractual provisions that would shift responsibility for unforeseen costs from the contractors to RTD.

While the crossing technology now works, the signal problems have been the most significant hiccup in RTD’s relationship with Denver Transit Partners.

An RTD spokeswoman confirmed last week that the claims and issues raised by the trial remain unresolved but declined to comment on the verdict delay.

In a statement, Denver Transit Partners said: “This matter went to court in accordance with the process outlined in the Dispute Resolution section of our Concession Agreement. We remain focused on our long-term partnership with RTD and delivering a high level of service to Denver area commuter rail passengers.”