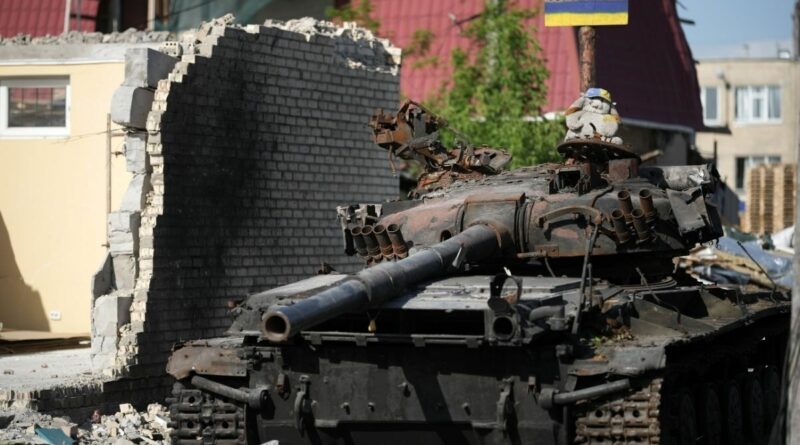 Russian forces 'are afraid of us' says Ukrainian soldier

Russian forces launched fresh attacks on towns in the east of Ukraine this week in an attempt to gain ground in the Donbas region. The Kremlin’s troops shifted their assault to the eastern region last month after Russia failed to topple the capital Kyiv in the first phase of the war.

Moscow is attempting to seize the Donbas region of two eastern provinces, Donetsk and Luhansk, which is home to two Russian-separatist movements.

Russia claims the “liberation” of the region is one of the key aims of what it calls its “special military operation”.

However, a former NATO task force commander has said Moscow has failed to synchronise its units to effectively fight off Ukrainian defences.

“We’re definitely entering a phase where it appears that no one’s going to make any quick dashes to victory.”

Russian troops have come up against stiff resistance from Ukrainian forces, who have inflicted heavy losses of military personnel and equipment.

In its latest intelligence update on the war, Britain’s Ministry of Defence said Russia’s failure to anticipate Ukrainian resistance and the complacency of Russian commanders has led to significant losses across many of Russia’s more elite units.

Ukraine’s defence of the capital Kyiv forced Russian troops to retreat from the capital in March, when Ukrainian forces took back the city and surrounding areas.

Authorities finally opened the city’s underground metro on Tuesday where thousands of civilians had sheltered for months, indicating that Ukrainian forces had succeeded in pushing Putin’s troops out of Kharkiv’s artillery range as they did from Kyiv in March.

He said: “Yes, there’s a (Russian) push on in the east, but it’s not going to be a lightning-fast push.

“The Russian morale compared to the Ukrainian morale is poor, and as a result, they can’t commit soldiers to the same sort of vigorous assaults they could have if they had high morale, and they are sending artillery rounds rather than human beings in order to grind the Ukrainians down.”

However, in order for Ukraine to keep pushing back Russia’s assault, they need to be bolstered by “more sophisticated weapons” from western countries, he added.

Ukraine’s president has pleaded with the west to send more weapons to the country’s military in the face of Russia’s intensifying assault on the eastern Donbas region.

In his nightly address on Wednesday, May 26, he said: “We need the help of our partners – above all, weapons for Ukraine. Full help, without exceptions, without limits, enough to win.”

Earlier in the day, Ukraine’s foreign minister Dmytro Kuleba told the World Economic Forum in Davos that NATO was doing “virtually nothing” to help Ukraine.

Russian forces shelled more than 40 towns in Donbas on Wednesday, according to Ukraine’s military, threatening to shut off the last main escape route for civilians trapped in the path of their invasion.

The city of Sievierodonetsk is in danger of being completely encircled, with the governor of the Luhansk region warning that the area was now without gas supplies and had limited water and electricity after the last gas supply station was hit.

Russia’s ministry of defence claims that, as a result of their operations in Ukraine in the last 24 hours, more than 350 Ukrainian fighters were killed and 96 units of weapons and military equipment disabled.

President Zelensky has rejected the notion that his country should give up any of its territory to make peace with Russia.

Speaking in his address on Wednesday, he said: “Symptomatic editorials began to appear in some western media stating that Ukraine must allegedly accept so-called difficult compromises by giving up territory in exchange for peace.”

He said those who advise Ukraine to give up territory fail to see the ordinary people “who actually live in the territory they propose to exchange for the illusion of peace.”

Presidential adviser Oleksiy Arestovych added: “No one is going to trade a gram of our sovereignty or a millimetre of our territory.

“Our children are dying, soldiers are being blown apart by shells, and they tell us to sacrifice territory. Get lost. It’s never going to happen.”