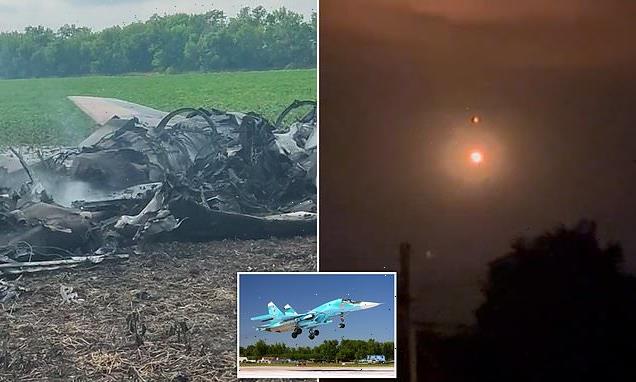 Russia appears to have shot down one of its own $40million fighter jets in the skies over eastern Ukraine, in just the latest humiliation for Putin’s military.

Footage of a flaming wreck falling from the skies over Alchevsk, in Luhansk, first emerged overnight Sunday when pro-Moscow Telegram accounts posted it – saying  ‘allied forces’ had shot the aircraft down.

But more video of the wreck on the ground emerged the following day and revealed the words ‘Russian Aerospace Forces’ written down the side of the aircraft.

It now appears that Putin’s men shot down one of their own jets – identified online as a rare $40million variant of the Su-34 fighter-bomber. 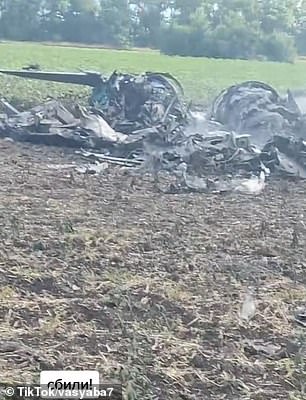 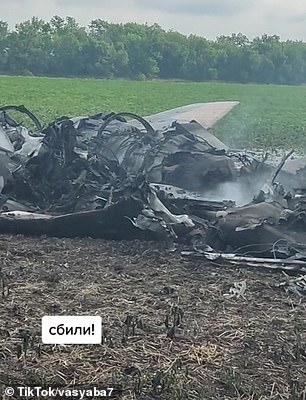 Russia appears to have shot down a rare $40million Su-34M fighter-bomber in the skies over eastern Ukraine, after wreckage was spotted near the town of Alchevsk 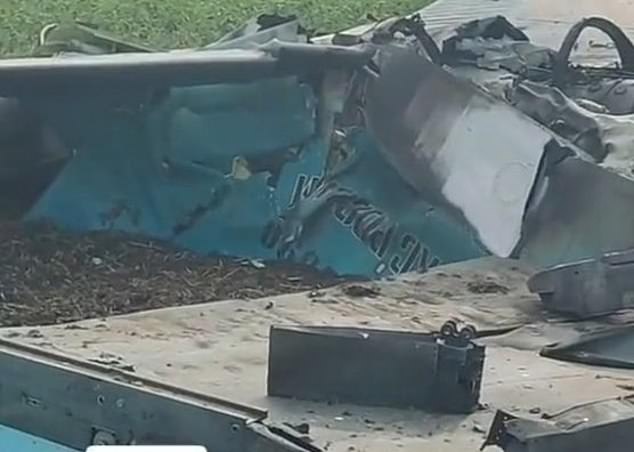 Writing on the side of the plane appeared to read ‘ВКС Россия’ which is an acronym for Russian Aerospace Forces, while a partial serial number revealed the jet as an Su-34M

HIMARS have been playing havoc with Russia’s invasion by taking out headquarters and ammo dumps deep behind the frontlines, with Putin’s anti-air seemingly struggling to stop them.

Michael Weiss, a respected security correspondent, tied the two events together – tweeting that: ‘They just downed their own Su-34, aiming at HIMARS.’

The incident was first brought to light by Yevgeny Poddubny, who runs a pro-Russian Telegram channel that typically posts videos of Putin’s forces striking Ukraine.

Late Sunday, he published footage of a flaming ball falling from the skies over the city of Alchevsk, in Russian-occupied eastern Ukraine.

Alongside the video, he wrote: ‘Last night, the air defense crew of the allied forces destroyed a target in the sky over Alchevsk (LPR).

‘The nature of the target is not clear. The burning ball fell to the ground for more than a minute.’

The following morning, footage of the wreck emerged showing what appeared to be the burning remains of an Su-34 fighter-bomber.

Visible on the side of the aircraft was what appeared to be the words ‘ВКС Россия’ – an acronym which stands for ‘Russian Aerospace Forces’.

A partial serial number was also visible, ending in ’90’. According the Dutch Aviation Society, there is only one Su-34 jet whose serial number ends in ’90’ and it is a highly-advanced Su-34M variant.

The fighter-bombers – only 10 of which existed before the shoot-down – are almost exclusively flown by the 277th Bomber Aviation Regiment.

Russian state media has previously confirmed the 277th is deployed near Ukraine.

The Su-34M is a highly upgraded version of the basic Su-34, which is a long-range fighter-bomber designed to rival the American F-15.

Russia bragged at the time the aircraft was created that it has upgraded avionics, radar, communications systems, electronic warfare and weapons systems.

Losing such an advanced and rare jet is just the latest battlefield humiliation for Putin’s military, almost five months into what was supposed to be a days-long ‘special military operation’. 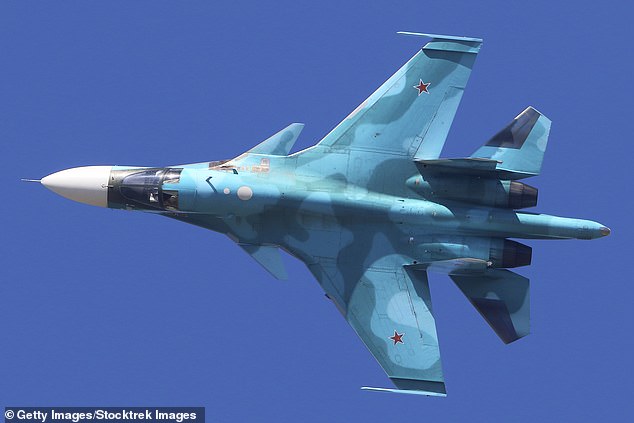 Just 10 Su-34M fighter-bombers have ever been built and they are one of Russia’s most-advanced jets, costing around $40million each (file image)

In that time, Russia’s army – once considered the world’s second-best – has been forced to retreat from Kyiv and much of Ukraine’s north after their offensive stalled.

Having abandoned attempts to take the capital, Putin’s generals turned their attention to the eastern Donbas in the hopes of capturing it wholesale and possibly surrounding a large part of Ukraine’s army in the process.

But that plan has also failed, with months of hard fighting leading to the capture of three cities – Mariupol in the south, and Severodonetsk and Lysychansk in the north.

While taking the cities are victories for Russia, they have come at a huge cost and only marginally shifted the frontline from where it stood before the war.

Ukraine, meanwhile, has been hitting back – sinking the Black Sea’s flagship Moskva and retaking the small but strategic Snake Island.

A counter-attack is also underway near the southern city of Kherson, which was taken by Russia in the early days of the war.

Progress here has been slow and bloody, with Kyiv said to have taken heavy losses, but it has achieved some success.

Meanwhile the assault on Donbas has all-but halted as troops are pulled from that front to reinforce the south, and as American-made HIMARS rockets devastate Russian command posts and artillery dumps.

Russia’s main war aim now appears to be to hold on to the limited gains it has made since the start of the war, in the hopes of giving Putin the strongest-possible negotiating hand when it comes time to strike a peace deal.

Ukraine, meanwhile, is gambling its remaining manpower and whatever weapons it can get from the West on retaking territory before support for the war ebbs.