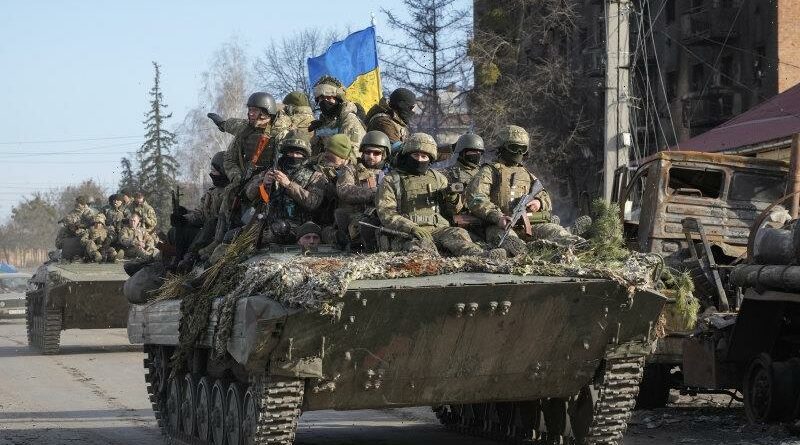 Lviv/Kharkiv: Civilians have had no respite in besieged Ukrainian cities, especially the devastated port of Mariupol, whose mayor said 160,000 people were still trapped inside and Russia was blocking attempts to evacuate them.

But the mayor of Irpin, near Kyiv, said Ukrainian forces had seized back full control of the town. “We have good news today – Irpin has been liberated,” Oleksandr Markushyn said, adding that it expected further attacks. 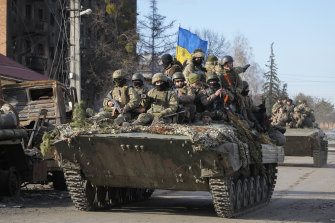 Ukrainian soldiers ride on APC through the town of Trostsyanets.Credit:AP Photo/Efrem Lukatsky

“The Ukrainians are continuing to try to take back ground,” a senior US defence official said on condition of anonymity, telling reporters the eastern town of Trostyanets, south of Sumy, was back in Ukrainian hands.

Ukraine and Russia were preparing on Tuesday (AEDT) for the first face-to-face peace talks in more than two weeks, but a senior US official said Russian President Vladimir Putin did not appear ready to make compromises to end the war.

Ukrainian officials also played down the chances of a major breakthrough at the talks, due to be held in Istanbul after Turkish President Tayyip Erdogan spoke to Putin on Sunday.

But the fact that they were taking place in person at all – for the first time since an acrimonious meeting between foreign ministers on March 10 – was a sign of shifts behind the scenes as Russia’s invasion has stalled and sanctions have hit home.

Russia’s defence ministry, for its part, said its troops had destroyed large ammunition depots in the Zhytomyr region west of Kyiv and had hit 41 Ukrainian military sites in the past 24 hours. Reuters could not immediately verify any of the reports.

In Kharkiv, Ukraine’s second-biggest city and one of its hardest hit, people were sweeping rubble out of a classroom on the third storey of a school, where a wall had been blown out by a missile before dawn.

“They’ve not been able to take the city, so they’ve decided to destroy it,” said Oleksandr, who had been sheltering with his mother on a lower floor of the school after their own neighbourhood was hit. 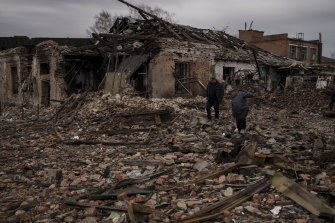 Residents walk on the rubble of destroyed buildings in the town of Trostsyanets.Credit:AP Photo/Felipe Dana

Abramovich, who accepted a Ukrainian request to help negotiate an end to the Russian invasion of Ukraine, and at least two senior members of the Ukrainian team, were affected, the WSJ report said.

Rustem Umerov, another member of the negotiating team, urged people not to trust “unverified information”.

Russia’s military signalled last week it would concentrate on expanding territory held by separatists in eastern Ukraine, but Ukraine said it saw no sign Russia had given up a plan to surround the capital, which it targeted in its February 24 invasion.

Kyiv’s mayor, Vitali Klitschko, said 100 people had been killed, including four children, and 82 multi-storey buildings had been destroyed. It was not possible to verify the figures.

“We have destroyed the myth of the invincible Russian army. We are resisting against the aggression of one of the strongest armies in the world and have succeeded in making them change their goals,” Klitschko said.

But a senior US State Department official said Putin did not give that impression. “Everything I have seen is he is not willing to compromise at this point,” the official told Reuters on condition of anonymity after Ukraine’s president sketched out a potential way to end the crisis over the weekend.

The Kremlin said Biden’s surprise comment about Putin at the end of a speech in Warsaw at the weekend, “For God’s sake, this man cannot remain in power” was “certainly alarming” after earlier saying it was up to Russians to choose their leader.

Biden had said he was not calling for regime change.

Russia calls its actions in Ukraine a “special military operation” to disarm and “denazify” its neighbour. Kyiv and the West consider this a pretext for an unprovoked invasion to try to topple the elected Ukrainian government.

Last week, Ukrainian forces pushed Russian troops back in areas around Kyiv, the northeast and the southwest, while Russia kept up pressure in the southeast near separatist areas, including its devastating siege of Mariupol.

Mayor Vadym Boichenko, speaking from an undisclosed location outside the city, said 26 buses were waiting to evacuate some of 160,000 trapped civilians but Russia was denying safe passage.

“People are beyond the line of humanitarian catastrophe,” Boichenko said on national television. “We need to completely evacuate Mariupol.“

A spokesperson for Boichenko said later that nearly 5,000 people had been killed and 90 per cent of buildings damaged, of which 40 per cent were destroyed.

Deputy Prime Minister Iryna Vereshchuk said intelligence reports of possible Russian “provocations” along evacuation routes out of besieged cities meant there were no plans for such evacuations on Monday.

The UN human rights office said 1119 civilians had been killed and 1790 wounded since Russia began its attack on Ukraine.