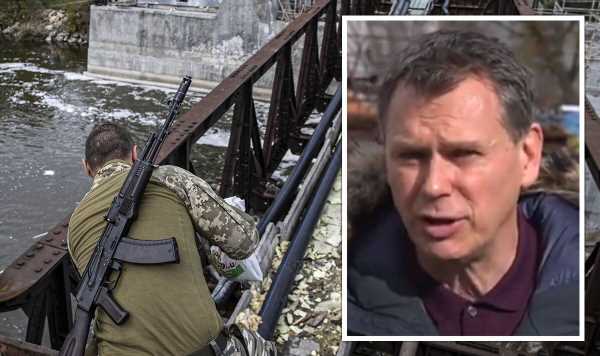 Russian forces in the region have been driven back in recent weeks and risk being trapped on the west bank of the Dnipro River, where the provincial capital of Kherson has been in Russian hands since the early days of the invasion of Ukraine eight months ago. Russian-installed authorities have been encouraging residents to flee to the east bank, but Oleksiy Arestovych, an adviser to Ukrainian President Volodymyr Zelensky, said there was no sign that Russian forces themselves were preparing to abandon the city. Sky News Europe correspondent Adam Parsons said: “We were told that Russian troops have begun to move out in what seems to be not a surrender but a tactical withdrawal.

“Over the past 24 to 48 hours very senior figures within the Ukrainian leadership say they don’t think that’s happening.

“They think it’s effectively a bluff and Russia is going to defend Kherson and put people in that are not going to retreat without a fight.

“What that is laying the ground for is a very significant conflict between Ukrainian and Russian forces, potentially one of the bloodiest battles of this eight-month war so far.

“It is hard to get information out of that region about what are the military preparations.

“What we can clearly see are Ukrainian forces heading towards Kherson.

“The question of just how many Russian forces are coming into the city is a matter for debate and it’s something the Ukrainian leadership are well aware of.”

Mr Arestovych said in a statement: “With Kherson everything is clear. The Russians are replenishing and strengthening their grouping there.

“It means that nobody is preparing to withdraw. On the contrary, the heaviest of battles is going to take place for Kherson.”

Of the four provinces Russian President Vladimir Putin proclaimed annexed in September, Kherson is arguably the most strategically important. It controls both the only land route to the Crimea peninsula Russia seized in 2014 and the mouth of the Dnipro, the vast river that bisects Ukraine.

Yuri Sobolevsky, a member of the ousted pro-Ukrainian Kherson regional council, said Russia-installed authorities were putting increasing pressure on Kherson residents to leave the city and head towards Russia.

“Search and filtration procedures are intensifying as are searches of cars and homes,” he wrote on the Telegram messaging app, referring to the questioning and detention of people by Russian forces before some are taken further into Russian-held territory.

Russia says it is evacuating people for their own safety.

frontline heard no shooting or artillery fire on Tuesday. Residents said they hoped Russian forces would soon withdraw from Kherson.

“You fall asleep at night and you don’t know if you will wake up,” said Mikola Nizinets, 39, referring to Russian shelling.

With no power or gas and little food or potable water in the area, many residents have fled, abandoning cattle to roam among expended munitions poking from the soil.

In the northeast, Russian forces continued to try to seize the town of Bakhmut, which sits on the main road leading to the cities of Sloviansk and Kramatorsk in the Donetsk region, Ukraine’s General Staff said on Wednesday.