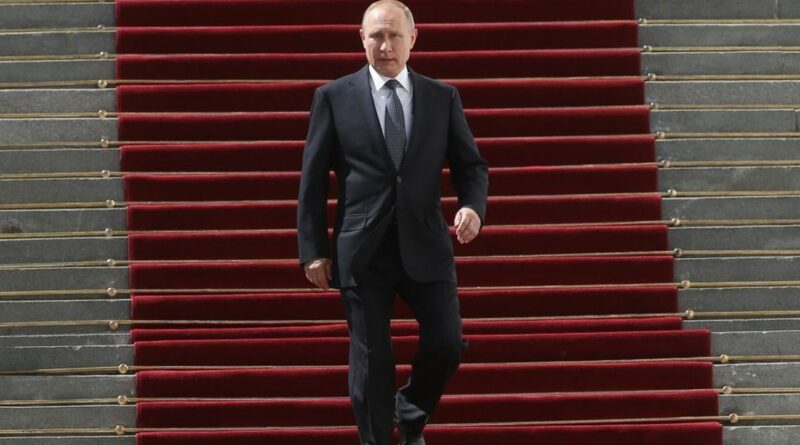 Vladimir Putin's press office has issued a statement denying that the Russian President soiled himself after falling down a flight of stairs.

A post on Telegram from General SVR claimed the war monger had slipped and fallen down five steps after a long day.

The story went on to claim that the fall resulted in Putin landing on his tail bone, causing him to “defecate involuntarily”.

READ MORE: Russian losses in Ukraine to double US losses in Vietnam in one 10th of the time

However, the account is unsubstantiated and it often makes unverified anti-Kremlin claims.

According to the account, Putin was walking downstairs when he “stumbled and fell to his back, after which he fell on his side and slid down a couple of steps".

They said: “The incident took place in front of the president's bodyguards, who reacted quickly and rushed to Putin's aid.

“Three security officers helped the president to get to the nearest sofa and called the doctors who are on duty at the residence.”

Medics “arrived within a few minutes, but could not immediately examine the president”, due to him suffering "oncology of the gastrointestinal tract, as a result of which he already experiences serious problems with digestion” and the fall caused an “involuntary” reaction.

Putin's health is a regular subject on the page, with speculation he is unwell becoming more prominent following his decision to invade Ukraine.

Newsweek reports that in an email on Tuesday (December 6), the Press and Information Office of the President of the Russian Federation denied claims that Putin fell down the stairs, suffered a bruised tail bone and soiled himself.

"Regarding your request, we can say that this is completely untrue," the email said.

Putin has been the subject of several rumours regarding his health in recent years, most commonly that he has been diagnosed with a type of cancer or Parkinson's.

However, these suggestions have been repeatedly denied by Russian authorities.

In July, the Kremlin again looked to shut down speculation about Putin's well being.

"Everything is fine with his health," Kremlin spokesman Dmitry Peskov said of Putin in an article at the time.

"You know that Ukrainian information specialists, and American and British ones, have been throwing out various fakes about the state of the president's health in recent months—these are nothing but fakes."

Many of the rumours surrounding Putin have pointed to his clenching of tables in recent pictures and videos, which it has been claimed is an attempt to prevent himself from shaking – a common symptom of Parkinson's.