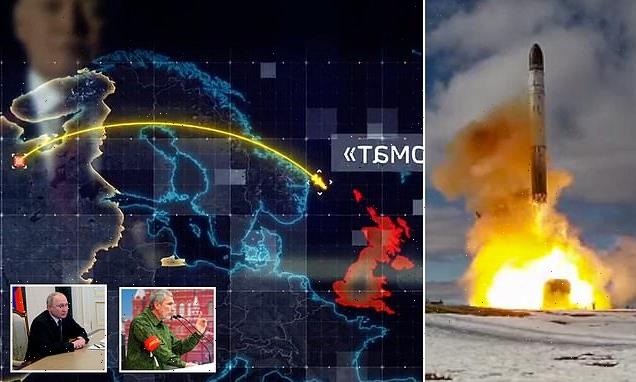 A senior Putin ally threatened to fire a nuclear weapons at Britain, claiming it would take just three minutes.

Finland, which is poised to join NATO, would be wiped out in ten seconds, Duma defence committee deputy chairman Aleksey Zhuravlyov boasted.

The news came as Russia cut off electricity supplies to Finland this morning. The Nordic country imports ten per cent of its electricity from Russia. 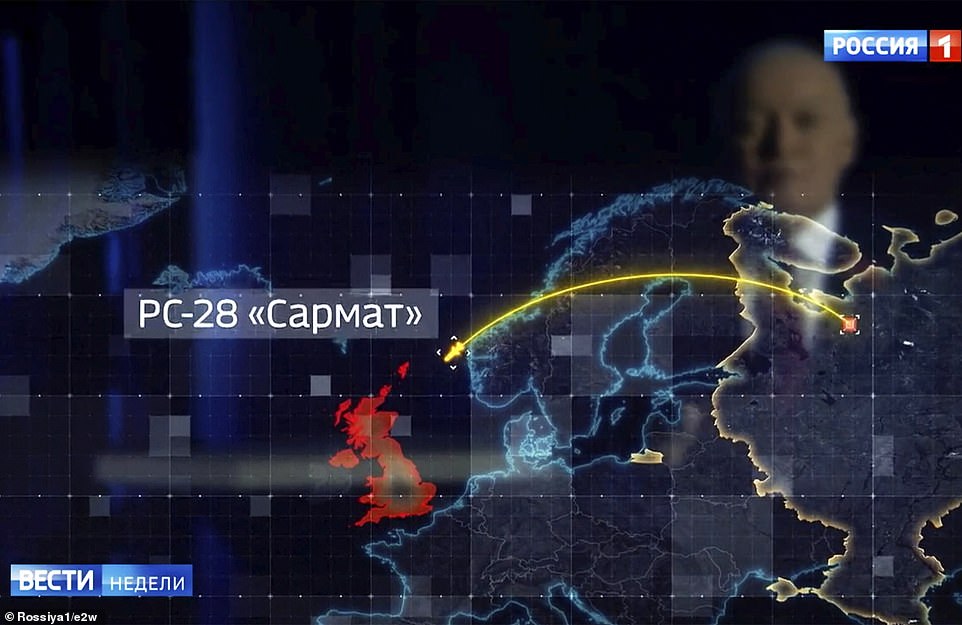 Russian power flows to Finland stopped as the state-owned importer has not received payments.

RAO Nordic had warned on Friday: ‘Unfortunately, we are forced to note that for the volumes which have been sold on Nord Pool exchange since May 6 funds have not yet been credited to our bank account.’

There’s enough electricity in Finland even without imports from Russia, according to Fingrid Oy, which operates the country’s transmission system.

Those flows have recently accounted for around ten per cent of consumption, it said in a statement.

Zhuravlyov said: ‘If Finland wants to join this bloc, then our goal is absolutely legitimate – to question the existence of this state. This is logical.

‘If the United States threatens our state, it’s good: here is the Sarmat [Satan-2 missile] for you, and there will be nuclear ashes from you if you think that Russia should not exist.

‘And Finland says that it is at one with the USA. Well, get in line.

‘The Finns in general should be grateful to Russia for their statehood, for the fact that Finland exists as a country.’ 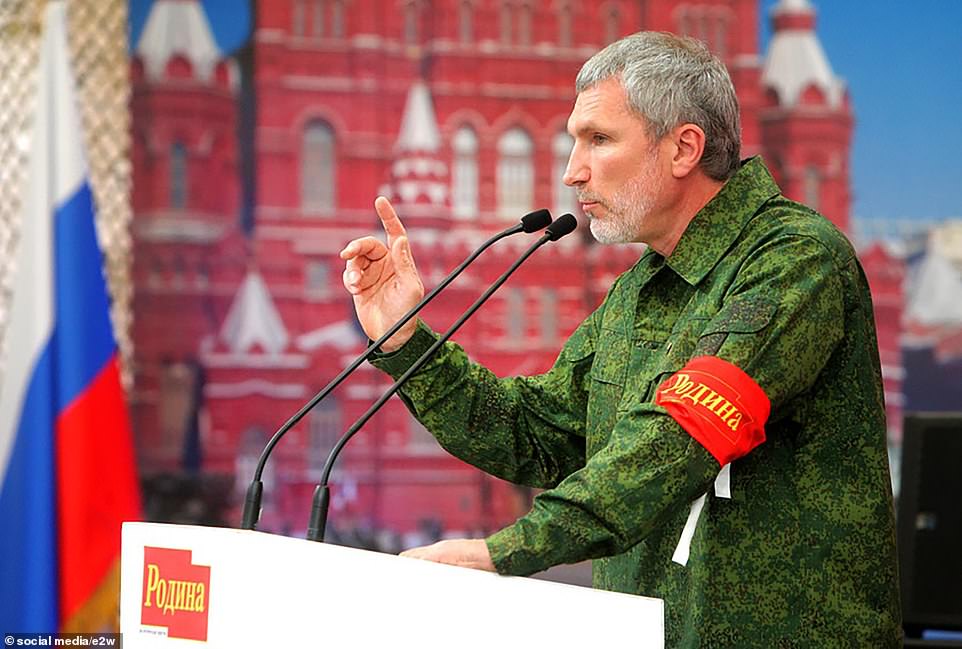 Asked if Russia would now rebase nuclear weapons onto its border with Finland, he said: ‘What for? We don’t need to.

‘We can hit with a Sarmat from Siberia, and even reach the UK.

‘And if we strike from Kaliningrad… the hypersonic’s reaching time is 200 seconds – so go ahead, guys.

‘On the Finnish border we will have not strategic weapons, but Kinzhal-class, one that will reach Finland in 20 seconds, or even 10 seconds.’

He said Russia would massively strengthen its military forces on its western flank. 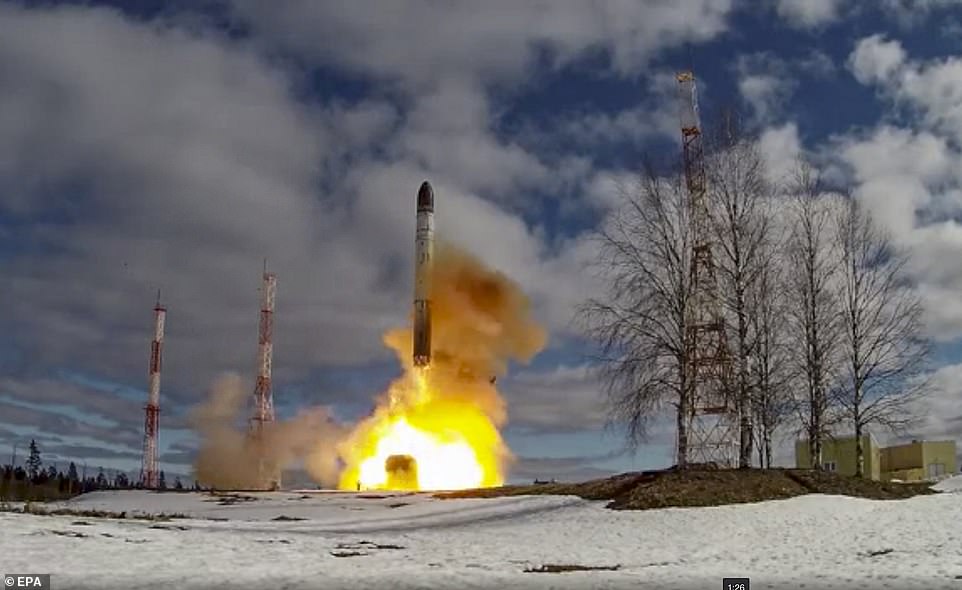 ‘This is natural. If so far we had not predicted possible hostilities on the part of Finland, then now they are quite possible.

Fiery Putin ally on Russian parliament’s defence committee has boasted about how quickly nukes can reach Finland and the UK.

In December last year he called for United States Congressman Ruben Gallego to be kidnapped and jailed for his support of arming and training the Ukrainian military.

A month later he claimed Russia should put nuclear weapons in Cuba and Venezuela as a response to military aid from NATO given to Ukraine and Georgia.

He is chairman of the Rodina political party, a far right nationalist party, which supports Vladimir Putin in the State Duma.

‘On a side note, this is the first state TV host who doesn’t seem to be eager to die for the Motherland, arguing with a trigger-happy lawmaker.’

‘And this must be taken into account, without a doubt.’

He claimed Finland is being provoked into joining NATO by the US and Britain.

‘The Finns have nothing to share with us. They receive more than 90 per cent gas, timber and much more from us.

‘Who needs fighting first of all? The Finns? They are not afraid that Russia is attacking them. ‘Of course, sooner or later the Americans will force them to do so.

‘Just as they forced Ukraine to do it, they are trying to force Poland and Romania. And, as practice shows, they succeed.

‘It is impossible to say that Finland will join NATO and behave towards us as before – this will not happen. The Americans will incite them to provocations.

‘We endure for a long time. But this cannot go on forever.’

Reflecting a view among hardliners around Vladimir Putin he said: ‘The United States will do everything possible to make World War III happen.

‘Just not on their territory.

‘They will try not to lead to nuclear strikes, but they will try to draw the whole of Europe into a conflict with Russia, inflame the situation in Asia, [and] set fire to as many countries as possible .

‘For them this will be a very good way out of the internal economic crisis.

‘They will be able to attribute all their problems to the war, as they already did in the First World War and the Second World War.

‘They got out of their crisis only thanks to the war in Europe. But there is a big danger: who guarantees that nuclear missiles will not fly? I do not guarantee this.’

Asked by Ura news outlet if Russia could strike first with nuclear weapons, he replied: ‘Certainly.’

Asked under what conditions, he replied this would happen if the existence of Russia was threatened.

Finland and Sweden were now ‘joining an Alliance that wants to destroy Russia. Therefore, we want to destroy them in response.’

Asked about Baltic countries Lithuania, Latvia and Estonia, he said Russia would crush them when necessary.

‘We are definitely not afraid of these peanuts,’ he said.

‘They are as nasty as stink bugs. But they will need to be crushed when necessary. Now the bug is small and smelly. 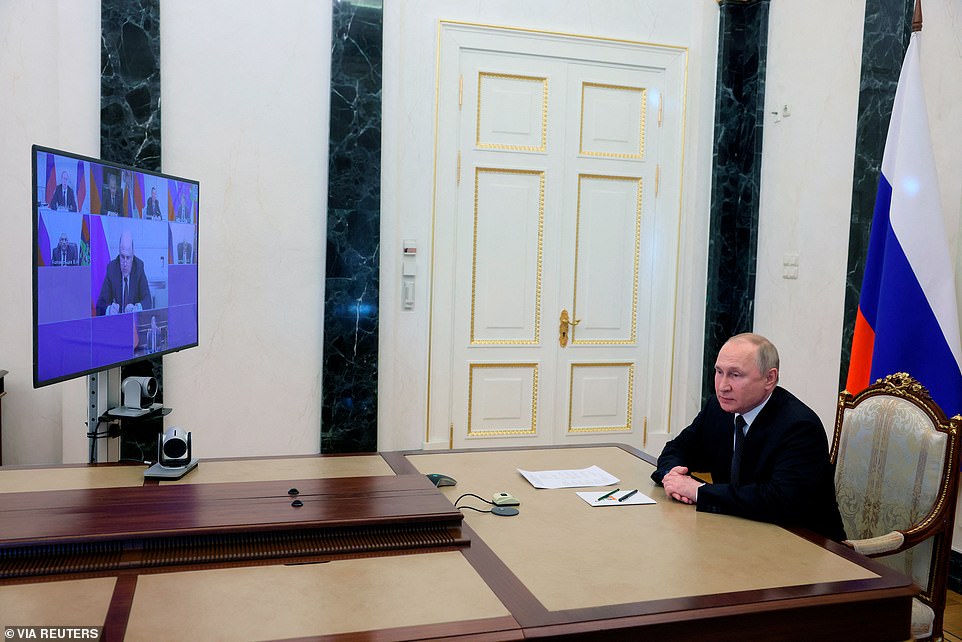 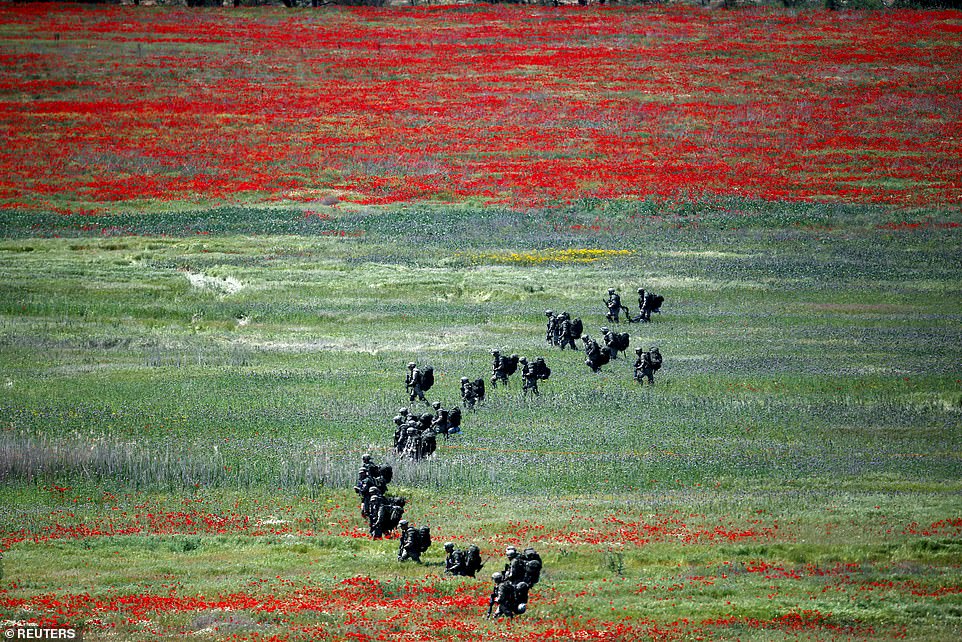 ‘They would have put forward territorial claims against us, as Estonia wanted to do. Well, try it. They follow exactly the same path as Ukraine. Let’s see where it takes them.’

He claimed that St Petersburg – Putin’s birthplace – could be NATO’s first target in a war with Russia.

‘This is the main goal [in this direction]. This is beyond any doubt,’ he said.

‘The question is different. Today we are conducting a special operation, saving every life of the civilian population, and the Ukrainian Nazis, on the contrary, because these are not their people, and for them the more victims, the better.

‘If the Finns want to destroy a certain part of our population, if they strike at St. Petersburg, this threatens to destroy all of Finland as a state. Well, how else? ‘How can a normal person perceive this: you have destroyed a little bit – we have a little bit? No, it won’t.’ 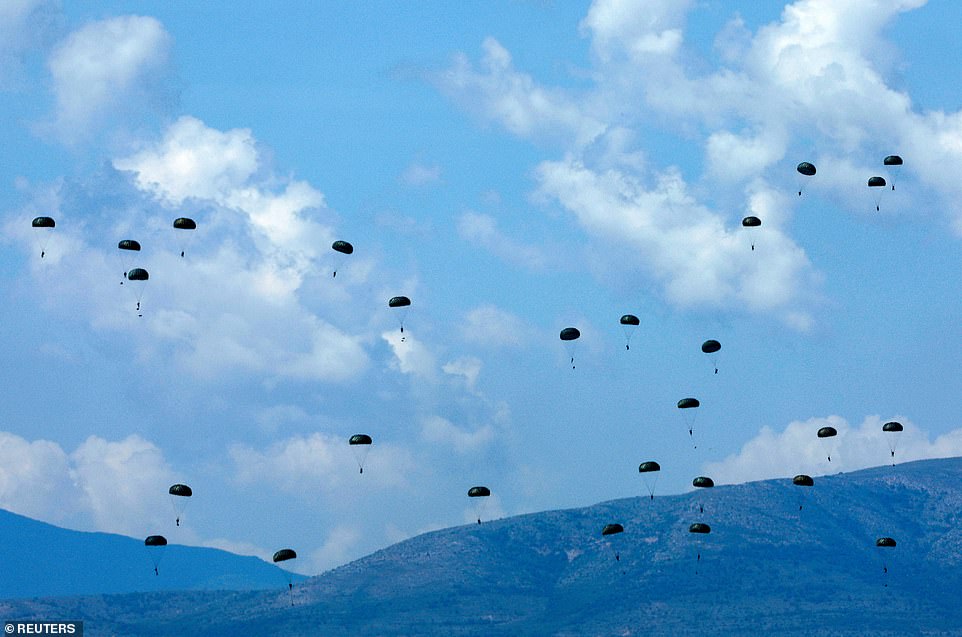 Putin has said the weapon is ‘unstoppable’ by the West with ‘no analogues…in the world for a long time to come’.

It is due to be deployed this year.

He proposed use of Satan-2 to wipe England from the map.

Next, Russia should ‘plunge Britain into the depths of the sea’ with its ‘underwater robotic drone Poseidon’ causing a 1,640ft tsunami.

Russian ex-president Dmitry Medvedev warned this week of the risk of nuclear war.

The Kinzhal hypersonic missile has been deployed with conventional warheads in the Ukraine war – but is also nuclear capable.

Russia separately urged its people not to travel to Britain, and vowed to block UK citizens seeking to enter its country. 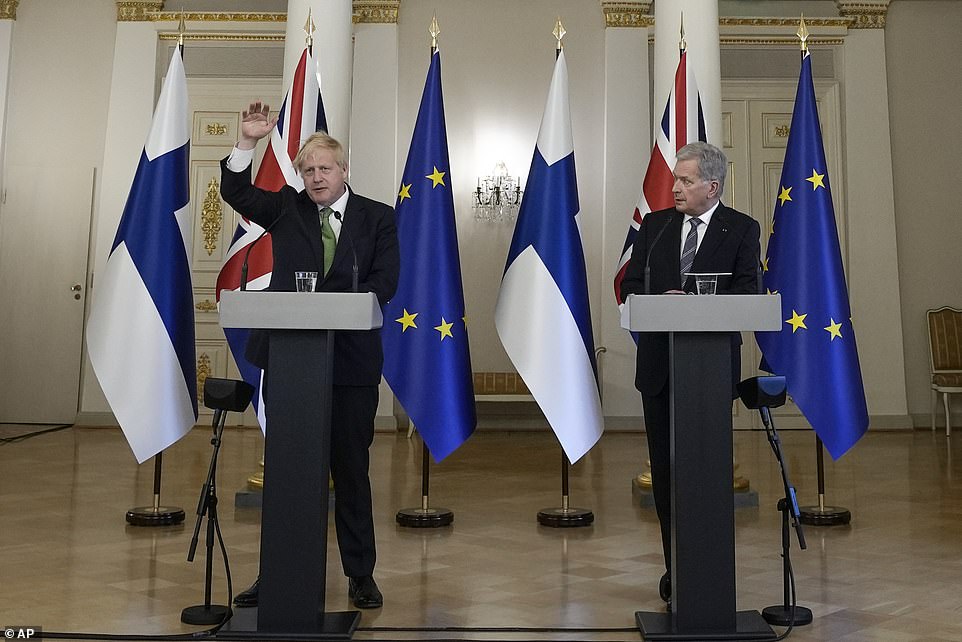 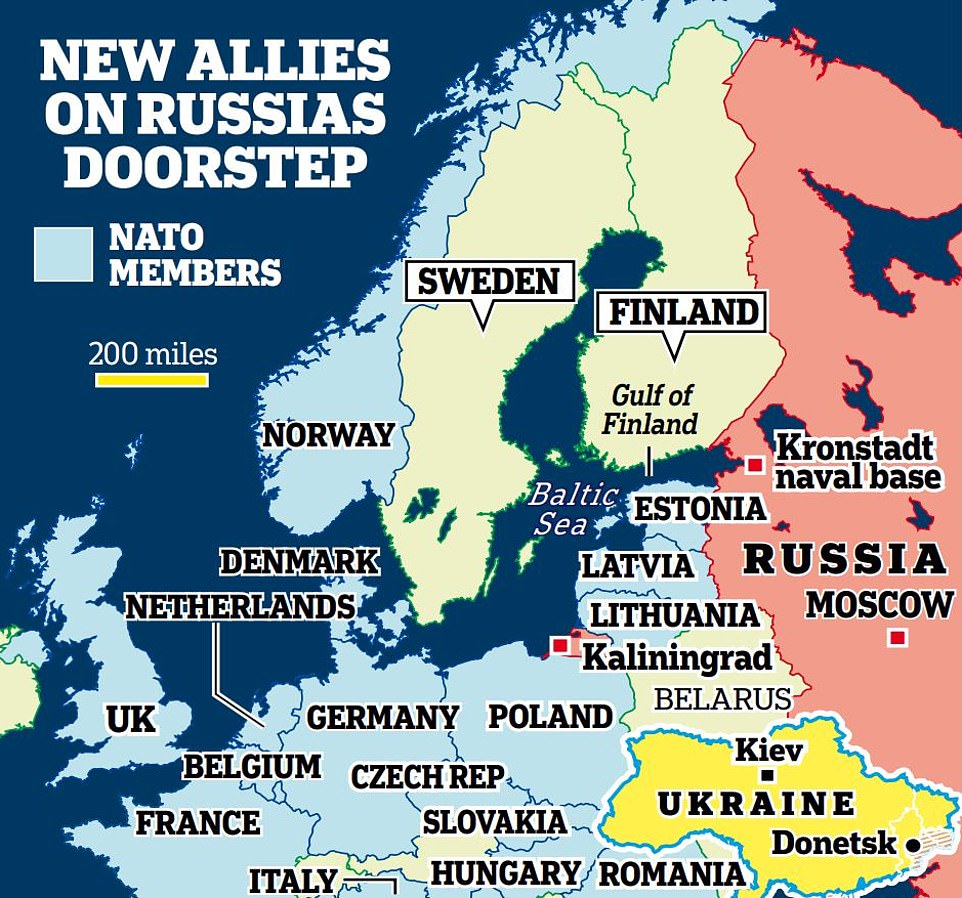 Finland, which shares an 830-mile border and a difficult past with Russia, has previously remained outside NATO

It is unclear if the moves presage a more serious diplomatic rift with London.

Moscow blames Britain for acting as a Western coordinator and cheerleader of the tough NATO response to Putin’s invasion of Ukraine.

In a statement, the Russian foreign ministry said: ‘Taking into account the extremely unfriendly course of the UK towards our country, in order to avoid financial losses and other possible problems, we recommend that Russian citizens refrain, if possible, from traveling to the UK and trying to obtain British visas.

‘Until the situation is normalised, we will act in the same way with respect to the British.’

The statement said: ‘Recently, the Russian Foreign Ministry has received numerous complaints from Russian citizens that it has become virtually impossible or extremely difficult for them to obtain a visa to the UK.

‘We are talking not only about tourists, but also about Russians working in the United Kingdom on contracts, as well as those who want to visit relatives or reunite with their families. 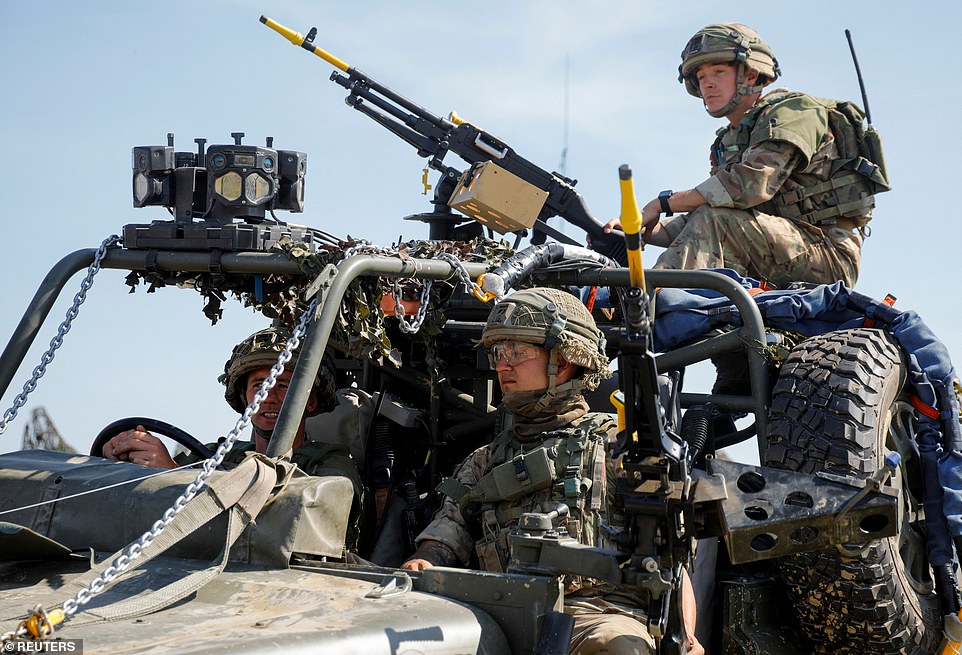 ‘In this regard, the issue of the current unacceptable situation was raised with the British embassy in Moscow, and they demanded clear explanations regarding the essence of the problem.

‘According to the explanations of the British, at present the UK Visa Service allegedly gives priority to the processing of visa applications for Ukrainian refugees.

‘For this reason, consideration of applications for British visas of Russians is significantly delayed.’

The ministry complained that ‘the situation is aggravated by the aspect associated with the mandatory prepayment of the consular fee by bank transfer after filling out the electronic questionnaire.

‘Given the anti-Russian sanctions imposed by London, it will not be possible to pay with Visa or Mastercard cards of the Russian issuing bank, since this must be done on the British website.

‘They directly pointed out to the British that this approach of London to ordinary citizens of our country contradicts all previously reached Russian-British agreements on consular issues.

‘They also declared the absolute unacceptability of such a dismissive attitude towards the Russians.

‘The corresponding actions of British officials can only be described as a politicised infringement of the rights of Russian citizens.’

When Russia last tried to seize Finland… and failed

More than 80 years ago, the small Finland took on the might of the Soviet Union when dictator Joseph Stalin ordered an invasion after its government refused to give up substantial territory.

The Winter War of 1939-1940 – which began less than three months after the start of the Second World War – saw Finland’s forces use innovative tactics to defy Russia’s hopes for a quick, emphatic victory that could have landed Stalin control of the whole country.

Instead, Soviet troops – who numbered around one million – were fiercely resisted for nearly three months, with dramatic photos showing how vehicles and equipment had to be abandoned in the face of the opposition and freezing conditions.

Stories of Finnish heroics include that of a Finnish farmer who became the deadliest sniper in history after killing 505 Soviet troops.

In the fighting, Finland also pioneered the use of the improvised grenade the Molotov cocktail, which was named after the Soviet Union’s foreign minister.

Ultimately however, the sheer numerical superiority of the Soviet Union’s forces took its toll and Finland’s government was eventually forced to sign a peace agreement that forced them to give up around ten per cent of their territory.

Despite the defeat, Finland emerged with its sovereignty intact and its international reputation enhanced, whilst the Soviet Union was kicked out of the League of Nations and was condemned by other world leaders for the illegal invasion.

Finnish sniper Simo Häyhä emerged a hero after racking up the most sniper kills in the history of warfare.

Aged 33 when the war broke out, Häyhä quickly acquired a fearsome reputation, striking the enemy unseen and unheard from hidden positions up to 300 yards from his target.

Nicknamed The White Death, Häyhä was a prime target for the Soviets, who targeted him with mortars and heavy artillery to halt his killing spree, which once claimed 25 men in one day.

Finland then allied with Nazi Germany against the Soviets in what was known as the Continuation War in 1941, with Helsinki trying to retake its lost territories.

After a ceasefire was agreed in the Moscow Armistice in 1944, Finland was ordered to expel Nazi troops stationed in the country, prompting the Lapland War with Germany.

At the Paris Peace Treaty, Finland was classified as an ally with Nazi Germany and ordered to pay reparations.

The country then pursued a policy of neutrality, maintaining a free market economy and democracy despite enjoying a strong relationship with the Soviet Union.