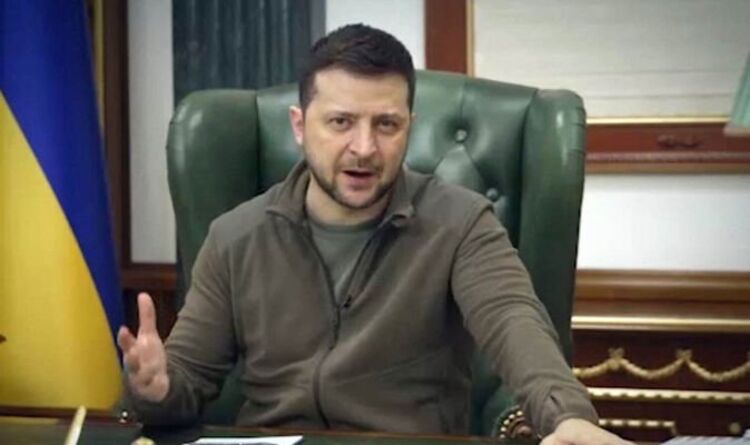 In an address to the nation in the early hours of yesterday: “Our delegation also worked on this in negotiations with the Russian party. Pretty good, as I was told. But let’s see. They will continue tomorrow.

“As before, the enemy is confused. They did not expect such resistance. They believed in their propaganda, which has been lying about us for decades. They still can’t recollect themselves. But they have already begun to understand that they will not achieve anything by war.

“Their soldiers know this. Their officers are aware of this. They flee the battlefield. They abandon equipment. We take trophies and use them to protect Ukraine. Today, Russian troops are, in fact, one of the suppliers of equipment to our army. They could not imagine such a thing in a nightmare.”

Mr Zelensky said a “delegation” from Ukraine held talks with “the Russian Party” – and that these were “pretty good, as I was told”. However, he sounded a note of caution, adding: “But let’s see. They will continue tomorrow”.

The Ukrainian President praised a Russian TV employee who interrupted a live broadcast to warn the Russian population ‘they’re lying to you’.

Marina Ovsyannikova, an editor at Channel One, burst on to the set of the live broadcast of the nightly news on Monday evening, shouting: “Stop the war. No to war.”

She also held a sign saying: “Don’t believe the propaganda. They’re lying to you here.” It was signed in English: “Russians against the war.”

Mr Zelensky said: “I am grateful to those Russians who do not stop trying to convey the truth. To those who fight disinformation and tell the truth, real facts to their friends and loved ones. And personally to the woman who entered the studio of Channel One with a poster against the war. To those who are not afraid to protest.

Of the Russian invaders, the Ukrainian President said: “They flee the battlefield. They abandon equipment. We take trophies and use them to protect Ukraine.”

The Ukrainian President also had a message for Russian army. He said that Ukraine was listening to their conversation. “We hear it all. We draw conclusions. We know who you are,” said the President.

“But why should you die? What for? I know that you want to survive. I offer you a choice. On behalf of the Ukrainian people, I give you a chance. Chance to survive. If you surrender to our forces, we will treat you the way people are supposed to be treated.”

In a separate address to European leaders yesterday, the Ukrainian leader said: “We have to acknowledge Russia as a rogue state and there has to be a trade embargo with Russia.

“This is something that we need and you need as well, just like the rest of the world, to make sure there is peace in Europe and Ukraine.”

He also repeated his frustration with NATO over its refusal to implement a no-fly zone over Ukraine as he addressed JEF leaders meeting Tuesday in London.