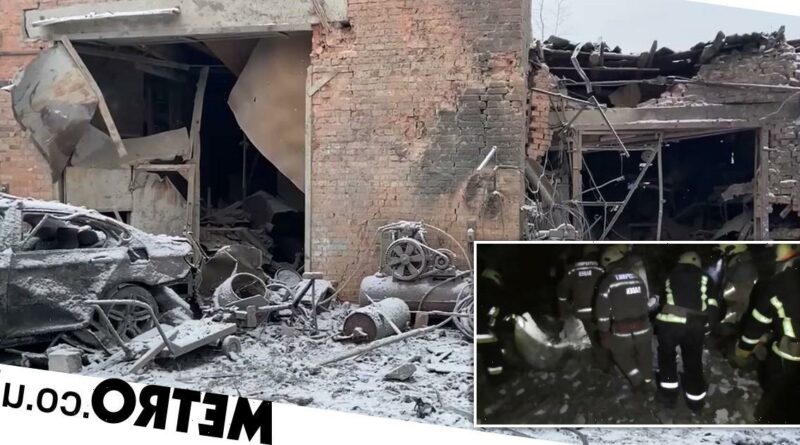 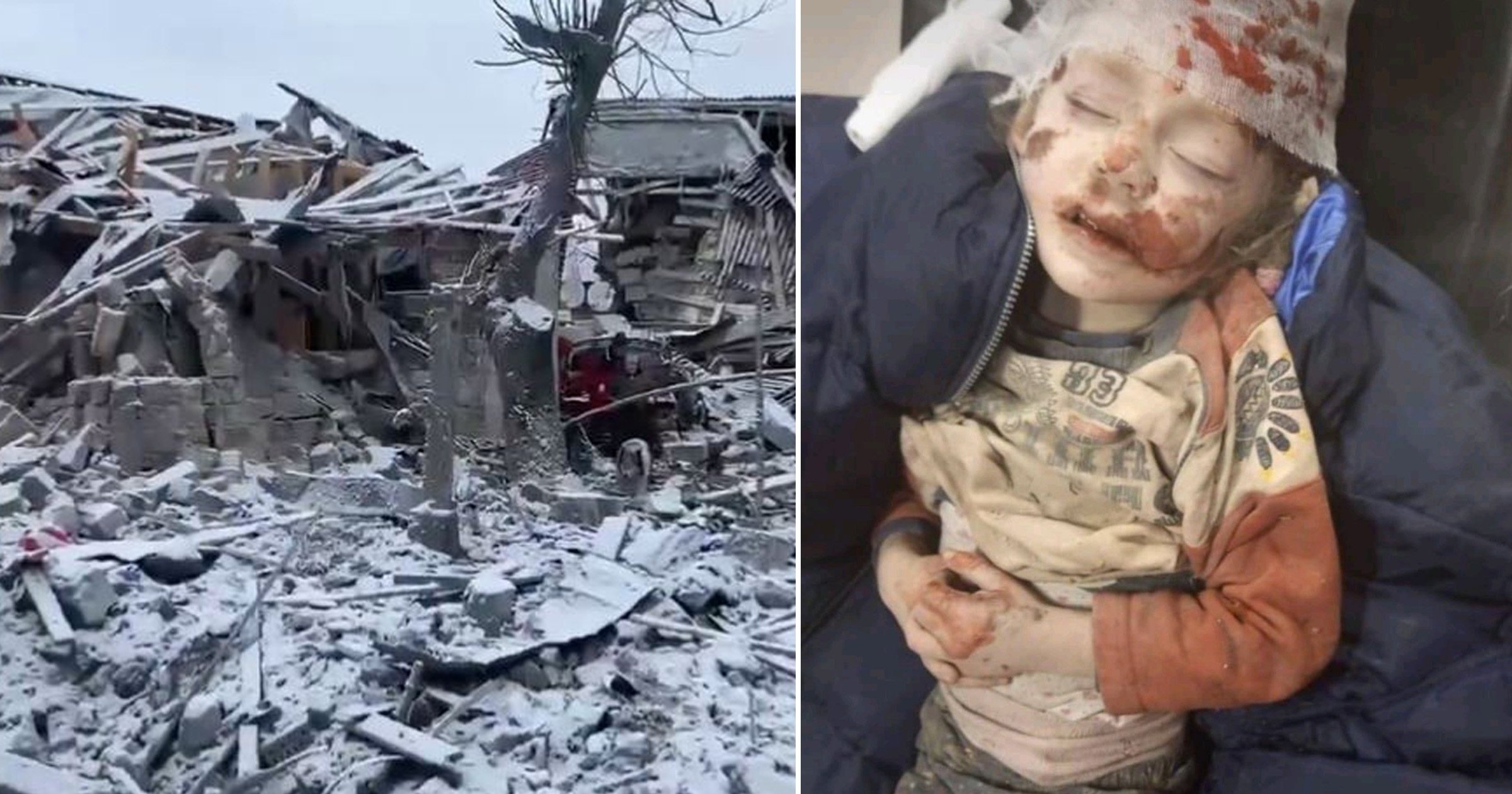 A residential area of Sumy has been reduced to rubble after Russian airstrikes which killed 18 people, including two children.

The city in north-eastern Ukraine has come under heavy shelling since Vladimir Putin’s invasion began 13 days ago.

The Russian leader has been accused of dropping 500-kilogram bombs on homes in two of its streets last night.

Adviser to the Interior Minister, Anton Gerashchenko, said that as a result of strikes on Romenska and Spartaka Streets, 18 civilians were killed.

‘The rubble is still being cleared. But the fact of the death of 18 civilians has already been established. Including two children,’ he said in a Telegram channel on Tuesday.

They said rescuers were sent in to clear up the destroyed structurers after Russia ‘ruthlessly struck the housing sector,’ in an ‘insidious attack’.

Images show the scale of devastation caused by the strikes, with homes completely flattened.

Footage shared by the Parliament of Ukraine also showed a blaze tearing through the wreckage, after the bombs caused residential buildings to catch fire.

A tweet from the official Verkhovna Rada of Ukraine account said: ‘Russian planes dropped bombs on #Sumy, #Ukraine, there are civilian casualties.

‘The bombs hit residential areas of the city. Houses houses of civilians were demolished and damaged. The Russian army also shelled #Okhtyrka. This is a targeted attack on civilians.’

Ukrainian authorities accused Russia of crimes against humanity as they shared graphic photos of the victims. They said Putin’s troops ‘dropped 500-kilogram bombs on residential buildings’ as they reiterated calls for a no-fly zone above Ukraine’s skies.

Nato has ruled out the measure amid fears of provoking a wider war in Europe. Ukraine’s President Volodymyr Zelensky is expected make a renewed plea for intervention when he addresses UK MPs in a historic video-link address to parliament later today.

Meanwhile at the Hague, Ukraine pleaded with the International Court of Justice to order a halt to Russia’s invasion, saying Moscow is committing widespread war crimes.

It comes as Russia says it is ready to reopen humanitarian corridors on Tuesday morning, with civilians due to be evacuated from Sumy on buses today.

But Ukrainian leaders are skeptical, after prior efforts to establish evacuation routes crumbled within minutes amid renewed attacks from Kremlin forces.

With the invasion well into its second week, Russian troops have made significant advances in southern Ukraine but stalled in some other regions.

Soldiers and volunteers fortified the capital, Kyiv, with hundreds of checkpoints and barricades designed to thwart a takeover.

Shells and rockets have continued to fall on other population centres, including the Kyiv suburb of Bucha, where the mayor reported heavy artillery fire.

‘We can’t even gather up the bodies because the shelling from heavy weapons doesn’t stop day or night,’ Mayor Anatol Fedoruk said.

‘Dogs are pulling apart the bodies on the city streets. It’s a nightmare.’

Earlier Moscow had proposed to evacuate Ukrainians into Russia, but this was rejected by Ukraine as a manipulation and propaganda that will put people’s life in danger.

Russia’s plan aimed to allow civilians to leave Kyiv, Mariupol, Kharkiv and Sumy, using routes toward Russia or its ally Belarus, which was a launchpad for the invasion.

Ukraine instead proposed eight routes allowing civilians to travel to western regions of the country where there is no shelling.

Evacuations are now underway in Sumy and Irpin, on the outskirts of Kyiv.

But elsewhere, in the encircled southern port of Mariupol, an estimated 200,000 people – nearly half the population – are hoping to flee.

The city is short on water, food and power, and mobile phone networks are down.

Hospitals in Mariupol are facing severe shortages of antibiotics and painkillers, and doctors have performed some emergency procedures without them.

People are being advised to stay in shelters as Red Cross officials waiting to hear when a corridor will be established.

Demands for effective passageways have surged amid intensifying shelling by Russian forces.

The steady bombardments, including in some of Ukraine’s most populated regions, have yielded a humanitarian crisis of diminishing food, water and medical supplies.

Russia-Ukraine war: Everything you need to know

Russia’s invasion of Ukraine is in its twelfth day, with the attacks beginning on February 24.

Since then, Ukraine has suffered widespread damages and loss of life amid Russia’s major bombing campaign.

More than 1.5 million people have fled Ukraine to neighbouring countries, with the hopes that many more could escape via the planned humanitarian corridors.

However, the evacuation was cancelled after Russian troops were accused of breaching ceasefire terms, with the UK government suggesting it was a cover up to allow troops to regroup.

Follow Metro.co.uk’s live blog for rolling coverage of conflict as it happens.