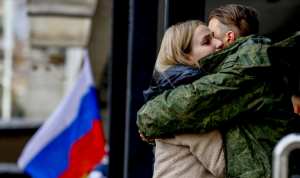 Mr Prystaiko discussed reports of newly conscripted soldiers calling the Ukrainian hotline provided to them in order to abscond from battle. Mr Prystaiko told broadcaster Julia Hartley-Brewer that newly enlisted Russian soldiers were too old and unfit for the war. Vladimir Putin conscripted 300,000 Russian men to join his illegal invasion of Ukraine, and there have been ongoing reports of many suffering from a lack of morale.

Ms Brewer said: “Has there been any effect yet, have they turned up? Is that going to change the fortunes of the war?”

Mr Prystaiko told Talk TV: “They have not arrived in numbers yet, I guess they’re just coming through the training courses very fast.

“Which will allow them to understand which side of the Kalashnikov the bullets are coming out, most of these people are not young per se.

“Some of them are extremely too old and unfit for the service and unmotivated.

“And we have a couple of hundred of them already, it’s not thousands yet, but hundreds.

“Some of them were to get to Ukrainian captivity, they would call the special hotlines which we established to tell people you still can survive.

Putin has been scrambling to regain lost territories in Ukraine by bringing in new men to fight in his illegal invasion.

Leaked reports of one of his allies recruiting Russian prisoners circulated last month, they have been promised that if they fight for up to six months, they will be set free.

Some Russian men fled the country when the call went out for new recruits to join the frontlines of battle in Ukraine as they did not want to be used as cannon fodder.

New reports have shown that up to 63,000 soldiers have been killed since the onslaught began in February.

A Chatham House research fellow uttered a similar sentiment to Mr Prystaiko and claimed that Russian soldiers were losing morale.

Ms Lutsevych explained to Times Radio: “They just run for their lives, and this is something that is important to understand, it also coincides with this mobilisation in Russia where clearly Russians have this footage, they understand there’s a problem on the frontline.