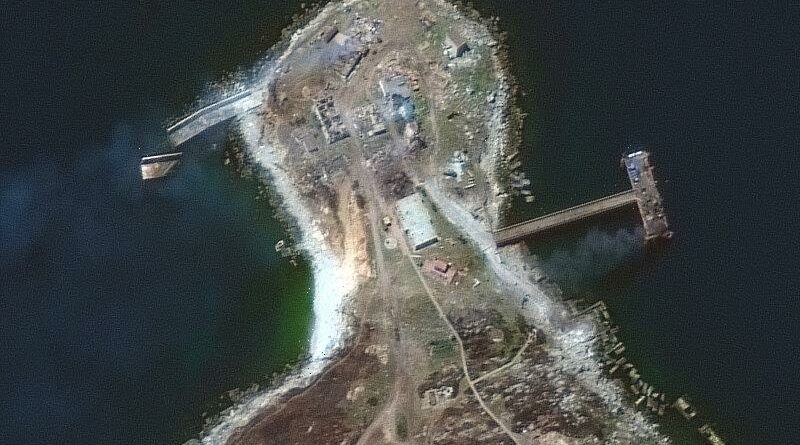 Sloviansk: Russian forces withdrew from a strategic Black Sea island on Thursday (AEST), potentially easing the threat to the vital Ukrainian port city of Odesa, but kept up their push to encircle the last stronghold of resistance in the eastern province of Luhansk.

The Kremlin portrayed the pullout from Snake Island as a “goodwill gesture”. But Ukraine’s military claimed it had forced the Russians to flee in two small speedboats following a barrage of Ukrainian artillery and missile strikes. The exact number of troops was not disclosed. 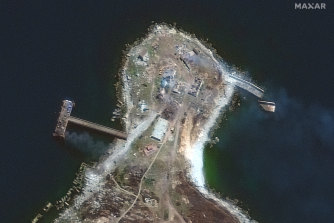 This image shows a burning pier and buildings on the northern end of Snake Island, in the Black Sea, on Thursday.Credit:Maxar Technologies via AP

“Unable to withstand the impact of our artillery, missile and aviation units, the Russian occupiers have left Snake Island. The Odesa region is completely liberated,” the General Staff of the Armed Forces of Ukraine said in its regular social media update.

A senior Ukrainian military official, Oleksiy Gromov, earlier said Kyiv was planning to deploy troops to Snake Island, but did not specify a timeline.

“At the moment, we control [the island] with the help of our weapons: long-range artillery, rocket units and aviation,” Gromov said.

Ukraine and the West have accused Russia of blockading Ukrainian ports to prevent exports of grain, contributing to a global food crisis. Russia has denied that and said Ukraine needs to remove mines from the Black Sea to allow safe navigation.

Turkey has sought to broker a deal to unblock grain exports. But the talks have dragged on, with Kyiv expressing fear that Russia will exploit the removal of the mines to attack Odesa.

Snake Island sits along a busy shipping lane. Russia took control of it in the opening days of the war in the apparent hope of using it as a staging ground for an assault on Odesa.

It was unclear if the evacuation meant a change in Moscow’s designs on Ukraine’s biggest port, which is crucial for shipping grain to Africa, the Middle East and other parts of the world. It’s also the headquarters of the country’s navy. 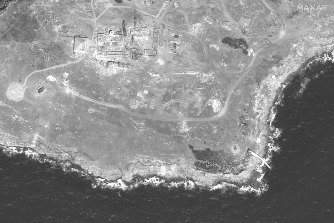 This WorldView-1 satellite black and white image shows the southern end of Snake Island with a destroyed tower and burned vegetation in several locations.Credit:Maxar Technologies via AP

The island — shrouded in myth since ancient times — early on took on legendary significance for Ukraine’s resistance to the Russian invasion, when Ukrainian troops there reportedly received a demand from a Russian warship to surrender or be bombed. The answer supposedly came back, “Go [expletive] yourself.”

Ukraine has celebrated the story with patriotic fervour, issuing a postage stamp in commemoration.

The island’s Ukrainian defenders were captured by the Russians but later freed as part of a prisoner exchange. After the island was taken, the Ukrainian military heavily bombarded the small Russian garrison there and its air defences.

At a NATO summit in Madrid, British Prime Minister Boris Johnson billed the Russian pullout as a sign that Ukraine will prevail in the war launched by Russian President Vladimir Putin. “In the end it will prove impossible for Putin to hold down a country that will not accept” occupation, Johnson said.

Meanwhile, Moscow kept up its push to take control of the entire Donbas region in eastern Ukraine. It is focused on the city of Lysychansk, the last remaining Ukrainian stronghold in Luhansk province.

Russian troops and their separatist allies control 95 per cent of Luhansk and about half of Donetsk, the two provinces that make up the mostly Russian-speaking Donbas.

Ukraine said the Russians were shelling Lysychansk and clashing with Ukrainian defenders around an oil refinery on its edges.

Luhansk Governor Serhiy Haidai said Russian reconnaissance units trying to enter Lysychansk on Wednesday were repelled. He said the Russians were trying to block a highway used to deliver supplies, and fully encircle the city.

“The Russians have thrown practically all their forces to seize the city,” Haidai said, but denied that Lysychansk had been encircled.

Nevertheless, Haidai noted that as of Thursday evening, evacuations from the city were impossible due to heavy shelling and mined access roads. Earlier, a representative of the Ukrainian military said it was not planning a retreat from Lysychansk.