Moscow: Russian authorities ramped up the pressure on top Kremlin critic Alexei Navalny by levelling new fraud accusations against him.

The Investigative Committee, Russia's main investigative agency, said on Tuesday, local time, it has opened a new criminal case against Navalny on charges of large-scale fraud related to his alleged mishandling of some $US5 million ($6.5 million) in private donations to his Anti-Corruption Foundation and other organisations. 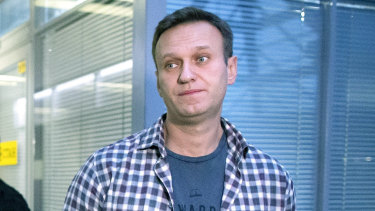 Navalny, who is convalescing in Germany after an August poisoning with a nerve agent that he blamed on the Kremlin, ridiculed the new accusations as a sign of Russian President Vladimir Putin’s agitation.

Navalny fell sick on August 20 during a domestic flight in Russia and two days later was flown still in a coma for treatment to Berlin, where he spent weeks in intensive care. Labs in Germany, France and Sweden, and tests by the Organisation for the Prohibition of Chemical Weapons, established that he was exposed to a Soviet-era Novichok nerve agent.

Navalny has accused Putin of ordering his poisoning. The Kremlin has repeatedly denied the accusation. 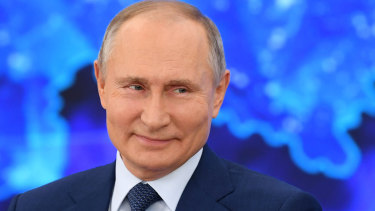 “They are trying to put me behind bars for failing to die and continuing to hunt for my killers and for proving that Putin was behind it,” Navalny tweeted.

News of the investigation involving Navalny came a day after the country's prison agency accused him of violating the conditions of his suspended sentence in a previous case and gave him one day to report to its office. In the decade since he started writing about official corruption in Russia and moved into running for political office, Navalny, 44, has been arrested repeatedly and faced various charges.

The Federal Penitentiary Service pointed at an article by doctors from Berlin’s Charite hospital that was published in medical journal The Lancet and indicated that Navalny has fully recuperated. It ordered Navalny to visit its office in line with the terms of a 3 1/2-year suspended sentence he received for a 2014 conviction or face a real jail term if he misses Tuesday's deadline.

Navalny, who previously said that he planned to return to Russia once he fully recovered, scoffed at the demand, saying that the Federal Penitentiary Service’s reference to the article in The Lancet amounted to the government accepting he was poisoned.

Russian authorities have insisted that doctors who treated Navalny in Siberia before he was airlifted to Germany found no trace of poison and have challenged German officials to provide proof of his poisoning. They refused to open a full-fledged criminal inquiry, citing the lack of evidence that Navalny was poisoned.

The European Union imposed sanctions on six Russian officials and a state research institute after tests by the Organisation for the Prohibition of Chemical Weapons concluded that Navalny had been exposed to Novichok. Russia has hit back with its own sanctions against EU officials.