A 12-year-old schoolboy was arrested and taken away by police officers during an anti-Putin rally in southwestern Russia on Saturday.

Egor Pryanishnikov addressed the crowd of demonstrators in the city of Saratov, to vent his anger at the poor state of the roads where he lives.

Afterwards, cops pulled him out of the crowd, pinned his arms behind him, forced him into a car and drove him to the police station. 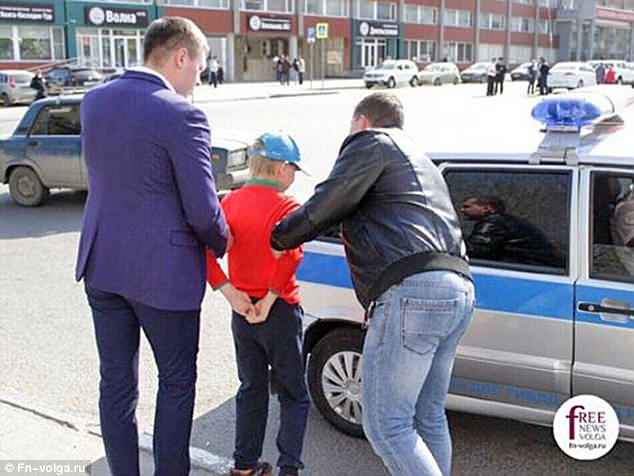 Arrest: Egor Pryanishnikov, 12, was arrested and taken away by police officers in Saratov, southwestern Russia, after making a speech at an anti-Putin demonstration

Protesters angrily shouted ‘shame’ at the officers as the shocking scene unfolded.

The youngster was later released to his father and left the station crying.

Earlier that day he told Free News Volga: ‘Why should I be afraid?’ To go [to rallies] is the legal right of every person.’

A lawyer sent to the police station by protesters said that the boy was taken away because cops said the demonstrators were ‘Nazis and potential extremists’ and the child was ‘intimidated’.

They also said that he was a minor walking alone without supervision. Government critic: The 12-year-old had addressed the crowd of anti-Kremlin demonstrators to vent his anger at the poor state of the roads where he lives 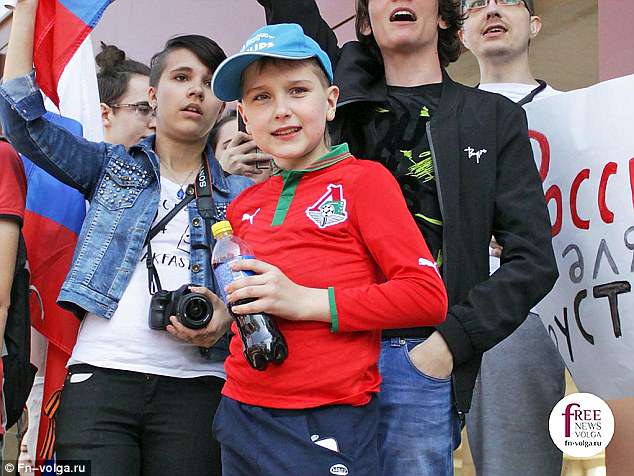 Politically active: The 12-year-old is seen among protesters at the rally on Saturday ‘He is not my Tsar’: Thousands took part in anti-Putin protests across Russia  on Saturday, of which more than 1,500 were arrested

He added: ‘This is the standard reason for police detaining minors who participate in rallies.’

This weekend dozens of cities throughout Russia saw protesters take to the streets to show their anger at Vladimir Putin’s fourth presidential term.

The ‘He Is Not My Tsar’ demonstrations, protesting Putin’s inauguration today, were organised by supporters of opposition leader Alexei Navalny.

OVD-Info, an organization that monitors Russian political arrests, said at least 1,575 people, including Navalny, were arrested in demonstrations in 26 cities across Russia.

It was not clear how many remain in custody, although the presidential human rights council said about 80 percent of 658 detainees in Moscow had been released.

Vladimir Putin was today inaugurated for a fourth term as Russian president in the Hall of the Order of St Andrew of the Grand Kremlin Palace in Moscow.