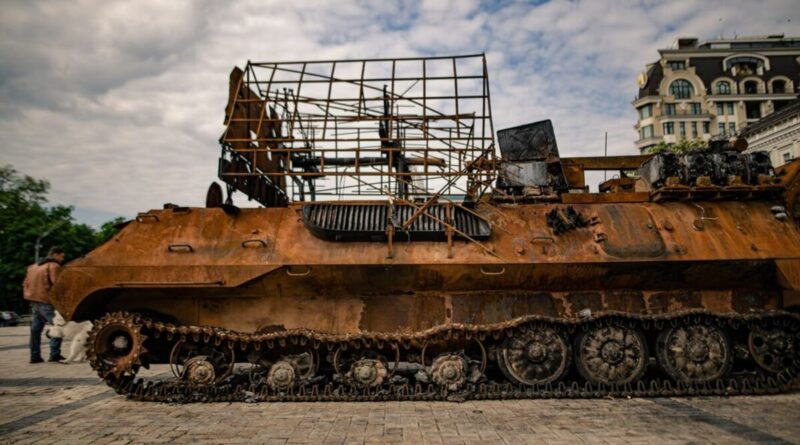 A study by the Royal United Services Institute, a British think tank, found that Russian soldiers were left unable to communicate among themselves just mere days into their attack on Ukraine. The Russian army successfully interfered with the Ukrainian air-defence radars and communications links in the first five days of the invasion in February.

But according to the RUSI report, Russia’s electronic warfare was so potent that it also interfered with its own communication links, leaving soldiers unable to properly communicate with themselves.

The report found that the electronic attacks “became a greater threat to the Russian operation than Ukrainian [surface-to-air missile] systems, so their electronic warfare assets began to greatly scale back their operations after the first two days”.

It added: “During the first week of the invasion, Russian electronic warfare using jamming equipment and E-96M aerial decoys were highly effective in disrupting.

“This allowed newly relocated Ukrainian SAM systems to regain much of their effectiveness, although it took time to repair or adapt to much of the damage to key radar systems for early warning and long-range missile guidance.”

“In the first week of March, however, Ukrainian SAMs began to inflict significant losses on Russian attack sorties,” the report continued.

Despite its relentless attacks on Ukraine, Russia has suffered substantial defeats since the beginning of the war.

The Kremlin raised the stakes in the conflict by declaring a partial mobilisation of up to 300,000 reservists in September, but the Russian President continues to face resistance from his own citizens.

The UK Ministry of Defence (MoD) warned over the weekend that Russian forces in Ukraine are “covering up” their humiliating loss in the city of Kherson and other parts of Ukraine. Inexperienced recruits are being put in charge of units that have suddenly found themselves without a commander in chief, the MoD has said.

In an update on the war on Sunday morning, the MoD wrote: “Russia’s recent withdrawal from west of Kherson was conducted in relatively good order compared to previous major Russian retreats during the war.

“During the retreat, vehicle losses were likely in the tens rather than hundreds, while much kit that was left behind was successfully destroyed by Russian forces to deny it to Ukraine.

“This relative success is likely partially due to a more effective, single operational command under General Sergei Surovikin. However, the force remains riven by poor junior and mid-level leadership and cover-up culture.

“For example, in recent months two companies subordinate to the Eastern Military District fled after their commander was killed. Other officers likely lied in an attempt to cover up the incident.”

He wrote: “20 mobilised men allegedly escaped from a military training center, one of them has a cancer diagnosis. However, all 20 were caught and returned so they can fulfil their mission to die in Ukraine.”