Russia’s coronavirus crisis continues to worsen with a record 7,922 cases the day after PM tested positive as the country converts shopping malls and sport complexes into hospitals

Russia’s coronavirus crisis continues to worsen with a record 7,922 cases recorded the day after Prime Minister Mikhail Mishtushin tested positive for the disease.

Meanwhile, Moscow is rushing to turn shopping malls and sports complexes into emergency hospitals amid fears of an imminent major surge in coronavirus cases.

Despite a huge effort to provide more beds, the city’s mayor Sergei Sobyanin has admitted he fears the healthcare system being overrun.

And he pleaded with residents not to stay in home self-isolation for too long before seeking help because they were putting their lives at risk.

‘One shouldn’t self-medicate,’ he said. 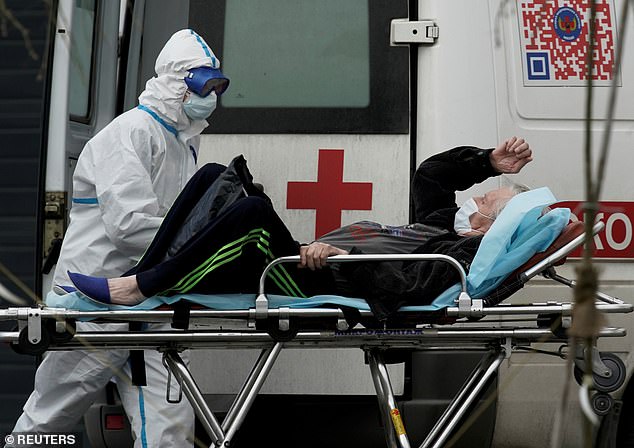 A medical specialist wearing protective gear transports a man on a stretcher outside a hospital for patients infected with the coronavirus disease (COVID-19) on the outskirts of Moscow, Russia on Wednesday 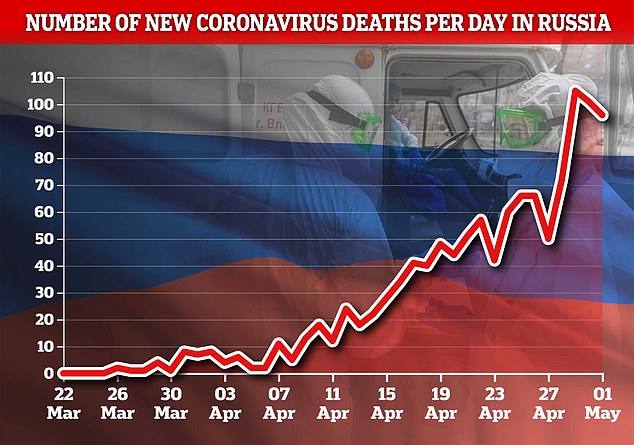 ‘I simply ask everyone not to self-medicate because two-thirds of our deaths today are people who were self-medicating and led themselves to gravest condition and then made it to intensive care.’

Paired with a lack of beds for the sick, a number of refrigerated morgues have begun popping up across the country.

One such container was photographed outside city hospital no.2 in St Petersburg hospital, according to Fontanka news agency.

Another eight similar containers have been spotted across the country.

This comes as Russian prime minister Mikhail Mishtushin, 54, is in coronavirus hospital with a high fever and cough.

An unknown number of Russian officials in contact with him have been forced into quarantine as the crisis is becoming more serious by the day.

The total number of active cases is now 100,042 with another 211,191 under medical observation suspected of suffering from Covid-19. 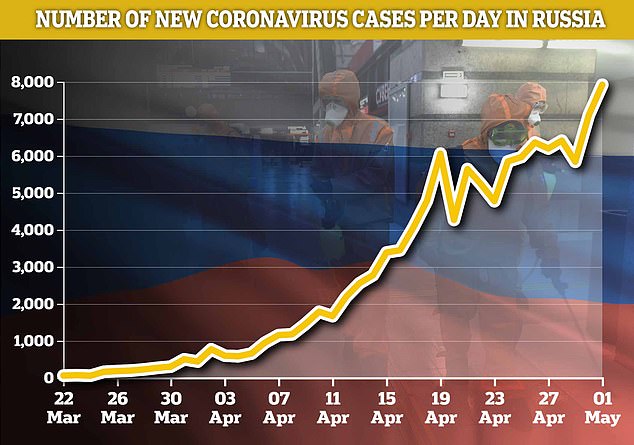 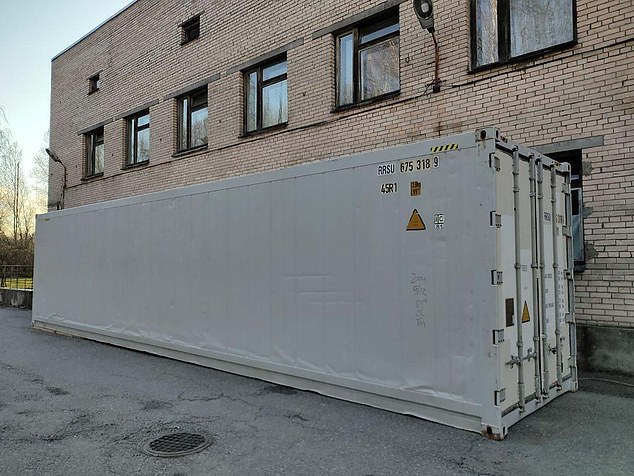 But Moscow alone was hit by 3,561 new cases leading to serious concern over how the city will cope.

Despite plans for 27,000 coronavirus beds, the mayor has warned Moscow maybe short of needs.

‘If the dynamics do not reduce, we must be ready to provide with medical aid as many sick people as possible,’ he said. 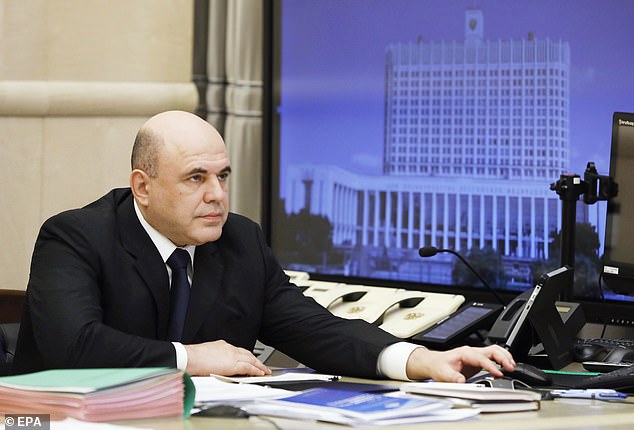 ‘We decided that we are picking up premises at large outdoors sport complexes, at VDNKh [the All-Russian Exhibition Centre], and at shopping malls in order to deploy temporary hospitals.’

This was a ‘complicated task’ and ‘we are doing that in line with the situation expected within the next two, three and four weeks’.

These emergency measures would add 3,000 more beds as he sought to avoid a nightmare where hospitals ‘just cannot cope with the flow of patients’, he said.

But he warned of a ‘big hard trial’ ahead and said Moscow has not reached its peak.

This came as ambulances sounded their sirens in an extraordinary salute a respected doctor who died at Star City – where all cosmonauts and astronauts are trained for the International Space Station – as her coffin was taken for her funeral. 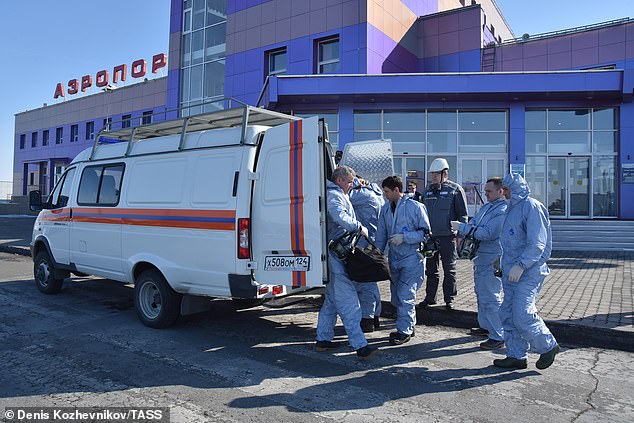 Employees of the Norilsk Nickel’s Polar Division gas safety service at Norilsk Airport today. The response team has carried out a disinfection of the airport’s facilities to prevent the spread of the novel coronavirus

Dr Natalya Lebedeva, 48, pictured here for the first time – plunged 60ft to her death from the sixth floor of a Moscow hospital after colleagues said she was unfairly blamed for the spread of coronavirus.

She had become infected from Covid-19.

Friends say the respected and dedicated doctor had argued with her bosses to obtain tests and PPE for frontline staff.

‘She realised that her department was not equipped properly with PPE, but they had to fulfil their tasks,’ said a friend.

‘Of course every person was scared to work in such conditions, and she was too…but she could not leave her team.’

They say she was threatened with legal action over the outbreak which included her boss Dr Olga Minina, at Medical-Sanitary Unit No 2 in Star City, which is closed to all unauthorised outsiders.

He is directly responsible for all cosmonauts and US astronauts travelling to the International Space Station.

An unprecedented halt to cosmonaut training has been instituted until 12 May, says a source.

An investigation into her death is underway.