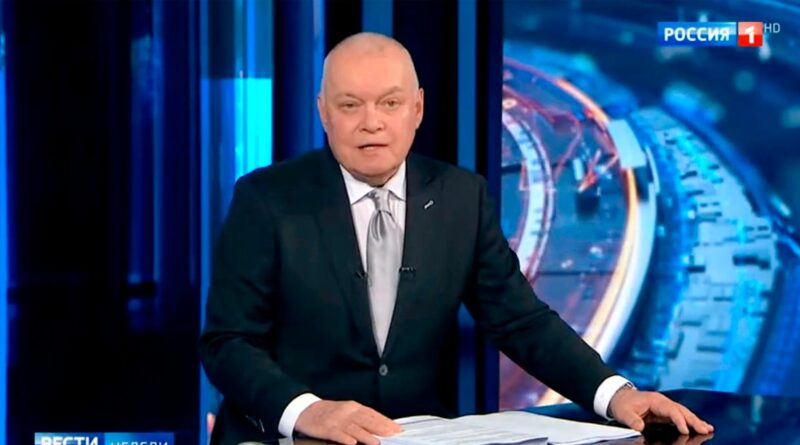 A Russian news anchor dubbed Vladimir Putin's "propagandist-in-chief" has warned the West that their nuclear weapons are powerful enough to wipe out all NATO countries.

Dmitry Kiselyov, a presenter for state media Rossiya 1, has a reputation for extravagant tirades demonising the West, recently threatening the Western world on TV by boasting Russia's military might.

He said yesterday (February 27): "Our submarines can shoot more than 500 nuclear warheads. This would guarantee destruction of the USA, and all other NATO countries.

"In accordance with the principle: ‘Why do we need the world, if Russia isn’t there?'

"The Russian nuclear potential is the strongest in the world .

"Today our Russian Nuclear Triad is on the high alert.

"Putin did warn [the West]. Do not try to scare Russia."

In his Vesti Nedeli (News of the Week) show on state-run Rossiya 1 channel, he also blamed UK foreign secretary Liz Truss for seeking to "intimidate" Russia.

Putin made the decision of "utmost importance" to put his nuclear forces on alert as the West imposed what were "illegitimate" sanctions and NATO issued "aggressive statements", he said.

He chided Truss for reportedly saying a conflict between Russia and NATO could emerge from the crescent Ukrainian crisis.

"A conflict between Russia and NATO over Ukraine – nothing like this has been said before,” he said.

But Russia’s nuclear capability with new-age “superweapons” like “hypersonic Tsirkon” were more than a match for the West’s capability, he said.

The foreign secretary has compiled a “hit list” of Russian oligarchs who will face sanctions over the coming weeks.

"There will be nowhere to hide."