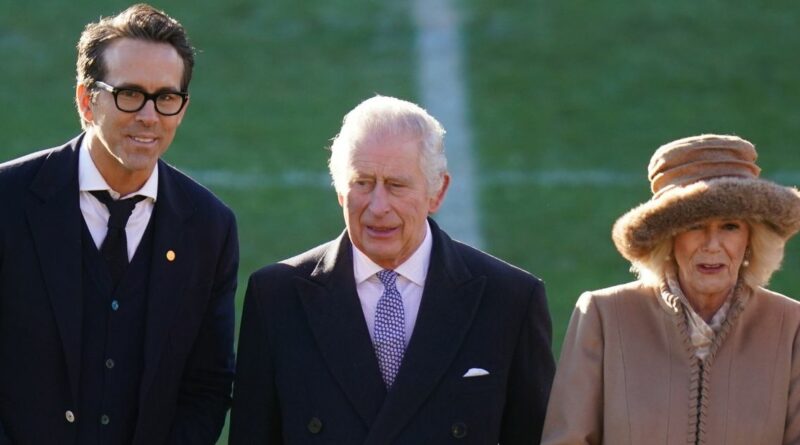 The royals were visiting the Racecourse Ground in Wales to learn about Reynolds and McElhenney’s redevelopment of the club following their takeover in February 2021.

The King did not comment on Prince Harry and Meghan Markle’s Netflix docuseries, the first three episodes of which were released yesterday, but the actors did.

Speaking to the media, It’s Always Sunny in Philadelphia star McElhenney revealed the owners “had never heard of it.”

Deadpool actor Reynolds quipped that the pair had had etiquette lessons ahead of the visit.

“Rob and I both said early on, and this holds true and for the rest of our lives, we will do anything to uplift and elevate this community and this club and having the King pay a visit is certainly one way to do it. That’s for sure. Very excited.”

The King and Camilla were seen on the pitch laughing alongside the actors and the Wrexham squad, who have powered the team into second place in the National League.

The Red Dragons are eyeing a return to the Football League for the first time since 2008.

The King was heard wishing players luck for their upcoming game tomorrow, while Camilla said to one: “It’s an extraordinary story.”

He also joked to head groundsman Paul Chaloner: “It is proper grass isn’t it, not that plastic stuff?”

The King and Camilla went on to meet club shop workers, the administration team, coaches and medical staff before watching football demonstrations from the women and youth teams.

Kerry Evans, the disabled liaison officer for Wrexham, also got to meet the royal couple. She told reporters: “It’s very, very special, what an honour.

“The King and Camilla both said it’s absolutely amazing the work we’ve been doing here.

“I never thought we’d have royalty at the club, now we’ve had Hollywood royalty and real royalty!”