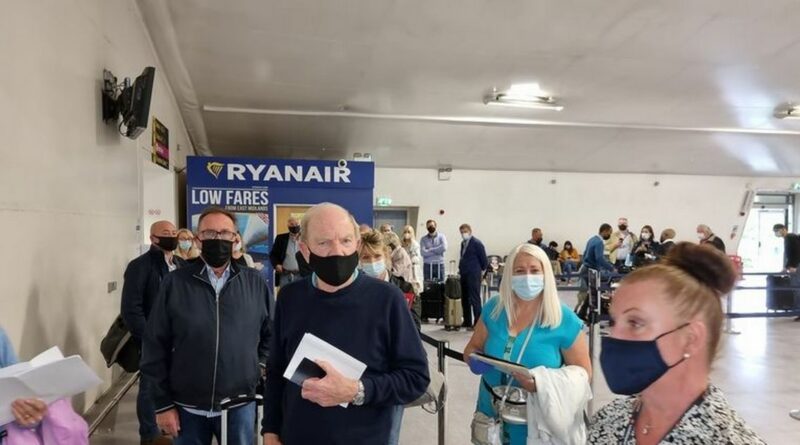 Ryanair passengers are furious after dozens were turned away from a flight to Spain at a British airport.

More than 30 people were told they could not go on their pre-booked flight to Malaga as they had no proof of Spanish residency.

It was required by the Spanish government for people to travel to the country at the time.

One said he was furious with the decision and claimed the unexpected refusal cost him almost £350.

He added that he doesn't expect to get back – and has hit out at Ryanair for not making the instructions clear.

The incident happened on Friday morning before the rules for travelling to Spain changed on Monday.

The passenger told the Derby Telegraph that he followed all of Ryanair's instructions on their website and claims he had valid Covid-19 vaccination certificates.

He also claimed he had validated QR Codes from Spain Travel Health for him to go on an essential business trip, as he owns property in the country and had to deal with a number of ongoing issues.

However, he claims Ryanair did not state on their website the need for either a Spanish residency permit or a letter from the UK Government saying the trip was essential.

The man, from Derby, who did not wish to be named, said: "When I arrived at the airport I was asked to go to the Ryanair gate to have my documents checked. I did not expect any issue as I had been very thorough in obtaining all the documents they required.

"I was met by a woman who informed people they would not be travelling unless they had a Spanish passport, proof of an application for residency or a letter from the UK Government saying the trip was essential.

"This led to anger, aggression and tears and three police officers had to oversee discussions. It was a truly shameful situation that caused great distress and large financial losses to some people.

"How we can have a validated form from the Spanish Travel Health government site allowing our entry and then be told this isn't sufficient? This was distressing for many people.

"Ryanair has all customers' email addresses and telephone numbers so they could have contacted all passengers 24 hours prior to travelling, so this really is shameful and I hope it doesn't happen to other UK travellers in the future."

Previously anyone travelling to Spain had to present evidence of Spanish residency at the airport check-in.

This was a requirement of the Spanish authorities. Without a residency permit, airlines could not allow passengers to board.

This is now no longer a requirement as Spain has opened its borders to visitors from countries that have low infection rates, including Britain.

Ryanair has been contacted for comment by the Daily Star.

A spokesman for East Midlands Airport said: "On Friday, May 21, 31 passengers were refused boarding onto a flight to Malaga for not having a Spanish residency permit.

"The decision, taken by the airline’s handling agent, was in line with the requirements of the Spanish authorities at the time.

“We encourage anyone planning to travel overseas to familiarise themselves with what is required of both the destination country and the UK’s regulations prior to booking flights."