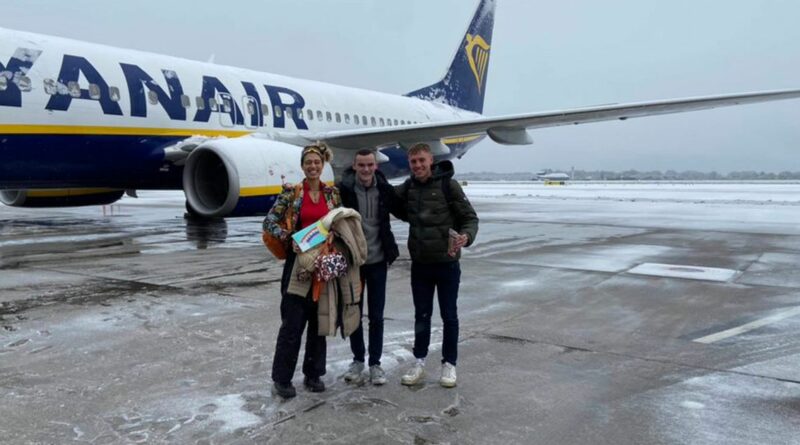 Manchester airport closed both of its runways yesterday due to snowfall, leaving flights cancelled and passengers trapped on planes for hours.

One Ryanair passenger was forced to wait 10 hours for a refund after his flight was cancelled due to the heavy snowfall.

Several disgruntled passengers took to Twitter to rant about the travel chaos – including Daniel Jones, a student from Ormskirk, Lancashire.

The 22-year-old arrived at the airport at 5am on Saturday for his 7.55 am flight to Oslo, Norway.

He claims he was only told the flight was cancelled due to weather conditions one minute before departure (at 7.54 am).

Ten hours later Daniel was still queuing at the airport waiting for a refund on his cancelled ticket.

He said: “We were told they’ve blocked the runway so won’t be leaving for another two hours at least.

“They said we’ll get you to where you’re going, yours is going ahead … then at about 12 they started announcing flights were cancelled.

“Now here we are in this queue – they’ve got two people on the desk and there’s probably over 100 people waiting.”

Daniel said the Ryanair flight only cost him £15. The front desk told him to apply for a refund online for the cost of his flights and his accommodation.

He slammed the airport, stating they should have been better prepared for the weather conditions.

“The weather didn’t seem that extreme, we were flying to Oslo where it’s much colder and I’m guessing flights are still going there,” he said.

“I don’t know what the situation is with Ryanair, I hope we get a refund but there is no option for an alternative flight.”

A Manchester Airport spokesperson said: “In anticipation of adverse weather forecast for this weekend, snow-clearing teams have been on site since Friday.

“Both runways were fully cleared and treated ahead of this morning’s first scheduled flight.

“Health and safety is our top priority and when snow on the airfield reaches a particular depth, it must be cleared before operations can continue.

“Once this morning’s flying programme was underway, there was a fresh period of heavy snowfall, which required further clearing to take place.

“The decision was therefore made to temporarily close airfield operations from 07.45 to 11.30 whilst clearing could take place to return to safe levels.

“We apologise to all affected passengers for any inconvenience and thank them for their patience.”

Ryanair said in a statement: “Due to snowy weather conditions in the UK, we are experiencing a small number of delays/cancellations to our flights from Liverpool and Manchester Airports today.

“While our teams are working hard to minimise disruption to customers, Ryanair advises all customers flying from the UK today to check the Ryanair website/app for flight status updates before travelling to the airport.

“We sincerely apologise for these weather-related disruptions which are entirely beyond our control.”