Will Javid kill off the plan for a customs union? New Home Secretary urged to block a Government ‘fudge’ on Brexit ahead of crucial showdown

Sajid Javid was under pressure to prove his Eurosceptic credentials last night by helping to block a Government ‘fudge’ on Britain’s exit from the EU’s customs union.

Mr Javid backed Remain at the 2016 referendum, but friends say privately he is a lifelong Eurosceptic. Since Miss Rudd was a Remainer he could tip the balance on the 11-strong Cabinet committee that sets Brexit policy.

A Whitehall source said Mr Javid’s interventions at meetings of the full Cabinet had become ‘much more Brexit-y’ in recent months. 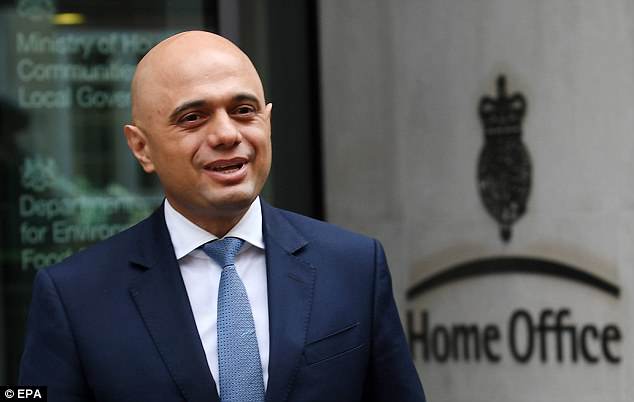 Last year he confronted Chancellor Philip Hammond over the need to release billions of pounds to prepare for the possibility of leaving the EU without a deal.

A leading figure on the influential European Research Group of Tory MPs described Mr Javid as ‘one of us’.

The source told the Mail: ‘It will help having Sajid in these meetings in the long term – it’s basically another member of the Brexit war cabinet for us. He was bullied into backing Remain, but anyone who knows him knows where his heart lies.’

Former Brexit minister David Jones described the partnership proposal, which would see the UK collect EU tariffs on behalf of Brussels, as unworkable.

Mr Jones said: ‘We want this idea buried as soon as possible and I would encourage all members of the Cabinet to see it for what it is.

‘It would require us to still have alignment on regulations with the EU and it would make us subject to the European Court of Justice. 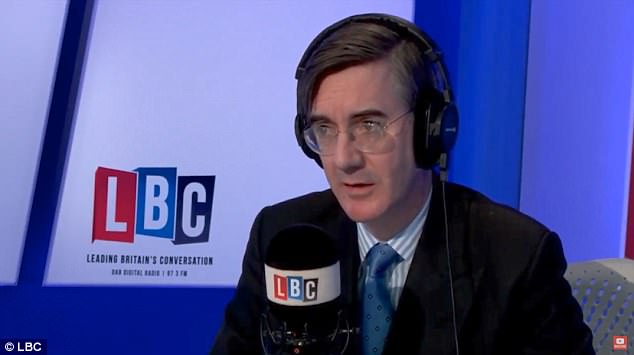 Jacob Rees-Mogg, chairman of the ERG group, also urged ministers to abandon the customs plans he has previously described as ‘cretinous’

When is the meeting about the customs union?

The PM’s 11-strong Brexit ‘war cabinet’ meets tomorrow to debate which of two plans for future customs arrangements with the EU Britain should pursue. Mrs May wants the package to resolve the issue of moving goods seamlessly, particularly across the Irish border, while also leaving the UK free to strike new trade deals after Brexit.

Who is discussing it?

How does the reshuffle affect the decision?

Technically, both Mr Javid and Miss Rudd were members of Remain. But while Miss Rudd is a diehard Remainer, who questioned whether the UK would leave the customs union, friends of Mr Javid say he has fully embraced Brexit – potentially tipping the balance of the group in favour of the Eurosceptics.

What do Remainers want?

Pro-Remain ministers are backing a complex plan drawn up by Mrs May’s chief Brexit adviser Olly Robbins for a ‘customs partnership’ with the EU, which would require officials to track the final destination of all goods entering the UK and hand over relevant tariffs to Brussels on goods ending up in the EU. It would also require significant alignment with EU regulations in some sectors. Brussels has questioned whether the plan is technologically possible.

What do Brexiteers want?

Eurosceptic ministers are said to be ‘instinctively opposed’ to the ‘customs partnership’ proposal, fearing it would lead to the UK staying in the customs union by the back door. They favour a looser ‘maximum facilitation’ which would use technology to streamline customs controls, particularly at the Irish border. The EU has raised doubts that controls could ever be seamless enough to prevent the need for a ‘hard border’ in Ireland.

What is Theresa May likely to go for?

Whitehall sources say the customs partnership is her ‘preferred option’. But she is under pressure to back down. Mr Davis is said to have threatened to quit, while some MPs privately warn the PM could face a leadership challenge unless she opts for a clean break with Brussels.

‘Were it to go ahead there would be a great deal of unhappiness, not just among Conservative MPs but among the public who voted to leave.’

Jacob Rees-Mogg, chairman of the ERG group, also urged ministers to abandon the customs plans he has previously described as ‘cretinous’, saying: ‘I don’t think a customs partnership is going to help.

‘The customs plan has so many logical inconsistencies, I don’t think it will survive much further.’

Some Tory MPs are warning privately that Mrs May could face a leadership challenge unless she ditches the idea. One former minister said: ‘We have been putting up with a lot – on the divorce bill, on the transition period and so on. I think this would be the final straw as it would mean us effectively remaining in the EU.

‘I don’t think you would necessarily see an organised push to get rid of the PM, but people would just lose confidence. You could easily see a leadership ballot triggered.’

Mr Javid has warned that staying in the customs union would be a betrayal of the referendum result. At the weekend he said: ‘If you want to take the main message that resonated with those that voted Leave it has to be “take back control”. You won’t be taking back control if you leave the EU and stay in the customs union.’ During the referendum campaign, the then-business secretary appeared one of the most reluctant Remainers, saying he ‘would not shed a tear’ if Britain left the EU.

The Brexit war cabinet is finely balanced on the issue of future customs arrangements with the EU. A Whitehall source said Eurosceptic ministers, including David Davis, Boris Johnson, Liam Fox and Michael Gove were ‘instinctively opposed’ to the proposal for a partnership.

Defence secretary Gavin Williamson is also said to be opposed.

They are pushing Mrs May to back an alternative proposal to use technology to remove the need for most customs checks, particularly on the Irish border.

Against them, Mr Hammond, business secretary Greg Clark, Northern Ireland Secretary Karen Bradley and Mrs May’s deputy David Lidington are all in favour of the new customs partnership, which supporters claim would solve the Irish border problem at a stroke.

Miss Rudd, a leading light in the Remain campaign, was also in favour of the proposal. Mrs May has not indicated publicly whether she backs the idea, but one ally privately described it as being ‘intellectually perfect’.

Tomorrow’s meeting is expected to discuss the rival proposals, although sources said they did not expect a final decision to emerge.