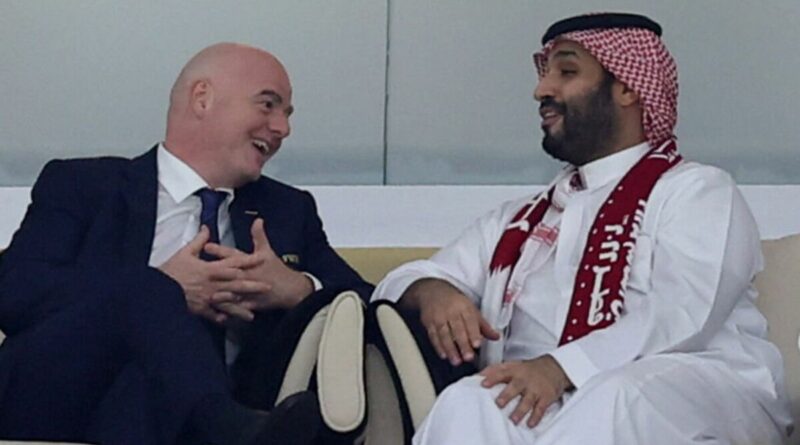 Saudi Arabia has beheaded 15 people in less than a fortnight, a human rights organisation has said. Saudi Prime Minister Crown Prince Mohammed bin Salman was yesterday pictured smiling and joking with FIFA President Gianni Infantino at the opening ceremony of the 2022 World Cup in neighbouring Qatar.

But Reprieve said back home, his country was on track for a record year of public executions, despite Mr bin Salman – who is the son of King Salman and for all intents and purposes the country’s leader – previously vowing to reduce their number.

The defendants, all of whom were men, were sentenced to death having been imprisoned in relation to non-violent drug offences.

So far in 2022, Saudi Arabia has executed at least 132 people – more than the previous two years combined.

“But as a bloody year of executions draws to a close, the Saudi authorities have begun executing drug offenders again, in large numbers and in secret.”

JUST IN: Torching of Ayatollah’s house proves Iran is in grip of ‘revolution’

Referring to the infamous killing of a Saudi journalist in 2018, she added: “The latest execution came on the day after it was made official that Mohammed bin Salman will face no consequences for ordering the murder of Jamal Khashoggi.

“Proof once again that when Saudi Arabia’s international partners signal that the regime can kill with impunity, the Crown Prince and his subordinates get the message – and act on it.”

Reprieve is also highlighting the case of the Jordanian father of eight, Hussein Abo al-Kheir, who is facing execution for alleged drug offences.

A spokesman said: “Hussein was told on Friday he will be moved to a ‘death cell’, meaning he could be executed without warning in a matter of days.

“Hussein’s detention has been found to be arbitrary and without legal basis by the UN Working Group on Arbitrary Detention (WGAD), and they have called for his immediate release.”

“We are calling on the international community to ask the Kingdom of Saudi Arabia to immediately stay Hussein’s execution, and impose a formal moratorium be put in place on executions for drug offences in Saudi Arabia.”

In 2005, the Law on the Control of Narcotic and Psychotropic Substances made the following drug offences punishable by the death penalty: trafficking or smuggling narcotics; receiving such substances from a smuggler; importing or exporting narcotics; manufacturing drugs with the intent to trade; participating in any of the aforementioned activities and recidivism of possession or use offences.

Reprieve argues such offences do not meet the threshold of “most serious crimes” as defined by international standard setting bodies and so should not attract the death penalty.

However, he is widely believed to have ordered the murder of Mr Kashoggi, who was killed in Saudi Arabia’s Istanbul consulate and subsequently dismembered.

Express.co.uk has contacted the Saudi embassy in London for comment.