Home » World News » Say NO to Brussels diktat! Furious French MEP throws down gauntlet to EU as bloc in chaos 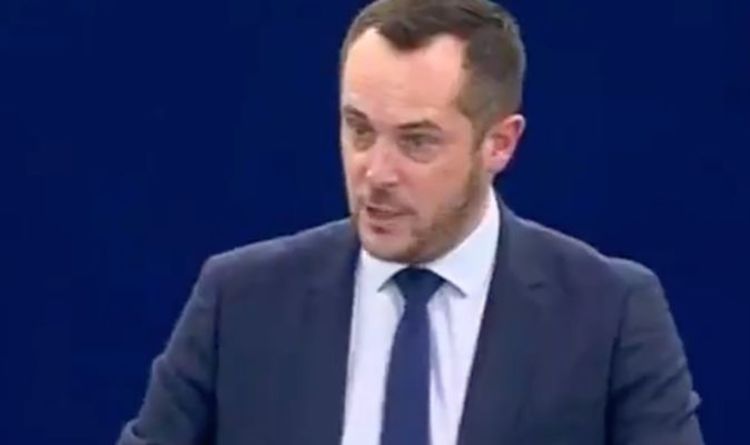 Dutch MEP has 'sympathy' for Poland's challenge to EU supremacy

The National Rally MEP blasted the EU Commission over its war of words against Poland as the bloc locks horns with Warsaw over the rule of law. Poland’s Constitutional Tribunal ruled that parts of the Polish constitution are superior to ECJ rulings, sparking Polexit fears in the bloc.

On Tuesday, Prime Minister Mateusz Morawiecki clashed with Ursula von der Leyen in the European Parliament as the EU Commission President threatened him with sanctioning measures.

But Mr Bay came to the defence of the Polish leader and blasted the Commission chief in a passionate address before Parliament.

He said: “Where does the law lie? Who defends freedom? Is the rule of law detachable from national and popular sovereignty?

“Are commissioners, civil servants and elected officials from other countries able to dictate to a nation what their way of life and governance should be?

“This is the question that brings us together today.

“Three years ago, I went to Warsaw as part of an official mission of our Parliament to investigate the reform of the Polish justice system and what was presented to us as, and I quote: ‘a systemic attack on the rule of law.’

“What I observed, as I did in Hungary a fortnight ago in a similar mission, is that these accusations have absolutely no basis.

“There is nothing, absolutely nothing. One can legitimately wonder about the impartiality of the European institutions, which are concerned about the questioning of the primacy of the law of the EU only in certain cases, and according to political calculations and motivations which everyone can see are much more ideological than legal.

“The Commission and the left wing of the European Parliament, of which the EPP now seems to be part of, as illustrated by Manfred Weber’s aggressiveness towards Poland, are engaged in a persecution of sovereign states whose conservative governments are nevertheless democratically and widely elected and re-elected, which should lead a certain number of you to be a little less arrogant, based on your electoral results.

“While the current procedures are at a standstill thanks to a wise Council decision, the Parliament continues to pretend to act under Article 7.

“And since the attacks on the organisation of Polish justice are proving to be unfounded, they find other pretexts: LGBT claims or the desire to control the sex education of children.

“And now they are holding the Polish people hostage by using the post-Covid recovery plan as a means of financial pressure.”

Reposting his parliamentary intervention on Twitter later on Tuesday, he added: “The EU blames Poland for refusing to accept lax migration and for saying NO to the moral and societal diktats of Brussels.

“The decision of the Polish Constitutional Court puts an end to the sprawling extension of EU law. Prime Minister, HOLD ON!”

Poland’s prime minister came under repeated criticism during a tense debate in the European Parliament on Tuesday, with the EU’s chief executive telling Warsaw that its challenge to the supremacy of EU law would not go unpunished.

“Your arguments are not getting better. You’re just escaping the debate,” said European Commission President Ursula von der Leyen, visibly exasperated with Poland’s Mateusz Morawiecki after more than four hours of back-and-forth in the chamber.

Von der Leyen described the Polish tribunal’s ruling as “a direct challenge to the unity of the European legal order”.

She laid out three options for a response to the Polish court’s attack on the primacy of EU law, ranging from legal action to a cut in funding and suspension of voting rights.

European Justice Commissioner Didier Reynders, speaking after a meeting of EU ministers, said the Commission would start “written procedures” against Poland in the coming weeks, adding that he planned to visit Warsaw for talks.

EU leaders are expected to discuss the issue at a summit in Brussels on Thursday. EU diplomats said a large majority of EU countries were critical of Poland, though Hungary defended it.

Brussels has long accused the Polish government of undermining the independence of its judiciary, but last week’s court ruling turned a stand-off into a full-blown crisis, raising fears that Poland could eventually exit the bloc.

Poland’s ruling nationalist Law and Justice party says it has no plans for a “Polexit” and – unlike Britain before its Brexit referendum in 2016 – popular support for EU membership remains high in Poland.

In an open letter sent before his appearance at the EU assembly in the French city of Strasbourg, Morawiecki complained of EU mission creep that would lead to a “centrally managed organism, governed by institutions deprived of democratic control”.

He doubled down on that view in the parliament debate on Tuesday.

“EU competencies have clear boundaries, we must not remain silent when those boundaries are breached,” he said. “So we are saying yes to European universalism, but we say no to European centralism.”