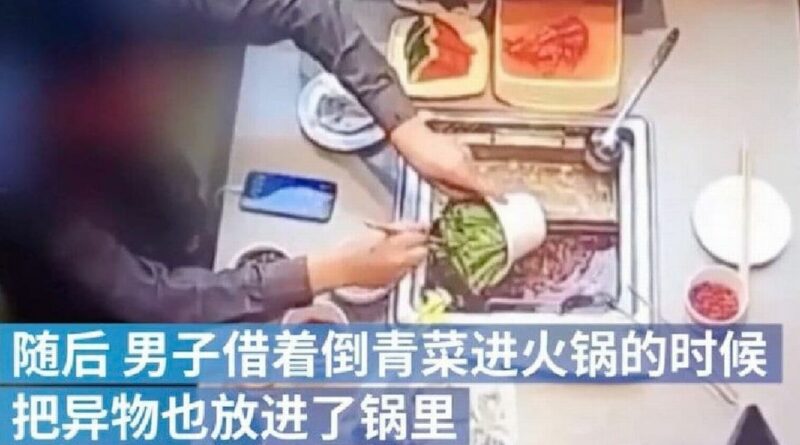 A scammer has been arrested after trying to claim he found a cockroach in his food at two different restaurants in twenty four hours.

The man, referred to as Mr Cai, decided to spend the day visiting two branches of China's Haidilao chain of hotpot restaurants, and both times complained about a cockroach in his meal.

Restaurant staff were complained to by Cai at both branches, according to Sohu.com.

And to keep their disgruntled guest happy the restaurants offered him a free meal and 1000 yuan (£126) and 800 yuan(£89)respectively.

Later viewings of CCTV revealed fears that the restaurant staff had been duped by the man and the incidents were reported to the police.

Closer investigation of the footage found that the man had actually been holding the cockroach behind his phone and dropped it in the hotpot when unattended.

The scammer called over the waiter as soon as he scooped the cockroach out of his meal.

A similar incident unfolded in 2018 after a man dropped a dead rat in a hotpot at a Haidilao restaurant.

The man, known as Guo, asked for 5 million yuan (£560,000) as compensation for the staged rodent hotpot.

The virality of the incident sped up the catching of Guo, who was sentenced to three years in prison for the scam.

He was charged with scamming, damaging Haidilao's reputation and filing a false report to regulatory authorities.

The Haidilao chain was also targeted by a woman who claimed she found a sanitary pad in meal in 2018.

In true Haidilao fashion, the incident turned out to be a scam and the woman had placed the item into the hotpot herself.

The hotpot chain is one of China's most-popular hotpot chains and have been in operation for over twenty years.

All of their chains sport multiple surveillance cameras to help protect their brand and their staff from being unfairly scammed.

Haidilao has a UK branches in London's China Town and The O2. Both branches are rated four out of five on Google reviews.