Is this Nessie? Schoolgirl, eight, snaps mysterious footage of something long and thin splashing about in waters of Loch Ness

A  schoolgirl has captured footage of something mysterious glittering in in the waters of the Loch Ness.

Could this be the Loch Ness monster?

Eight-year-old Laria Annand was visiting the loch with her grandmother, Marie, when they noticed strange movement in the water and the light bouncing off a long unidentified object.

There were no boats or people around so Marie, a teacher from Inverness, immediately grabbed her phone and took some pictures.

Laria then asked her grandma if she could use the phone and managed to capture the bemusing footage. 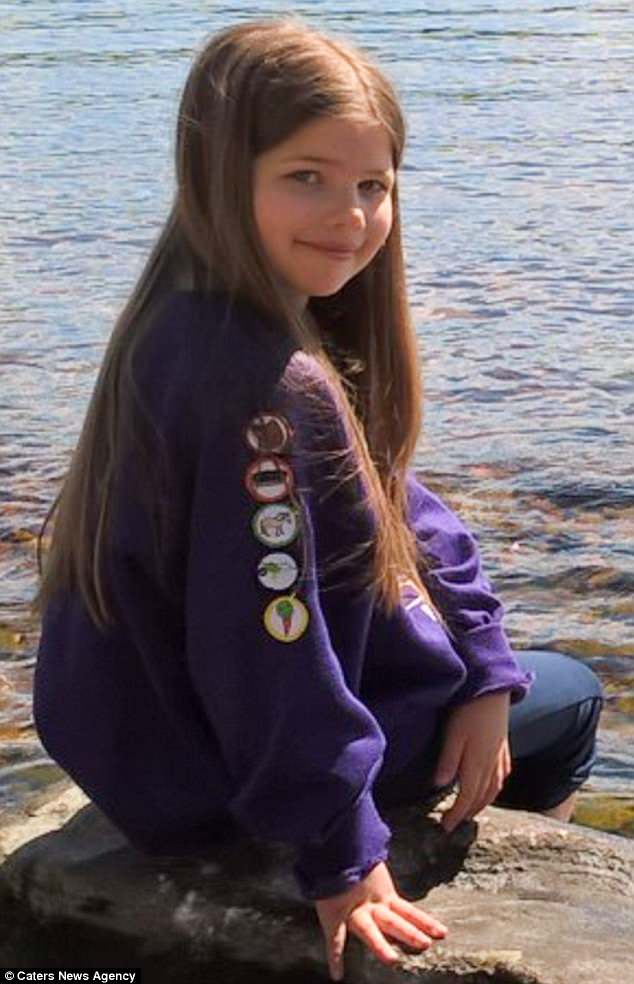 Eight-year-old Laria Annand was visiting the loch with her grandmother, Marie, when they noticed strange movement in the water

‘We were just taking silly pictures of each other and splashing our feet in the water.’

‘I just looked up and that’s when I spotted the flickering in the water.

‘It looked as though the light was bouncing off something but there were no boats or people and it was something long – very long. 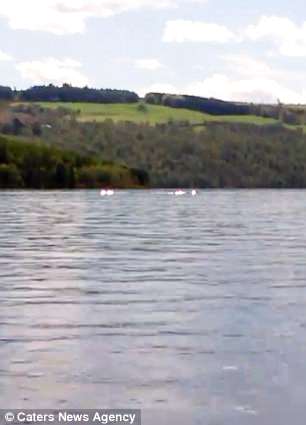 They cant explain the strange flickering they saw in the water, so they think it must be the legendary monster

‘I had to do a double take because there was just nothing to explain it.

‘I took a few pictures and then my granddaughter asked if she could take a picture. I didn’t realise at the time but that’s when she shot the video.

‘It was weird. Really strange. I can’t explain it so the only thing I can think is we have seen the Loch Ness Monster.’ 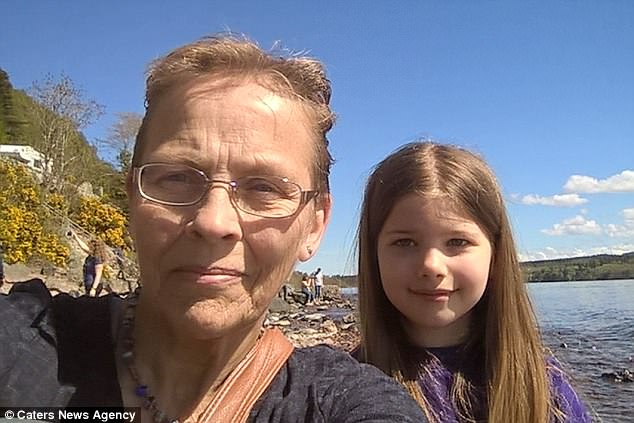 Laria’s grandmother, Marie, 62, said: ‘I had to do a double take because there was just nothing to explain it’

Myth or Legend? Has anyone actually seen Nessie in real life?

While there has never been any definitive sightings or proof that Nessie is real, people have been claiming for over a millennia that they have seen her.

The first sighting of Nessie was thought to be in 565, when Scottish Saint Columba banished the monster to the Loch.

The legend says Columba came across some locals who were burying a man who had been attacked by a ‘water beast’ .

When the creature returned to attack again, Columba fought it off and ordered it to ‘go back’ to the Loch.

In 1933 George Spicer and his wife claimed they saw ‘a most extraordinary form of animal’ which was 4ft high and 25ft long crossing the road near the loch.

Arguably one of the most famous sightings was in May 1934, when a local paper in Inverness published photos of what they described as an enormous, dinosaur-type creature swimming in the Loch.

The iconic images became the most famous pictures of the monster, although it was later revealed to be a hoax made with a toy from Woolworth’s.

And in 1935, renowned big game hunter Marmaduke Wetherell found a footprint he said was the monster’s. It was later revealed to have been made by him using a dried hippo’s foot of the type used as umbrella stands at the time.

Despite many recording sightings over the years, most have been revealed to be hoaxes and scientists do not give credence to the suggestion that a monster lives in the loch.

Most recently, people claimed they has seen the beast on holiday in a canal in Gloucester, 500 miles from its watery home.

Last month the creature was spotted in the Solent near the Isle of Wight, 630 miles away from the loch, maybe on a tour of the UK waters?

In 2017, Nessie had a ‘record year’ of sightings, with eight ‘official’ sightings being reported.

This makes the year busier than any other this century, reports the BBC.

But no one has ever come up with a satisfactory explanation for the sightings – although earlier this year ‘Nessie expert’ Steve Feltham, who has spent 24 years watching the Loch, said he thought it was actually a giant Wels Catfish, native to waters near the Baltic and Caspian seas in Europe.

An online register lists more than 1,000 total Nessie sightings, created by Mr Campbell, the man behind the Official Loch Ness Monster Fan Club and is available at www.lochnesssightings.com.