Barcelona: Scientists from around the world called for stepped-up efforts to use forests to keep global warming to the lowest limit agreed by governments in 2015, as a key report on how to meet that goal is finalised in South Korea this week.

"Forests really are the unsung hero of our struggle to address climate change," said Deborah Lawrence, a University of Virginia professor and one of 40 scientists who backed a statement emphasising how the Earth's climate depends on forests.

The natural processes by which forests suck in and store carbon help reduce levels of planet-warming carbon dioxide in the atmosphere – and forests also underpin key parts of the world's economy, the scientists said. 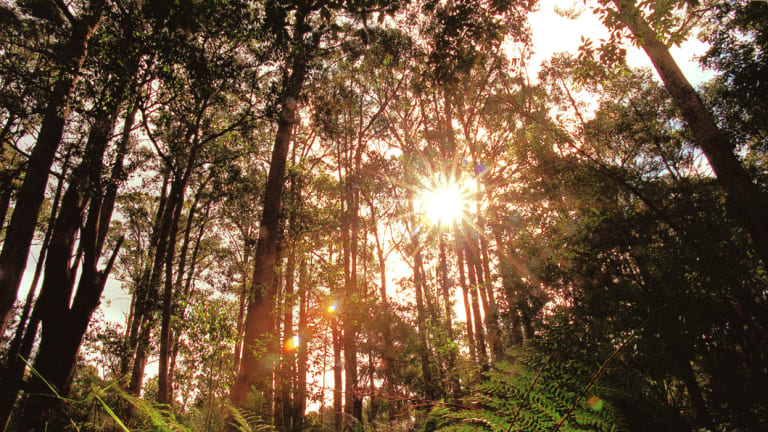 “Our planet’s future climate is inextricably tied to the future of its forests,” the international panel said.  Credit:Fairfax Media

Yet humans have let forests become degraded, even as the resulting risks of disaster and the costs of repairing the damage rise, they added.

"We must protect and maintain healthy forests to avoid dangerous climate change and to ensure the world's forests continue to provide services critical for the well-being of the planet and ourselves," said the statement, signed by researchers mainly from the United States, Brazil and Europe.

"Our planet's future climate is inextricably tied to the future of its forests."

The flagship report from the Intergovernmental Panel on Climate Change (IPCC), due to be published on Monday, will outline ways of limiting global temperature rise to 1.5 degrees Celsius (2.7 degrees Fahrenheit) compared with pre-industrial times, the most ambitious goal in the Paris climate pact.

One key route is to protect virgin forests, restore those that have suffered logging, fires or other harm, and expand the amount of land covered by trees, the report is expected to say.

In this week's statement, scientists noted that forests remove about a quarter of the carbon dioxide humans add to the atmosphere, keeping climate change from getting even worse.

Destroying forests not only releases the carbon they contain but also eliminates their ability to take carbon dioxide out of the atmosphere, the statement said.

It noted that the world’s forests contain more carbon than exploitable oil, gas and coal deposits.

But deforestation rates are rising again in most of the tropics, due to expanded production of commodities such as palm oil, beef and grains, said Carlos Nobre, a University of Sao Paulo professor and member of the Brazilian Academy of Sciences.

Forests produce water vapour, boost rainfall and cool down local temperatures by as much as 3 degrees Celsius, Nobre noted.

"This is a critical element for growing food," he said. "By keeping a wetter climate throughout the year, (forests) also mitigate the impacts of drought and are less vulnerable to fires."

But as the urgency of curbing rising temperatures increases, that is starting to change, they added, with attention shifting not just to forests but also to how land is deployed to produce crops for food and energy.

"There is a greater recognition in society as a whole that the land-use sector makes a difference – and the way that happens in people's everyday lives is what they eat," said Jennifer Morgan, executive director of Greenpeace International.

That is one strategy recommended in a separate report to be published in mid-October by the Climate, Land, Ambition and Rights Alliance (CLARA), a coalition of environment and development groups.

The measures proposed – ranging from planting more trees on farms to feeding animals with agricultural leftovers and restoring major areas of forest – would cut emissions by 21 gigatonnes of carbon dioxide-equivalent per year by 2050, or about two-fifths of total greenhouse gas emissions in 2016.

The alliance said that would eliminate the need for largely untested technologies to remove carbon from the atmosphere.

Those methods include growing trees and crops to produce energy and then capturing and storing underground the carbon dioxide they release when harvested, an approach known as BECCS.

Kate Dooley of the University of Melbourne's Climate and Energy College, and the main author of the CLARA report, said scientific models show BECCS would require a huge amount of land to be effective in meeting temperature limits, which would be "problematic".

Opponents of BECCS argue it would take away land and water needed to end hunger and meet other global development goals, and could lead to abuses of indigenous land rights, among other risks.

"We can achieve the 1.5C pathways in the IPCC report – the safest pathways – through natural (land) sink enhancement," Dooley said.