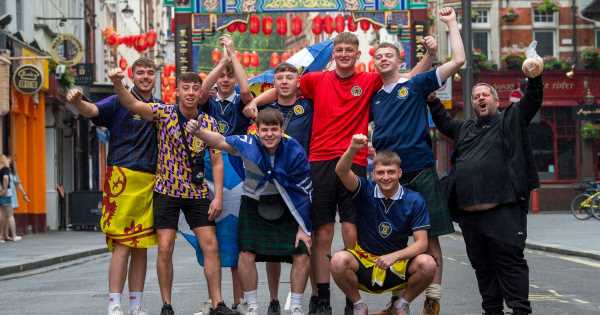 Scots have travelled south in their droves to get the party started over 24 hours before watching the national side kick-off against England in Group D of Euro 2020.

However they were angry to find their traditional party spot of Trafalgar square, surrounded by barriers and no other safe fan zone set up specifically for travelling support, the Daily Record reports.

A sea of supporters wrapped in flags and dressed in kilts started flooding King's Cross station on Thursday with packed-out trains arriving from Glasgow.

Rather than rest up ahead of what is set to be a riotous match day, fans pitched up outside the station to make their voices heard.

Despite just 3,000 tickets issued to the travelling support, up to 20,000 Scots are expected to cram into parks and pubs across London to watch Steve Clarke's men at 8pm, The Sun reports.

Yet Trafalgar Square is not one of them.

Liam Moore, from Dalkeith, said: "It was obvious that thousands of Scots would be coming down – ticket or no ticket – so they should have arranged facilities.

"The talk is about keeping people safe but if a fan zone is safe for NHS workers it would be safe for Scotland fans."

"What will happen is big numbers of fans getting together in any case. But we’re not that bothered as we’ll have a good time anyway."

H&M worker Liam, 23, said his biggest concern was getting a safe place to see the match.

He said: "We have tried to book so many places but they’re all booked out.

"We want to avoid a situation of wandering about before kick-off with a good screen and commentary for the match. We’re still working on that."

Some fans even suggested they would invade Hyde Park for the game even though no giant screens have been erected for the tournament.

One Scot who has not had to arrive in the capital by rail is Sarah Dollard who proudly flies the Saltire outside her flat, in what has been dubbed England's most patriotic housing estate.

The 31-year-old is outnumbered by 500 St George's on the Kirby estate in Bermondsey, south London and says "it has had everyone talking".

Sarah has lived on the south London estate her entire life but supports the Scots as a result of her Glaswegian dad Mick, 64, The Scottish Sun reports.

She said: "My flag stands out like a sore thumb!

"It’s a great laugh. It has had everyone talking.

"Everyone has found it hilarious. I thought I would display the Saltire to show my support for Scotland.

"People have been trying to change my mind and tell me I should swap to England because they’re going to go further. But I’m happy to support Scotland.

"I’m confident we’ll win. I know England have had a much better start but this is where the form book gets thrown out the window.

"It could bring us right back into the competition."

Scotland's 2-0 defeat to the Czech Republic on Monday was their first fixture at any international competition since 1998 but the result looks to have done little in the way of dampening spirits.

The latest instalment of the oldest fixture in international football will matter even more than when they most recently clashed at Wembley with World Cup qualification at stake in 2016.

That day under the Wembley arch, it was Daniel Sturridge, Adam Lallana and Gary Cahill who netted for the home side in a 3-0 win over the Auld Enemy.

You have to go back 20 years for the last time the sides faced off in a European Championship, which holds better memories for Three Lions fans than those north of the border.

Gazza celebrated his goal in a 2-0 win with his now infamous dentist chair celebration at the old Wembley stadium.

Gareth Southgate's stars will hope the 20,000 home fans will be enough to drown out even the liveliest of Scotland supporters in attendance.