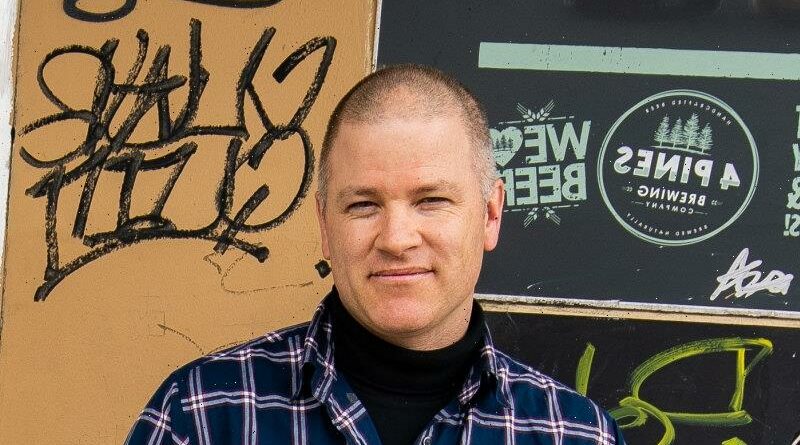 Councils that rely on residents and business owners to clean up graffiti themselves are encouraging its recurrence, experts say, as new crime figures show criminal incidents are rising across the state.

Statewide, criminal incidents of graffiti rose to 3133 last financial year, compared with 2762 incidents the year prior, according to Victoria’s Crime Statistics Agency. 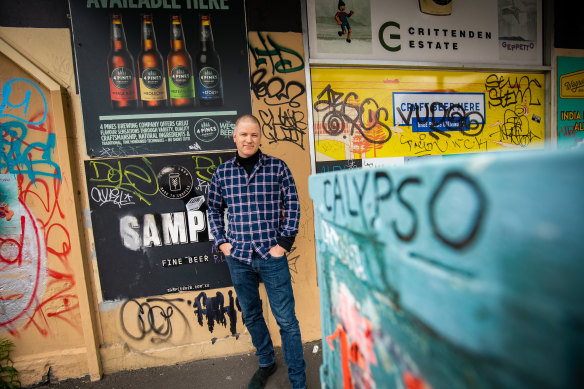 Councils including Yarra, Merri-bek, Boroondara and Knox rely on residents in most instances to remove graffiti from their homes and businesses with council-supplied kits. Merri-bek offers paint vouchers and Yarra offers two free removals per property per year.

However, the City of Melbourne – one of the worst areas for criminal graffiti incidents, which rose to 395 in the area, compared to 272 in the previous 12 months – takes the opposite approach.

“Fast removal reduces reoccurrence,” said Jorja Pindor, director of waste and recycling, in a management report to be presented to the Future Melbourne Committee on Tuesday.

“Removing graffiti consistently and quickly is one of the best methods to prevent it reoccurring in the same location,” she said.

“We have councils on our database who range from Geelong and Casey who pretty much have a policy of removing everything. There will be other councils who don’t do that, they will only remove graffiti from their own property.”

Criminal incidents of graffiti mostly fell in councils using the VICGR app, part funded by a grant from the Department of Justice’s Community Crime Prevention program. In Greater Geelong, incidents fell from 139 the previous financial year to 129 last financial year.

But in Yarra, there were 155 criminal graffiti incidents last financial year, up from 147 in the previous 12 months.

Eyles said crime statistics were only a fraction of graffiti incidents. “That would be less than five per cent of graffiti removed in this state.” “Everyone should be reporting it to council. That is the body that should be dealing with it. Whether they do is another thing.”

Businesses along Sydney Road in Brunswick are frustrated with graffiti incidents, despite criminal incidents decreasing from 88 to 79 last financial year in the Merri-bek Council area.

Business owner Nicholas Ross said he received an unsatisfactory response after emailing the council about graffiti covering the front doorsteps of his Brunswick Secondhand Bookshop.

The council told Ross that it had a dedicated team of graffiti removers. 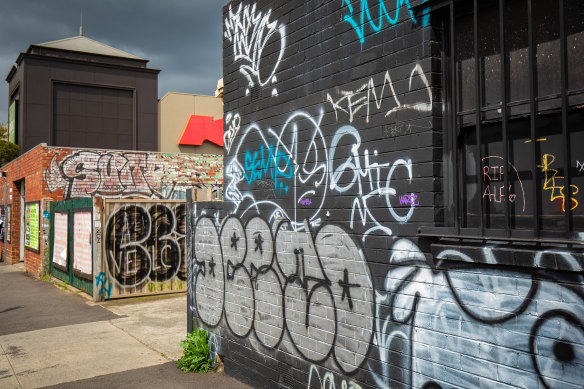 Graffiti near the corner of Sydney Road and Weston Street in Brunswick.Credit:Scott McNaughton

“Last time I saw them [graffiti cleaners] was probably the beginning of COVID, at least two years ago,” the shop owner said.

Members of the public are encouraged to report vandalism on public properties managed by Merri-bek Council, while business owners are given free kits to scrub and remove graffiti.

But Ross said this did not help. “It [the kit] will work on glass or metal… but it doesn’t work on brickwork, or any solid surface. It’s really useless.”

They send us a bucket, so they ask us to do it ourselves.

Meanwhile, downstairs from Ross, graffiti prevents bottle shop Grand Cellars from advertising craft beers on its own wall. “There’s no way to stop it” said owner Annie Zhang. “Council don’t want to do anything, we pay a lot of council fees.

“When we asked them if someone can help me paint the wall, and [they] said no. They send us a bucket, so they ask us to do it ourselves.”

Data gathered during the City of Melbourne blitz prompted the council to announce it would send its Rapid Response Clean Teams outside the CBD for the first time to five graffiti hotspots:

“For the first time, we’re proactively rolling out our Rapid Response Clean Team outside the CBD to keep even more neighbourhoods clean from graffiti,” said Lord Mayor Sally Capp.

“We’ve more than tripled the amount of graffiti cleaned every month since the start of the pandemic and seen graffiti reporting double in this time.”

There is less graffiti on the Metro train network this year.

In 2018, about 66 graffiti and vandalism incidents each month disrupted services. These have dropped 35 per cent to 43 incidents a month this year.

From February police launched a graffiti blitz called Operation Fade and arrested nearly 40 offenders. A further 10 offenders were identified in the past two months. Two were charged, seven charged on summons and one issued with an infringement notice.