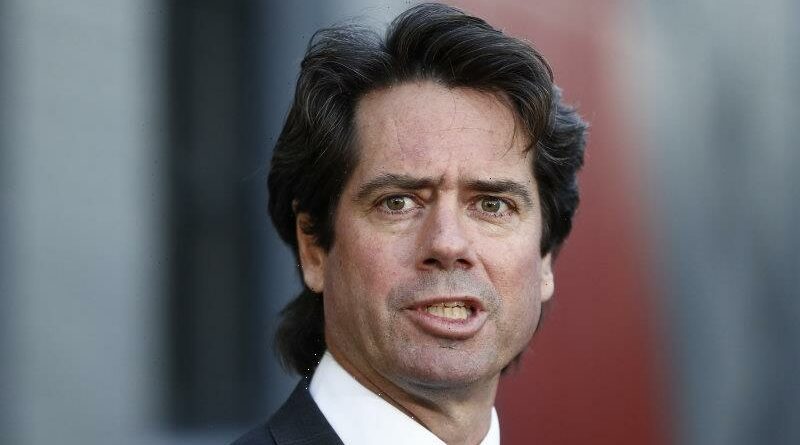 But the man who merely has to utter “AFL grand final” to cast as mesmeric a spell as “open sesame” on hard border obsessive state premiers Mark McGowan and Annastacia Palaszczuk has just found the anti-lockdown politics has come to him.

This week the exterior wall of Casa McLachlan in leafy Prahran was defaced by a scrawl of impassioned graffiti which read “End the curfew. Suicide is killing Victoria.”

No sign the anti-lockdown vigilantes knew whose property they had targeted. And McLachlan’s property was not the only one hit. CBD is told that along the mean streets of Prahran, about a dozen grand properties were similarly defaced. 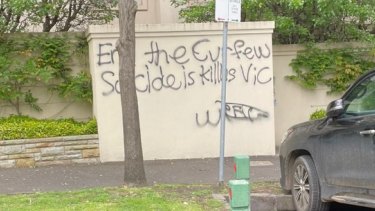 Anti-lockdown scrawlings outside the home of AFL boss Gillon McLachlan.

The chief executive who might/might not depart the AFL next year bought his house for $4 million in 2012 with wife Laura Blythe, daughter of former Spotless chairman, Brian Blythe. They reside there with their four children.

The house is the scene of McLachlan’s famous annual coaches dinner, where the AFL chief would invite the competition coaches around to chew the fat while they chewed on beef burgundy and sticky date pudding.

It has to be said that, like the protesters, the residents of Prahran might not be fans of Premier Daniel Andrews’ masks and lockdown policies but were more likely to mutter this to each other as they circled the Tan rather than via a spray can.

But it says something when even all that power you is no protection from protest street art. 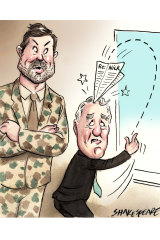 Mark O’Brien has a lot on his plate as the defamation lawyer for former special forces soldier and burner phone enthusiast Ben Roberts-Smith, who is suing this newspaper for defamation over war crime allegations.

And O’Brien doesn’t take prisoners. After all, his own website indicates no less than twice that he is “feared”.

O’Brien is used to firing off aggressive missives. Recently he aimed one at investigative reporter Nick McKenzie, who has done much of the journalistic heavy lifting on war crimes allegations, writing to McKenzie’s boss, Nine executive James Chessell and accusing McKenzie of sending an unsolicited and concerning message to another of O’Brien’s clients.

A message, purporting to be from McKenzie, which contained serious defamatory allegations was sent via a form on the website of the high-profile former special forces soldier Heston Russell. Russell once worked for boujee gym chain Barry’s before befriending broadcaster Alan Jones and Senator Jacqui Lambie and setting his sights on a pro-veterans political career. He might have to clear up a legal fight over fees for veteran supporter pins first.

One problem: McKenzie never contacted the website, he wasn’t conducting any such journalistic investigation and wasn’t even aware of any allegations against Russell. But he is now.

“It was quite an intimidating message, which was another reason to think it was Nick McKenzie,” O’Brien told CBD.

Police have been called in to investigate.

Choir of Hard Knocks former musical director Jonathan Welch AM has moved via CBD to clear up confusion over his Play It Forward musical education company, which is not a registered charity, as we reported yesterday.

But it’s not the only legal matter on Welch’s music stand.

Readers will recall that the choirmaster, who hit prime time 15 years ago when he joined the Choir of Hard Knocks for the homeless and disadvantaged and featured in an ABC docuseries, was recently in the Administrative Appeals Tribunal over his right to register the business name “Voices of Casey Choir” with ASIC.

The AAT said no, as the name was too similar to the “Voices of Casey” a choir where Welch used to be musical director. The choir manager Paulien George, a former friend of Welch, had earlier registered that name and took action in the AAT. Very messy.

At the same time, Welch was attempting to file a trademark for Voices of Casey.

IP Australia said applications have been filed but the name had not been registered.

But now Welch has a change of heart, telling CBD: “Given the damaging media attention the Voices of Casey name and brand has now received, we are choosing to focus our energy where it should be, on the singers, and withdraw our trademark application as the goodwill it (the name) once had, has been irrevocably tarnished.”

But the fat lady has not quite sung yet.

And Morgan has lodged a counterclaim, saying that Welch’s School of Hard Knocks is in itself a breach of Fremantle Media’s trademark for the Choir of Hard Knocks.

Talk about a cadenza.