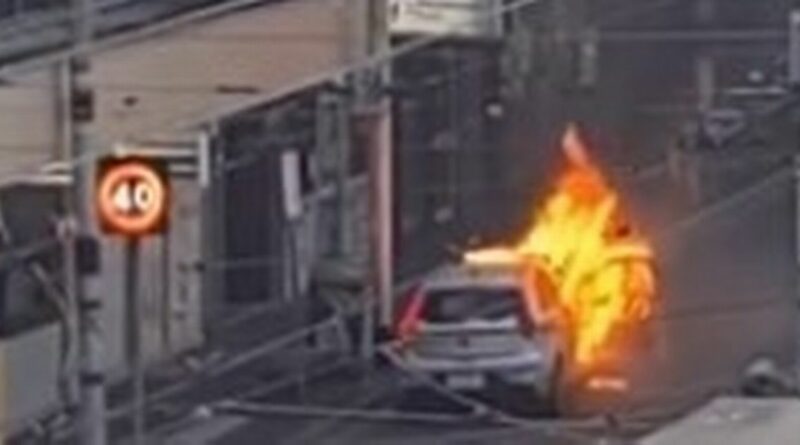 A man has suffered life-threatening burns after setting himself and his car on fire.

The incident occurred in Richmond, Australia, last Saturday, and the man was allegedly heard screaming about the country's strict coronavirus restrictions.

He was found in a silver hatchback, outside a local restaurant, at the time.

Police and firefighters attempted to cover extinguish the flames with water but needed the help of five other people to do so.

Other bystanders helped police to restrain the man until the officers were able to pin him to the ground.

He was then taken to hospital, via ambulance, where he was treated for "life-threatening injuries", police said.

One witness told local news that the man's flesh was "burning before the flames were put out with water".

They said: "His skin was burning. He was on fire. His skin is stuck to my shirt.

"He was off his face screaming about the mandates."

And another witness, Lydia O'Connor, who was having dinner said: "He poured gas on himself and on his car – It was on purpose.

Victoria Police confirmed the reports of a man "self-harming".

There are currently more than 137,000 active cases of Coronavirus in Australia, which is in stark contrast to July 2021, when just 200 cases were reported in one day.

Just 13 people had died yesterday, having tested positive within 28 days, bringing the country's total of deaths to 2,239 since the pandemic began.

Mask wearing, large event restrictions and other restrictions are in place – varying depending on which part of the country you are visiting.

And Aussie Police brought in the New Year by arresting 90 people across the state last night while issuing more than 150 move-on notices, due to people falling foul of Covid restrictions.

For more of the latest news from the Daily Star, make sure you sign up to one of our newsletters here