The shocking video shows the courier pleading with one man in a black hoodie not to shoot the revolver at him outside Barclays Bank, Liverpool Road, Cadishead, Salford.

A second man wearing a grey sweatshirt is seen searching the courier while he holds out his hands in desperation.

Seconds later the gun is fired into the air and the robbers snatch an empty cash box. 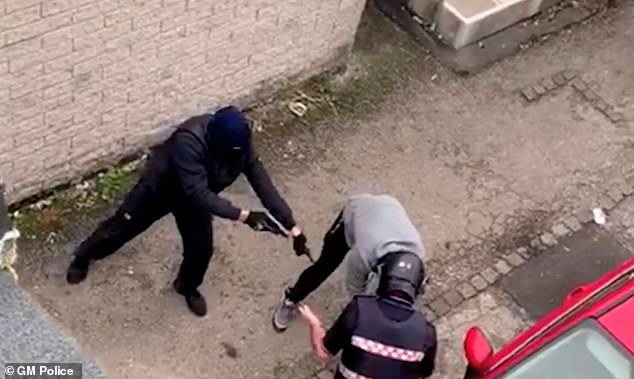 The man in black wearing a balaclava threatens the cash-in-transit courier with a loaded revolver while the other in a grey sweatshirt looks for cash outside Barclays Bank, Liverpool Road, Cadishead, Salford 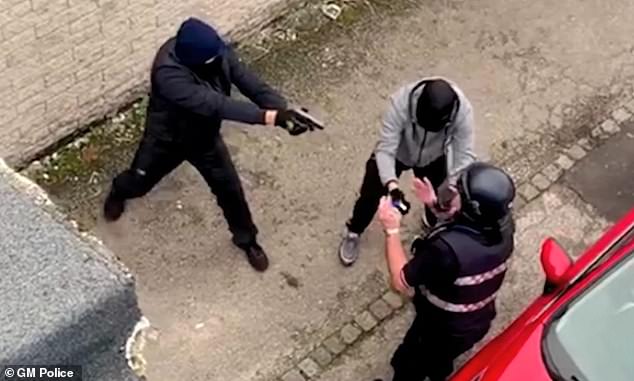 They then left in a purple VW Golf with tinted windows before setting the vehicle on fire near Allotment Road, Cadishead.

Police were called at 2.20pm on Monday 23 where the courier was found unharmed.

Greater Manchester Police have released footage of the incident and are appealing for anyone with information to come forward. Sergeant Karl Dalton of GMP’s Salford District said: ‘As the footage shows – this was a terrifying ordeal to live through for the cash-in-transit courier.

‘Thanks in part to his remarkably calm handling of the situation, he was left unharmed and despite the psychological impact of crimes like this, he is recovering well.

‘The footage we have released is very clear. While the men have their faces covered, we’re confident that someone may recognise them.

‘The car they left in is also quite distinctive. Did you see it in the area prior to or after the incident?

‘Even the smallest piece of information can often be enough to help officers solve crimes like this. If you know something that can assist us, please get in touch as soon as possible.’