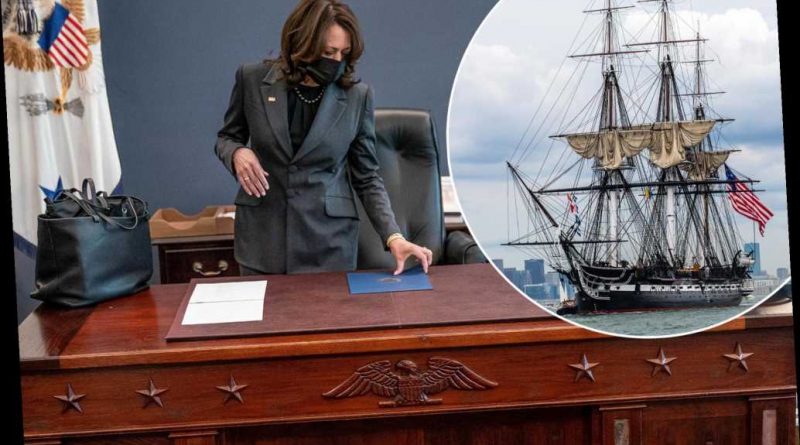 Vice President Kamala Harris now has her own “Resolute” desk, crafted from materials from the historic USS Constitution warship.

The desk was built by US Navy Seabees and delivered to the White House in February, according to outlets including Military.com.

Featuring intricate patriotic carvings of eagles and stars, the desk was made using wood, copper and nails taken from the Constitution during two renovations of the frigate between 2007 and 2017, the outlet reported, citing Paul Taylor, a spokesman for Naval History and Heritage Command, which headed up the project.

Harris’ desk was one of two “heritage desks” constructed by the Seabees this year, with the other delivered to the office of the secretary of the Navy, now Thomas Harker in an acting capacity, Military.com reported.

That desk includes not only materials from the Constitution, but also several other famous American warships, including the USS Chesapeake frigate — also commissioned in 1794 — and the battleship USS Arizona, sunk during the attack on Pearl Harbor.

A drawer on the Navy secretary’s desk features pen trays built with a piece of the Arizona.

The project was approved under President Trump, and construction on the desks began on Jan. 4, while he was still in office.

“Each of these historic warships, like so many other vessels throughout the history of the Navy, embody the honor, courage, and commitment of those who served in them,” Taylor told Military.com. “More importantly, the desks will be lasting reminders to our civilian leaders that today’s Navy and our diverse sailors and Marines are deployed forward — alongside our allies and partners — to deter aggression and preserve freedom of the seas.”