Official says 63 survivors were plucked from the water after three ferries capsized in bad weather. 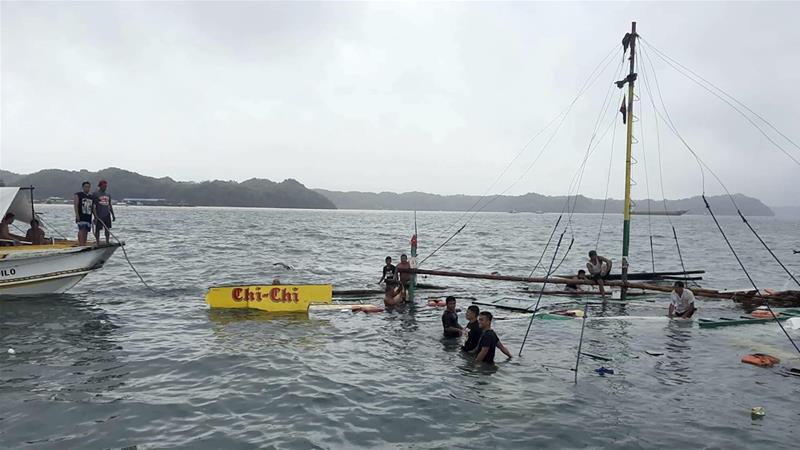 At least eleven people have died and three others were missing after three ferry boats capsized in rough seas off the central Philippines, according to local officials.

All three vessels plied the short 20-minute hop between the port city of Iloilo and the island of Guimaras, with two of the accidents happening at almost the same time, forcing the coast guard to temporarily shut down ferry services.

Services resumed in the afternoon, which was when the third boat capsized, the coast guard said.

“The winds and the waves suddenly became strong,” coast guard spokesman Armand Balilo told reporters, adding that one of the ferry boats, M/B Chichi, was carrying at least 42 passengers.

Ten of the fatalities were aboard the M/B Chi Chi, which capsized after being battered by strong winds and huge waves.

Another boat, M/B Keizha, reportedly had four crewmen on board, while the third ferry, M/B Jenny, carried around 30 passengers on board, according to local media reports.

One victim died in the sinking of the M/B Jenny.

Philippine Red Cross posted pictures of two of the vessels on social media, showing one turned upside down as rescuers swam nearby, while the other was almost completely sunk with just the bow above water.

Video from ABS CBN TV network showed a rescuer carrying a child from a motorboat to an ambulance in an Iloilo pier, where frantic relatives waited.

Forecasters have warned of heavy monsoon rains and thunderstorms amid a brewing storm about 875 kilometers off the country’s eastern coast.

Classes and work have been suspended in the Philippines’ capital, Manila, amid heavy rains and flooding, which caused heavy traffic jams on Friday in low-lying areas of the city.

About 20 typhoons and storms batter the Philippines each year, making the archipelago that lies on the Pacific typhoon and earthquake belt one of the most disaster-prone countries in the world.

The weather bureau said the disturbance was expected to strengthen into a tropical depression in the next 24 to 35 hours and bring more rains.