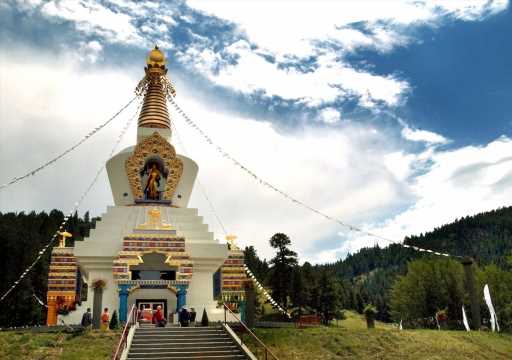 The Shambhala Mountain Center in Larimer County filed for Chapter 11 bankruptcy protection this week as it restructures debt in the wake of financial struggles brought on by the pandemic, the Shambhala Buddhism sexual misconduct scandal and the Cameron Peak fire.

The bankruptcy filing, made Monday in federal court in Denver, follows the Buddhist retreat’s announcement last month that it’s changing its name to the Drala Mountain Center after becoming an independent nonprofit organization.

The center near Red Feather Lakes ran into financial difficulties in early 2019, in part, because of the shortfall in program revenues brought on by cancelations due to COVID-19 closures and the “the crisis in the larger Shambhala community,” according to a news release.

The 2020 Cameron Peak fire, the largest wildfire in Colorado’s recorded history, further hampered the center’s abilities to generate revenue after a number of buildings and other infrastructure were destroyed.

According to its Chapter 11 filing, the Shambhala Mountain Center and Wells Fargo bank entered into a restructuring agreement on July 29, 2015, that consolidated all of the center’s outstanding debt into a single secured loan of $4.15 million. Wells Fargo commissioned an appraisal of the center’s primary real estate and valued the property at $7.7 million, according to a document dated Dec. 10, 2020.

In May of 2021, Wells Fargo sold the secured Shambhala Mountain Center debt loan to RH Fund XXII LLC, a “distressed debt fund” manager, according to the bankruptcy filing.

The new debt holder did not agree to a request by the Shambhala Mountain Center to restructure the debt, which led to the protected bankruptcy reorganization filing, the organization’s news release said.

As part of the Chapter 11 filing, the Shambhala Mountain Center has a $500,000 matching donation commitment from the Pema Chödrön Foundation, according to the news release. Other major donors have committed more than $250,000 toward the reorganization. The center is represented on a pro bono basis by Ropes & Gray, a global law firm.

The renamed Drala Mountain Center, or DMC, plans to continue to operate, at its Red Feather Lakes campus, during the reorganization and it anticipates that the Chapter 11 process will be complete in about six months.

“We recognize the important role DMC plays in the lives of so many people, particularly during these challenging times when people seek restoration, refuge and inspiration,” Executive Director Michael Gayner said in a statement. “We  look forward to fulfilling our mission of bringing people together to experience wisdom in the coming weeks and months, and for years to come.”

Shambhala, the Boulder-born Buddhist community now headquartered in Canada, became embroiled in scandal in 2018 following the release of a report by a group called Buddhist Project Sunshine that levied sexual abuse allegations against Shambhala leader Sakyong Mipham Rinpoche, who ultimately stepped back from his duties. Third-party investigations commissioned by Shambhala corroborated some of those allegations.

A subsequent investigation by The Denver Post found that Shambhala and its leaders had a decades-long history of suppressing abuse allegations, including child molestation and clerical abuse, through the organization’s own internal processes.

Some of those accusations directly involved the Shambhala Mountain Center, including claims that center officials disregarded pleas for help. In 2018, the Larimer County Sheriff’s Office opened a criminal investigation into alleged sexual misconduct by people connected to the center, though that case was closed in 2020 without any charges.

Following publication of The Post’s investigation, the Shambhala Mountain Center’s leaders released a statement apologizing for their failure to appropriately address sexual misconduct and abuse at the meditation center.

In June of 2020, Michael Smith, a former member of the Boulder Shambhala Center, pleaded guilty to first-degree assault and attempted sexual assault on a child and was sentenced to 20 years in prison. Prosecutors alleged Smith sexually abused a girl — who he’d met through the Shambhala community — multiple times starting in 1997.

Separate sexual assault charges against a former teacher at the Boulder Shambhala Center were dismissed in October of 2021.